Here’s a shocker: Americans have very, very little confidence in the fourth estate.

Gregg Levine of Al-Jazeera America reports that trust in television and news media has reached an all-time low, bringing it on par with trust in news on the internet. The internet. Yikes. 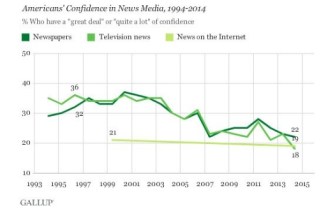 As you can see, the report is based on a recent Gallup poll that tracks confidence in news media. While strong trust in web-based news has remained consistent (even if consistently low) for about fifteen years, optimism for traditional news media has been on a noticeable downward trend.

Also notable is the ideological gap when it comes to faith in newspapers: 15% of conservatives vs. 34% of liberals. Compare that to television news, which boasts no ideological confidence gap. Everyone seems to hate it equally.

It’s important to note that the decline in confidence coincides with the rise of the internet as a news source. Even if trust in the internet remains stagnant, the tactics employed by TV and print journalism to try and stay relevant often seem to backfire. Also notable: the widening gap between conservative and liberal viewpoints, not to mention the growing contentiousness with which they consider each other. The partisan gap between trust/distrust in newspapers seems to reflect that.

Of course, there are many reasons why the public seems unable to take television news seriously.

And although many American newspapers still do fantastic investigative journalism, they also publish stuff like this and this and this. Covering topics you’d expect on Buzzfeed hurts the organization’s journalistic reputation. Whether or not doing so helps keep them afloat is a whole other topic. What’s certain is that newspapers’ transitions into full-fledged multimedia machines comes at a cost of credibility.

Finally, Levine makes a salient point about what the public’s distrust means for traditional media’s share in zeitgeist control:

While the numbers across all three venues are dreary, the trend lines are important. With the decline in faith comes a decline in traditional media’s ability to influence public opinion and political debate. If the trends continue (and it is hard to find a reason why they won’t), the Web would soon be the most influential media component in the national conversation.

What is blended learning? Benefits, best practices, and more

Blended learning reflects how people learn and develop naturally every day. Here’s how to put it into practice.
13.8

It is time to give the Russian cosmologist the credit he deserves.
The Future

It is often assumed that AI will become so advanced that the technology will be able to do anything. In reality, there are limits.
High Culture

With a new telescope on the horizon, we reflect on the best pictures of space that came before.
Up Next
Culture & Religion

As Disney’s Frozen continues to climb the ranks of highest grossing films, its popularity is beginning to pay dividends for the Norwegian tourism industry. The nation’s beautiful locales served as inspiration for Frozen’s fantasy Kingdom of Arendelle.