You planned it as a joyful time: A chance for the young ones to be with their grandmother who’s probably not going to be around that much longer. A cherished memory in the making. And then it comes out of Grandma’s mouth: A statement so full of hate you just hope those impressionable little ears didn’t catch it. It may be a racist comment or a homophobic slur, but whatever type of prejudice it reveals, it’s likely to be jaw-dropping. Whoever its target, it’s about “those people,” and unmistakably nasty. What on earth? Isn’t this the same woman who raised you to be the inclusive person you are? What you do know is that you now have the tricky task of teaching your children how we can love someone in spite of.

It’s a pretty common phenomenon, and it’s not in any way a new occurrence. Grandparents have been horrifying their adult kids — and their children — forever. There are a few theories as to why it’s so common.

They come from a more prejudiced era

Is Grandma somehow frozen in time? This is the most commonly promoted defense of elder prejudice, and it’s true that discriminatory attitudes are decreasing.

A talk with most any teenager will reveal, for instance, that skin color plays no more of a role in their attraction to others than does hair or eye color. In the TV shows they watch, it’s a non-issue, as it should be. What matters is who’s hot — hey, they are teens. For the overall population, the data looks almost as good, with 87% of Americans fine with black/white marriage. Given that acceptance has been rising since Gallup first asked the question in 1958, when only 4% approved, that figure’s likely to keep rising.

When it comes to same-sex marriage, a strong majority of Americans, 66%, now have no issue with it, according to PRRI. While this is just one gender-related subtopic, this statistic point at people being less close-minded than in the past.

But while it’s true that discriminatory attitudes were more common when our elders were young, they live in 2018, too, with the rest of us. If we continue to accrue wisdom as we age, childhood indoctrination as an excuse gets one only so far.

According to William von Hippel of the University of Queensland, the aging process degrades the flexibility and thus effectiveness of the prefrontal cortex. This is the area of the brain responsible for discarding irrelevant and inappropriate thoughts our creative brains may try out before they get too far, and certainly before they come out of our mouths. 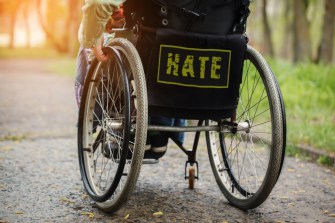 Some wonder if this means that these older people were always racist/homophobic/etc, and just gave up pretending not to be. von Hippel notes, however, that there’s another way to look at this: The thoughts our brain previously edited away were not necessarily discarded as inappropriate or relevant because society deemed them so, but because we did. Those inhibitions are the mechanisms by which we remain true to our convictions. When control of them slips away, we can no longer as effectively silence experimental random thoughts, leaving them to assume greater weight than they really merit.

Old age is not for the faint of heart

While the challenges of late life in no way excuse hateful comments, they may go some way toward explaining it.

Once one’s body begins to break down in earnest, an older person’s world gets smaller as there’s less that he or she can do, and a dark, inward journey can begin to take place. It’s often difficult or impossible to replace lifelong activities with new experiences that offset their loss, and so for many, life can become a depressing series of losses. Along with the frustration at the loss of abilities — and control — there may be physical pain, and since there’s not much mystery about where it’s all leading, there can be unceasing fear as well. The relentlessness of decline can be utterly exhausting on a body struggling to hold on. Asleep, awake, it’s a scary, solitary ride. 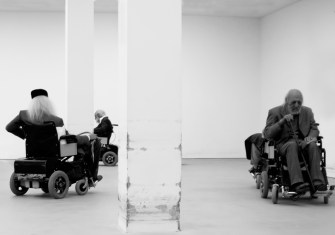 So for many, there’s frustration and resentment of a world that no longer applies. In that mindset, anyone can be an Other, and it becomes easier all the time to thoughtlessly cast hateful comments at them. The more different the targets are, the more cold and hateful the comments are likely to be. Couple this with the loss of control a less-competent pre-frontal cortex may inflict, and it’s easy to see what might be going on with Grandma.

Not everyone experiences old age the same way, and we can only hope that for each of us, there’s a satisfying victory lap to enjoy as our bodies one day wind down. Maybe the best hope is to practice not being judgmental, being at peace with life, and maintaining a community of people around us who we love and who love us in return to avoid one day finding ourselves trapped in isolation. And keep an eye on the science — maybe there are things we can do now to prevent our aging pre-frontal cortex from one day letting us down.

It is through speaking and listening that human beings become who they are.
Up Next
Surprising Science

Researchers study wolves in the area contaminated by the Chernobyl nuclear disaster and what happens when they leave.