In a print piece in Forbes, George Anders showers laud upon Slack Technologies, the company behind today’s hottest team-based messaging software. This isn’t just because Slack is a bitchin’ “unicorn” startup, or simply due to the virtues of its product, but because Anders is impressed by the breadth of the company’s creativity — something that extends beyond its programmers.

For Anders, it’s the fact that much of Slack’s braintrust aren’t tech folks — they’re liberal arts people. Co-founder and CEO Stewart Butterfield, who is a real person and not one of Bertie Wooster’s Drone’s Club pals, studied philosophy and history of science for his bachelor’s and master’s degrees. His is a tech startup garnished with a philosopher’s touch.

Anders writes that Slack and other big tech companies offer new hope to those saddled with liberal arts degrees that have so far been worth about as much as the paper they’re printed on, if not less. After all, that’s the nice paper you have to head to the back of OfficeMax to find. Anyone who’s ever printed a thesis or dissertation knows that stuff ain’t cheap.

But I digress. Here’s Anders’ take:

“Throughout the major U.S. tech hubs, whether Silicon Valley or Seattle, Boston or Austin, Tex., software companies are discovering that liberal arts thinking makes them stronger. Engineers may still command the biggest salaries, but at disruptive juggernauts such as Facebook and Uber, the war for talent has moved to nontechnical jobs, particularly sales and marketing. The more that audacious coders dream of changing the world, the more they need to fill their companies with social alchemists who can connect with customers — and make progress seem pleasant.” 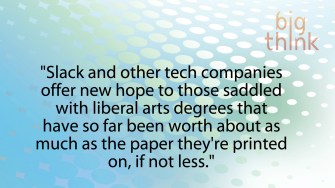 The piece goes on to explore how liberal arts graduates have benefited from the recent tech boom and why we shouldn’t just bank on a full pivot to STEM. Instead, Anders argues we should refocus on STEAM, which inserts “arts” between “engineering” and “mathematics.” Look at Slack, he says. A philosopher calls the shots. Communications and drama majors following suit. Over at Facebook, there are more openings now for sales and business jobs than software development. The market is shifting toward savvy liberal arts and business folks armed with creativity and critical-thinking skills.

If you’ve got 15 to 20 minutes to kill, go ahead and read Anders’ full piece linked again below. It’s a sharp, well-researched glimpse at the current and future jobs market for educated millennials fearing for their careers. One notable piece of information Anders doesn’t touch on: Not every liberal arts degree is created equal. Just as it’s always been, an English degree from Yale or Northwestern is going to trump one from Palookaville College. If your liberal arts degree is stamped with a pedigree, opportunities for advancement are blossoming. If not, there’s still hope, but be ready for the same competition there’s always been. Make friends with the right people, snag an internship, and demonstrate why you’re more than just the fancy-ass piece of paper with your name on it.

Below, CNN‘s Fareed Zakaria defends the liberal arts degree with a brief history lesson and a plea to get STEM and the humanities back together:

Scientists ranked countries on their end-of-life care. The U.S. fared poorly.
Up Next
Technology & Innovation

Trained Rats in Cambodia Use Their Noses to Clear Minefields

The rats, which are trained to sniff out TNT, are among the most efficient tools available to Cambodians trying to rid their country of over 4 million landmines left over from the Khmer Rouge.