Maslow’s hierarchy of needs has been a popular model of human development for decades now. The now-famous pyramid of increasingly sophisticated needs and desires, culminating in self-actualization, and then self-transcendence, has taken root in our collective minds, dominating wellness blogs, business seminars, and self-improvement books.

But the hierarchy of needs is just one way to think of human development. This said, relatively few people have heard of Kazimierz Dąbrowski’s competing theory of positive disintegration. What’s the difference between the two, and what are their respective merits? 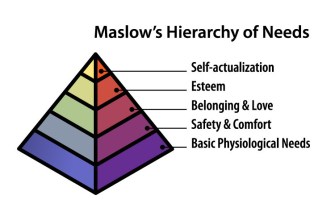 The theory of positive disintegration

One simple way to characterize the difference between the two models is that Maslow focused more on the carrot, and Dąbrowski focused more on the stick. In Maslow’s hierarchy of needs, people are driven to satisfy the need of whichever level they find themselves on the pyramid: the need to eat, the need to feel loved, the need to realize their full potential, and so on. Dąbrowski, on the other hand, believed that personal crises, anxieties, and psychological tension are necessary for an individual to transform themselves and develop.

Before we can dive into Dąbrowski’s model, understanding more about Dąbrowski’s life may be helpful. His life was one of constant turmoil and crises, largely because he grew up in Poland during the span between the two World Wars. Dąbrowski was jailed by both the Nazis and the Communists, and, as a member of both the intelligentsia and psychiatry in general, he was at significant risk under the Nazi regime. Dąbrowski hid his mentally ill patients, working underground in order to spare them from the Nazis purification programs. He was active in the resistance effort, and during his imprisonment, Dąbrowski was subjected to torture and starvation. As such, crisis, conflict, and suffering came to inform a great deal of his work.

His model of human development can be divided into five levels. The first level, called primary integration, is where he believed the majority of humanity resided. Here, human beings are guided by two factors: instinct and social conventions. Those who rely primarily on instinct and biological imperatives often act selfishly, advancing their own interests over those of others. Dąbrowski argued that many criminals and psychopaths operate at this level. The rest of humanity operates according to social conventions, accepting social mores without critically examining them. In a benevolent society, this mindset doesn’t cause any real harm; the moral code the society provides may indeed be moral. However, in a less enlightened society, the majority of people will follow convention and commit heinous acts if it is expected of them. As an example, consider the number of Nazi soldiers who were “just following orders.” People at this first level feel that all their behavior is good and correct, and so they do not experience much internal turmoil.

But this can be interrupted by a crisis, launching an individual into the second level: unilateral disintegration. Moments of major change, such as adolescence, can bring this about. At this moment, an individual is faced with irreconcilable choices that apparently conflict with the social conventions or biological impulses that guided their behavior during the first level. Many people reach this stage, tinctured by psychological turmoil, only to fall back to the first level.

The third level is called multilevel disintegration. Here, rather than simply conflicting with the norms that an individual was raised with, the individual begins to see a higher, better alternative. They can see an ideal and recognize that their own behavior falls short of it. As a result, they begin to scrutinize and reconstruct themselves to get closer to that higher, more ideal way of being. Again, people can fall back to previous levels here.

At the fourth level, called directed multilevel disintegration, the individual isn’t just responding to crises — they’re actively rooting out how their behavior conflicts with their higher ideal. Each “default” view they had of life is examined, and if it meets their newly developing standards, the perspective or behavior is retained. If it doesn’t, the individual reshapes that perspective or behavior to better match the way they think it should be.

Finally, we get to the cherry on top, the equivalent of Maslow’s self-actualization: secondary integration. Here, a person’s values and identity are the result of deliberate, conscious choice. They’ve looked at who they want to be and how that contrasts with what their society wanted them to be or how their instincts told them to act and have established a comprehensive system of morals. Just as there is little internal conflict at level 1, so too is there little internal conflict at level 5. Only this lack of turmoil happens for very different reasons — rather than failing to acknowledge the possibility of any higher standard than what society presents, an individual who has undergone secondary integration has established a moral code that tells them unequivocally how to behave.

Dąbrowski didn’t think that everyone had the potential to reach secondary integration. He argued that some people had more “developmental potential” than others. This concept has three parts to it: First, individuals with high overexcitability have more developmental potential. Dąbrowski described this as a greater sensitivity to life, a heightened experience of stimuli, and a “tragic gift.” The more overexcitable somebody is, the more likely they are to experience crises and suffering, but these crises are necessary for growth. Then, there’s talents and skills, whose contribution to personal growth is fairly self-evident. Finally, there’s a third factor: the innate, autonomous drive to growth that some people exhibit. Many are content with where and who they are, while others seem driven to advance.

We can see that there are some pretty major differences between Dąbrowski and Maslow. They were friends and colleagues, but each had a very different approach to thinking about human development. One major difference is that Maslow’s hierarchy of needs doesn’t, in modern usage, focus on transformation so much. Somebody who has achieved self-actualization has realized their whole self, including those lower modes of thinking and behaving that Dąbrowski described at level 1 of his model. In contrast, the theory of positive disintegration requires some things to disintegrate before somebody can truly realize their potential.

Maslow’s model also implies that people are naturally inclined toward self-actualization. As each lower need is met, people are motivated to pursue the next level of the pyramid. Once you have food and water, then you’ll look for shelter and safety. Once you’re safe, then you’ll look for belonging and love. Once you have these, you’ll build your self-esteem. Once you’ve done that, you can become self-actualized. But Dąbrowski thinks that most people don’t feel the need to become their idealized self. Most people are content to go with the flow and follow the status quo.

So which model is right? It’s hard to say. Both are just formalizations of the very complicated matter of human experience. Perhaps we can’t boil down interior transformation into levels and pyramids. These models might not be able to serve as roadmaps to enlightenment, but they can help us look at ourselves through different lenses and — hopefully — become better human beings in the process.

“I need to think about the future. Will you help me?”
Neuropsych

The language you speak plays an important role in how you evaluate truth.
Up Next
The Present

Elephants are now being hunted for their skin, being turned into ‘ruby’-like jewelry

With the ivory trade on the decline, poachers have been capitalizing on a new, disturbing trend.