One could be forgiven for thinking that the term “self-actualization” was developed entirely by Abraham Maslow. Today, there are very few contexts where one can hear the term outside of Maslow’s famous hierarchy of needs. But in fact, the twentieth century featured many humanistic psychologists who used the term to mean one thing or another. It was first coined by psychologist Kurt Goldstein, who used it to refer to something very similar to what Maslow would later focus on: the tendency for human beings to become all that they can, that “what a man can be, he must be.” 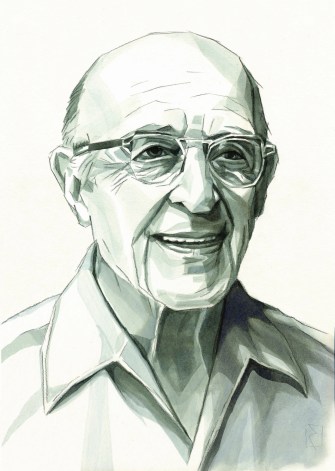 A sketch of Carl Rogers.

Rogers’ theory of personality and behavior

Along with Maslow, Rogers was one of the pioneers of humanistic psychology. Specifically, Rogers’ greatest contribution was to the practice of psychotherapy, particularly in the development of what’s known as “person-centered therapy,” which is thought of today as one of the major approaches to therapy, along with cognitive behavioral therapy, psychoanalysis, and so on.

At the core of this therapeutic approach was Rogers’ theory of personality and behavior. Just as Maslow had his hierarchy of needs, with self-actualization at the top, Rogers had his own model of human development, although self-actualization played a very different role in Rogers’ system. Rogers actually had 19 separate propositional statements upon which he built his theory, but we’ll just summarize the major components.

In Rogers’ theory, reality for an individual (which he refers to as an organism) is the sum of subjective perceptions that the organism experiences. A developing organism will take some of these perceptions and separate them, labeling them as the self. As an example, you might perceive your body and a box of paperclips on your desk, but you would only consider your perception of your body to fall under the designation of “self.” This happens with concepts and beliefs, too. Some of these things become part of the self, while others are perceived as belonging to the environment.

This idea of what counts as the self and what doesn’t isn’t fixed; it’s fluid. Different concepts, perceptions, and experiences occur as a result of interacting with the environment, and the organism has to sort out how to relate their identity to these experiences.

Naturally, this isn’t a smooth process. As a result of these interactions, most of us invent an “ideal” self, the person we think we should be, rather than the person we actually are. In Rogers’ system, the broader the gap between the real self and the ideal self, the greater the sense of incongruence. All sorts of behaviors and experiences might occur that seem unacceptable to who we think we are. If this incongruence is severe enough, the organism might develop a psychopathology. If, on the other hand, the person we actually are and the person we think we should be are congruent with one another, we become more open to experiences and have to do less work defending ourselves from the outside world.

Where does self-actualization fit into all of this?

Where Maslow had self-actualization at the very top of a hierarchy of motivations, Rogers argued that self-actualization was the only motivation and that it was constantly driving the organism forward. “The organism has one basic tendency and striving — to actualize, maintain, and enhance the experiencing organism,” wrote Rogers. For Rogers, every behavior and motivation is directed in pursuit of actualization, of this constant negotiation between the self and the perceptual field that composes an individual’s reality.

In order to live the good life, an organism must symbolically assimilate all experiences into a consistent relationship with the self. To be fair, that’s not an exactly intuitive definition. Consider, for instance, a narcissist hearing criticism. The narcissist perceives themselves to be perfect, and criticism is a threat that cannot be assimilated into their concept of their perfect self. Somebody living the “good life,” however, might take that criticism as potentially true — potentially false, too, but worth considering at the very least.

Seems like a pretty good life, all in all. But Rogers also warned that not everybody is ready for the good life. He wrote,

“This process of the good life is not, I am convinced, a life for the faint-hearted. It involves the stretching and growing of becoming more and more of one’s potentialities. It involves the courage to be. It means launching oneself fully into the stream of life.”

On Becoming a Person: A Therapist’s View of Psychotherapy

“Downward counterfactual thinking” — that is, imagining how things could be worse — is a quick and easy way to boost your well-being and gratitude.
Up Next
Neuropsych

How do 80-year-old ‘super-agers’ have the brains of 20-somethings?

Most elderly individuals’ brains degrade over time, but some match — or even outperform — younger individuals on cognitive tests.