For hundreds of years, the biggest threat to the largest land mammals on Earth, elephants, was the ivory trade. As demand for their tusks increased in modern times, the industry became a major — not to mention unsustainable — threat to their wild populations. Between 1979 and 1989, for instance, demand for ivory cut the African elephant population down from 1.3 million to 600,000.

The ivory trade took a serious blow in 1989, though, when the Convention on International Trade in Endangered Species (CITES) banned international trade in African elephant ivory, a move that followed up the 1975 ban on trading Asian elephant ivory. Poaching continued to be an issue, particularly since there was still considerable demand in the Chinese market, where ivory was used in medicine and ornaments. But, in 2018, there was another bit of good news: China banned the trade of all ivory and ivory products.

Birth of Sumatran elephant in Aceh

Out of the frying pan and into the fire

This was certainly a victory for conservationists, but it seems that elephants can’t catch a break. Starting around 2014, Asian elephants have been poached for their skin.

A 2018 report from Elephant Family, a U.K.-based non-profit, found that the main market for elephant skin was located in China, where it is primarily used for two purposes: It’s ground down into a powder for use in traditional medicinal products, and it’s shaped in polished beads for bracelets and necklaces. Belinda Stewart-Cox, the director of conservation at the non-profit Elephant Conservation Network, explains:

“If you look at [the beads], you think they look like garnets, rubies or some kind of red stone. But those subcutaneous layers [in the skin] include a lot of blood vessels, so there’s a lot of blood in that. Those beads look ruby red because they contain blood.” 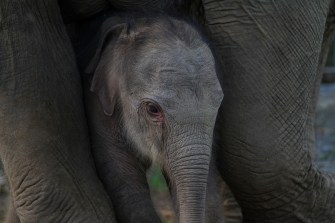 In many ways, this trade is even more destructive than the ivory trade. First, it primarily targets Asian elephants, which were already more at risk than African elephants. Today, there are only about 50,000 wild Asian elephants left. In addition, ivory poaching could only target elephants who could grow tusks — among Asian elephants, adult males only grow tusks roughly 25 percent of the time — but skin poaching is indiscriminate.

Aside from the innate tragedy of losing one of Earth’s largest land mammals, it would be an ecological disaster if the Asian elephant were to go extinct. Asian elephants are sometimes referred to as the “gardeners of the forest,” as they eat plants that would otherwise grow wild, they create paths through the forest for other animals to move through and for new plant life to grow in, and they distribute seeds through their dung, which also has the added benefit of fertilizing the soil and providing homes and nutrients for a variety of insect species.

Unfortunately, it is not easy for elephants to recover from a major blow to their population. As a large species, elephants do not have many offspring, and the gestational period for one elephant is around 22 months. And while ivory poaching mainly targeted the males, now female elephants are also viable targets for poachers, further hampering these animals’ ability to bounce back.

Asian elephants are listed in Appendix I of CITES, meaning that all products derived from these elephants is prohibited except for non-commercial purposes, like scientific research. Despite this, however, China’s State Forestry Administration is issuing licenses for the manufacture and sale of pharmaceutical products containing elephant skin.

However, China’s ban on the ivory trade indicates that similar regulation can be implemented and work in the future. After significant public support, notably including Chinese basketball star Yao Ming, China implemented its ban on the ivory trade at the start of 2018. A survey of Chinese individuals indicated that after the ban came into effect, 72 percent of Chinese respondents would not buy ivory, compared to 50 percent when the poll was conducted the year prior, before the ban was applied.

A number of non-profits are working to raise awareness of this issue and to bring it to the attention of international bodies, such as CITES. Elephant Family, for example, presented its 2018 report to CITES, gaining approval from the European Union and the U.S. for amendments, such as requiring investigations into illegal trade and implementation reporting. The World Wildlife Fund, too, is equipping and training rangers to stop poaching in Myanmar, where this crisis is particularly dire. With any luck and with greater public awareness and engagement, we can drive poaching, rather than elephants, to extinction.

To preserve biodiversity and ecosystems, protected areas should be connected into a gigantic World Park.
The Present

A program in Brazil both helped and harmed. What can we learn from it?
Up Next
The Present