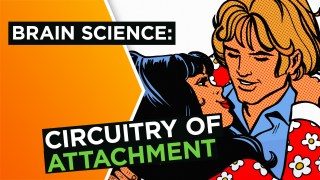 What areas of the brain are activated when you feel a cosmic connection with someone?
▸
3 min
—
with
Helen Fisher

So we've really stumbled on not only the brain circuitry of attachment but how it emerges in a relationship. We put 17 people into the brain scanner who had just fallen happily in love. They were madly in love, all of them. And some of them had fallen in love as little as three weeks ago and some of them had fallen in love as much as 17 months ago. And we found the same intense feelings of romantic love, the whole dopamine system lit up and became active giving you that focus and the motivation and the energy of intense romantic love. But we then compared people who had been in love between one month and eight months with those who were in love, madly in love between eight months and 17 months. And what we found in those who were in love a longer period of time is new activity in brain regions linked with attachment. So basically when you fall madly in love with somebody unless you were deeply attached to them before you ever fell in love with them, but let's say you don't know them very well, you fell madly in love with them. That brain system can be triggered instantly. But the feelings of attachment grow. They grow as you learn about this person. We're constantly learning about our partner.

And as you learn more about their sense of humor, their kindness, their sexual ability, their interest in children and babies, their patience with your mother or father or family, et cetera, this attachment system grows. It grows in the brain giving you greater and greater feelings of deep attachment to somebody. You know I had a wonderful girlfriend who had a 60 year marriage and she once said to me, she said, you know Helen, sometimes I hate him but I always love him. And what she was saying is that attachment system sustains itself in a good relationship even through difficult times. It's a very strong sticky substance attachment.

Hiring hack: How to better evaluate your candidates