Worried that the pandemic is ruining kids? That they’re falling behind? Falling apart?

The good news is, there is good news. A whole lot of kids are not only adjusting to this very weird new world, they are even—I know this sounds strange—flourishing. Or maybe the word is “recovering” from their super-busy, no-time-to-breathe lives up till now.

I run Let Grow, a nonprofit promoting independence as a critical part of childhood. The kind of childhood you might remember—or at least saw on “Stranger Things,” with kids riding their bikes, and staying out till the streetlights came on—had very nearly evaporated. Today’s kids spend most of their waking hours in activities run by adults: school, sports, extracurriculars, homework, and the dreaded reading log.

What happens when that highly structured life suddenly goes out the window? Here’s one account from a girl named Sable, age 12. She writes:

Anxiety has always been a part of my life, so when I heard school was closing due to the coronavirus, I was very scared. See, my mom still had to go to work each day, so I was left home alone with my two dogs. During the ﬁrst week, I would email my mom every five minutes and get furious when she didn’t answer right away—scared that something had happened, when in reality it was all ﬁne. But after the first week, I realized that this wasn’t so bad!

I was more independent and I loved it. Being independent is like getting a power-up in a video game or winning a prize at the claw machine. You’re getting a boost of conﬁdence. I made my own rules and had to decide between right and wrong choices, such as, ‘Should I have a healthy option for lunch, or a bowl of ice cream?’ (Sometimes I picked ice cream, but you get my point.) I got so into preparing meals that I started to make lunch for my mom and homemade treats for my dogs…

Geez Louise! The girl is sunny as a daffodil. So is she some kind of opposite kid—when everyone else gets scared, she gets brave?

Actually, no. She’s blossoming because at last she’s discovering her strength. And she is not the only one.

Sable entered Let Grow’s “Independence Challenge” essay contest (entries now closed). We asked kids what new things they started doing since school closed, and their answers proved exactly what we’ve believed all along: Kids are insanely resourceful! This was just hard to see, back when everything was going “right.”

Being independent is like getting a power-up in a video game or winning a prize at the claw machine. You’re getting a boost of conﬁdence.
— Sable, age 12

Pre-pandemic, the culture had stopped believing kids could do anything safely or successfully on their own. Not only were kids incredibly overscheduled, they were also overprotected. Adults were driving them everywhere, arranging their playdates, intervening if the kids got a B, or a bruise.

As a result, I’ve met middle schoolers who’d never been allowed to walk the dog, or ride their bike to a friend’s house. Middle schoolers who’d never used a sharp knife. They’d been helped so much, it was actually hurting them. A 2018 Pew study found 70% of adolescents said anxiety and depression were big problems among their peers. Makes sense. Being treated like a baby when you’re not a baby is depressing.

And then, suddenly—WHAM! Time to step up to the plate, thanks to a bio-catastrophe.

Sure, the adults are still around, sometimes 24/7 now. But they’re distracted. And besides, they can’t possibly fill all those hours that used to be filled with school and all the after-school stuff. So, for the first time in their lives, a whole lot of kids are finally getting to see just how much they can handle on their own. (Click here for a free Let Grow Independence Kit with ideas for kids.)

One essay came from a 14-year-old who owned two guitars, but only started learning to play now that school was out. One eight-year-old girl gleefully admitted she’d ridden her bike further than she was supposed to. A seven-year-old scared of the stove started making eggs (and now thinks he should have his own cooking show). The stories go on and on, and you can read them below—just keep scrolling. Stories of kids liberated from a hovering culture that had accidentally been keeping them down.

Not that every single child is suddenly bursting with creativity and confidence. If only! But the pandemic is giving kids back some free time and some responsibility—the sunshine and spring rain of child development. 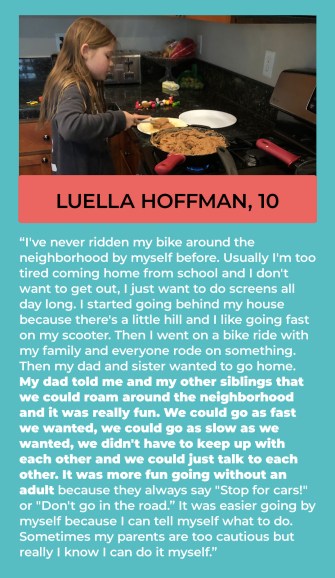 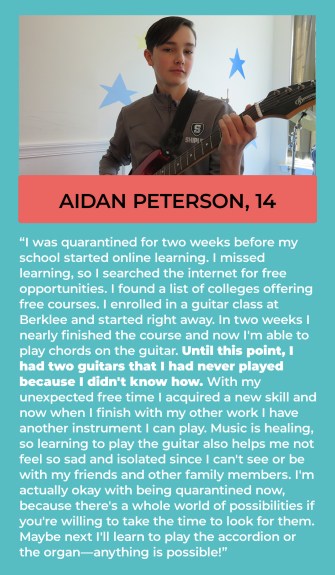 Tags
childreneducationfamilylearningparentingpersonal growth
In this article
childreneducationfamilylearningparentingpersonal growth
Related
The Future
How the metaverse will revolutionize K-12 and higher education
Imagine going on a tour through the human circulatory system as a tiny cell. That is just one example of education in the metaverse.
The Learning Curve
The art of asking the right questions
The right questions are those sparked from the joy of discovery.
Thinking
How the liberal arts can save higher education
Computerized, job-focused learning undercuts the true value of higher education. Liberal arts should be our model for the future.
Thinking
Boys are graded more harshly than girls. Why?
Education has a global bias against boys.
Neuropsych
How do lie detectors work?
Experts explain how lie detectors work, what happens in the brain when we tell lies and how accurate polygraph tests are.
Up Next
Hard Science
Top-secret U.S. space plane about to leave Earth for years
The Space Force will soon launch its X-37B spacecraft on a classified mission.