Researchers at Ball State University and Michigan State University have found that mindfulness practices, including but not limited to mindfulness meditation, may lead to the human brain’s transcendence of previously established associations that lead to racial biases.

Like other cognitive biases, racial biases typically lie beyond our conscious attention, informing our conscious thoughts and decisions in ways that science does not fully understand.

Famed psychiatrist and psychoanalyst Carl Jung once wrote that “[t]he psyche is still a foreign, almost unexplored country of which we have only indirect knowledge; it is mediated by conscious functions that are subject to almost endless possibilities of deception.”

Historical factors have contributed to racial biases. In the book “Sapiens: A Brief History of Humankind,” author Yuval Noah Harari discusses the origins of anti-Black racism as it presently exists in North America.

Because African slaves were resilient to the diseases that wiped out many of the indigenous slaves before them in North America and South America, Harari theorizes that “genetic superiority (in terms of immunity) translated into social inferiority: precisely because Africans were fitter in tropical climates than Europeans, they ended up as the slaves of European masters! Due to these circumstantial factors, the burgeoning new societies of America were to be divided into a ruling caste of white Europeans and a subjugated caste of black Africans.”

An evolutionary adaptation that once kept my ancestors alive may have ironically contributed to the suffering and death of millions of people around the world.

Racial biases, racism, and systemic racism are interrelated and have been essential conversation topics globally, throughout 2020 and 2021.

Such topics have been incredibly polarizing in the United States, given the residual effects of the trans-Atlantic slave trade and the shocking death of George Floyd in May 2020 due to former police officer Derek Chauvin kneeling on Floyd’s neck for nine minutes and 30 seconds.

The racism at the center of Floyd’s highly publicized death and the deaths of many other Black people throughout the last two centuries has led to outrage across the globe, culminating in the largest civil rights movement in human history last summer.

In Toronto, Canada, this past summer, the Toronto Board of Health voted unanimously in June of 2020 to declare anti-Black racism a public health crisis.

Gun violence has been on the rise in Toronto for the last five years. Police violence is a significant problem in Canada’s largest city, often involving young Black men and other minority groups.

As police violence relates to Black people, less than 9 percent of Toronto’s population is Black, and yet, Black people are significantly more likely than other ethnic groups to be arrested, charged, and killed by Toronto police, according to a 2018 Ontario Human Rights Commission report.

The same report states that between 2013 and 2017, a Black person in Toronto was nearly 20 times more likely than a white person to be involved in a fatal shooting by the Toronto Police Service. 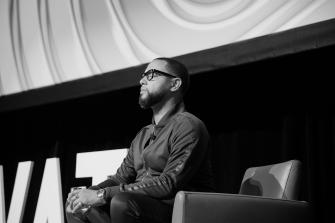 Such statistics are troubling to me for many reasons, including the fact that I am the art director for Operation Prefrontal Cortex, a Toronto-based program harnessing the power of mindfulness and meditation to help reduce incidences of gun, mass, and police violence in Toronto.

Operation Prefrontal Cortex was co-founded by Julien Christian Lutz, professionally known as Director X, and his longtime friend Danell Adams, after Lutz became a victim of gun violence in Toronto.

Lutz is known for directing high-budget, visually distinctive videos for famous artists, including but not limited to Drake, Kendrick Lamar, Rihanna, Jay-Z, and Kanye West.

When I spoke to Lutz about what Operation Prefrontal Cortex is doing to prevent incidents like George Floyd’s death, he said that “we’re talking to police about it, really implementing mindfulness. And then spreading a message of what mindfulness and meditation can do for everybody.

“We also need to see the research. From what I’ve seen, meditation does help reduce racial bias. So, we need to do the proper science and test it and test it again to see if these results are consistent, and if they are, well then again, it feeds right back into what we’re talking about.”

I also spoke to him about the hopelessness that numerous BIPOC youth experience, especially in low-income communities in Toronto and elsewhere, due to receiving the short end of the stick that is systemic racism.

To Lutz, “it’s an impossibility to reach some kind of meaningful existence someplace where you can achieve goals and be happy if you can’t see that in your world. Then you become self-destructive. And you lash outwards.”

Frequent solidarity marches throughout 2020 on behalf of Black people and other marginalized groups were a by-product of many forces, including but not limited to hundreds of years of oppression, the stressors associated with the COVID-19 pandemic, and the global mental health epidemic. These marches illuminated the quiet and overt suffering of millions of people, and the ruthless violence that can grow from the seeds of racial biases.

All human beings, regardless of socio-economic status or intellectual prowess, can experience and perpetuate racial biases. The unconscious nature of biases causes them to be elusive, which is a phenomenon that American writer and filmmaker Ben Hecht once eloquently described in the following way, through his “Guide For The Bedevilled”: “Prejudice is our method of transferring our own sickness to others. It is our ruse for disliking others rather than ourselves. We find absolution in our prejudices. We find also in them an enemy made to order rather than inimical forces out of our control.”

Mindfulness is non-judgmental awareness of the present moment. Since racial biases are essentially judgments, mindfulness may be a tool that can lead the human brain to transcend such judgments, both consciously and unconsciously.

There is conflicting evidence of whether [racial bias training] actually does any good or potentially makes people defensive and reactive, and potentially do bad things in response. Doing a program like mindfulness, which has a myriad of benefits, can be better and make people less reactive.

Participants in the study listened to either a mindfulness or control audio. They then completed Implicit Association Tests (IATs), which are commonly used by researchers to measure the strength of associations between concepts like race and evaluations like “good” or “bad.”

Lueke and Gibson’s research showed that mindfulness meditation led to a decrease in implicit age and race bias.

I spoke to Lueke about his research, and he had this to say: “I think it’s really interesting and potentially very valuable that mindfulness has been shown to help de-automatize our engagement with the environment, which can help us interact with people in a much more objective way, rather than allowing our previous histories or experiences or bugaboos of whatever, change or alter the way that we interact with new people that we don’t know anything about, and we shouldn’t necessarily make assumptions about.”

Lueke explained that mandatory and optional racial bias training within organizations often results in resistance from those that have strong racial biases.

“There is conflicting evidence of whether [racial bias training] actually does any good or potentially makes people defensive and reactive, and potentially do bad things in response. Doing a program like mindfulness, which has a myriad of benefits, can be better and make people less reactive.” 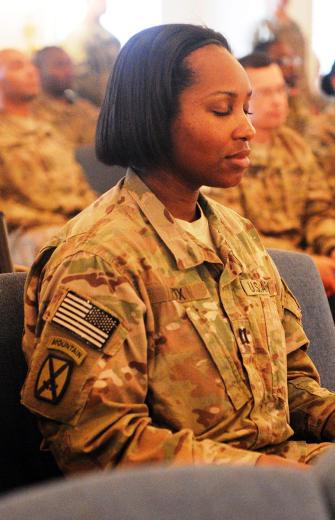 In Gibson and Lueke’s research, the participants were 72 white college students from a midwestern university town, 71% of whom were female. Would the study differ with a more diverse group of participants?

According to Lueke, most people tend to view their group members more positively than those outside of their in-group. So, positive associations will need to be considered in future studies with diverse participants.

“If we were to get a more diverse group of people, we would probably have to switch the measures a bit in order to most accurately figure out whether mindfulness was doing anything on an unconscious or automaticity type of level.”

When I asked Lueke about his thoughts on racial biases in general, he had this to say: “It’s shortcut thinking, to just automatically label somebody. And pretty much all human beings do it; it’s a way of attempting to predict your environment without a lot of information. So if you don’t have a lot of information, your brain will attempt to label that individual in order to try to get as much information as possible about them.”

“The problem with that is, oftentimes, those inferences can be incorrect and wrong. So it does take those extra resources to disengage from all of those automatic types of evaluations and try to actually do the work to interact with that person and get to know them a little bit better.”

Because I wanted to understand how research like Leuke and Gibson’s could be enhanced from another researcher’s perspective, I spoke to Benjamin Diplock, a Clinical Developmental Psychology Ph.D. Student at York University in Toronto.

Diplock believes that using psychometrically validated measures could be beneficial. “Individuals evaluating psychological measurement (psychometrics) consider the reliability of the respondents’ answers when they are filling out a questionnaire.”

He also recommended using an MRI and other machines to evaluate biological response markers. For example, “are there particular areas of the brain that light up or that are activated, based off of self-reported feelings of fear related to a Black person?”

The present-moment awareness that stems from mindfulness practices may be the cost-effective tool that humanity needs to access the present while significantly reducing the proliferation of systemic racism and race-based violence throughout communities, organizations, and nations.

More research on the topic is needed, as such research can potentially save some of the most marginalized people’s lives on a global scale.

Talking to yourself seems to yield real benefits, from boosts in cognitive performance to improved emotional regulation.
Neuropsych

Short-hop regional flights could be running on batteries in a few years.
Up Next
Life

Scientists discover slug that can decapitate itself, grow new body

The bizarre discovery could pave the way for advances in regenerative medicine for humans.