After decades of practicing Buddhism, Ronald Purser began noticing something was off. A professor of management at San Francisco State University, he noticed that the mindfulness movement—especially under the guidance of Jon Kabat-Zinn—extracted one of the eight major Buddhist practices and adapted it to suit the modern American lifestyle.

There are two problems with this. First, detaching one aspect of Buddhism and treating it as a standalone misses the broader context of the discipline. By comparison, as we discuss during our conversation, many people have taken one limb of yoga, asanas (or postures), completely ignoring that the moral and ethical limbs come first. You might become more flexible but you’re missing the bigger picture.

More problematic, however, is how mindfulness has become a potent force for turning responsibility back onto consumers and workers, the major issue discussed in Purser’s new book, McMindfulness: How Mindfulness Became the New Capitalist Spirituality. The following paragraph from chapter one is a great summation of the book:

“Reducing suffering is a noble aim and it should be encouraged. But to do this effectively, teachers of mindfulness need to acknowledge that personal stress also has societal causes. By failing to address collective suffering, and systemic change that might remove it, they rob mindfulness of its real revolutionary potential, reducing it to something banal that keeps people focused on themselves.”

This intensive “self-healing” regimen of modern mindfulness (and yoga; and neo-Shamanism; and pretty much every book sold though the Amazon-Whole Foods pipeline) exacerbates the victim mentality instead of empowering individuals within a community to take social action. Corporations that install mindfulness programs aim to optimize workers in order to avoid ethical and moral practices. If there’s an issue, blame yourself, don’t blame the system. In McMindfulness, Purser says the system is what truly needs fixing. 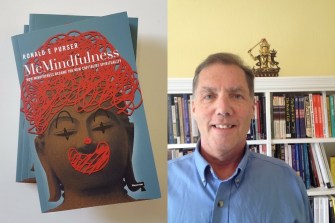 Derek: Over the years, I’ve covered say spiritual consumerism often. After reading your article I had to cover McMindfulness. You took the concept in a direction I never looked that deeply into, at least not to the depth that you have, which is how neoliberal policies affect mindfulness. I’ve long watched people move from yoga as a therapeutic modality or meditative device to a branding opportunity.

Ronald: That’s actually part of it too, isn’t it?

Derek: Yes, absolutely. You touch upon that, but you really home in on the political side in a way that I haven’t come across. You reference a Huffington Post article from 2013 that inspired the book.

Ronald: At the time, I was actually writing a longer academic article critiquing organizational mindfulness. My friend David Loy had written an open letter to Bill George, who was a visiting adjunct executive in residence professor at the Harvard Business School because he was promoting mindful leadership. He’s a former CEO of Medtronics, but he sat on executive boards of Goldman Sachs, Exxon Mobil, and Novartis.

David Loy wrote an open letter to him saying, “You’re a big promoter of mindful leadership. How does that affect your interactions with the board members at these companies that don’t have very good ethical and corporate socially responsible track records?” Bill George never responded despite numerous attempts.

David sent me that letter. I had been a friend of David’s for a while. I’m a big fan of his work and he says, “Why don’t we team up and write something for the Huffington Post and make it really short and simple?” I took the lead and he edited here and there. That’s how it came about.

Derek: You really focus on Jon Kabat-Zinn. There are a lot of people in this community that are regularly open for criticism—Tony Robbins is a great example. Jon Kabat-Zinn is not someone I’ve come across a lot of criticism of, and you provide really great insights.

Ronald: He’s been dubbed the “father of mindfulness.” He’s the leading spokesperson for the mindfulness movement; his work led to the mainstreaming of mindfulness. He was at Davos, the World Economic Forum, and Wisdom 2.0; he’s also talked to the U.S Army to promote mindfulness. I could not not focus on him. He’s an extremely influential person. His definition of mindfulness—”paying attention on purpose in the present moment nonjudgmentally”—has become the gold standard in scientific research, which is right out of the Mindfulness-Based Stress Reduction (MBSR). 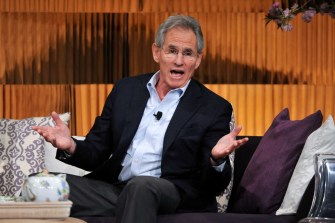 Derek: This is very personal for you, being a practicing Buddhist. How did that evolve?

Ronald: When I was around 27 years olds—I’m 63 now—I was an undergraduate at Sonoma State in Northern California. There was a Buddhist center in Berkeley. I had a few books by a Buddhist teacher on my shelf. I put two and two together and found out the center was fairly close to where I lived. I started taking courses, retreats, and workshops, at the Tibetan Nyingma Institute.

Before that, like most of us back in those days, we were reading Alan Watts, Robert Pirsig, and Yogananda’s book. But it wasn’t until I really got serious and started retreats. Then I went to graduate school in Cleveland. The only Buddhist center there was an ethnic Buddhist congregation for Japanese. The Japanese teacher had been a personal assistant to Shunryu Suzuki. I started to sit and learn from him and the Soto Zen tradition. Eventually I found my way back to San Francisco. I’ve continued my connections to the Tibetan Institute. I also recently went to through a Buddhist training program through the current Korean Taego order. My primary teacher is in Anaheim.

Derek: In your book, you point out that mindfulness is only one component of the eightfold path. What is the danger of extracting one piece and making it the center of the practice? You mention that mindfulness teachers discuss the Buddhist roots of mindfulness when it suits them, but deny it when it does not.

Ronald: This is a really rich, big question, isn’t it? You turn on the Buddhist on position when you’re talking to people in inner circles that are sympathetic, like at Wisdom 2.0. “We’re teaching the Dharma, we’re teaching the Dharma.” If you’re trying to bring it into public schools or get a federal grant, then of course it’s a Buddhist off position. That’s a rhetorical strategy Jon Kabat-Zinn started and it’s taken hold. It’s a mystification of mindfulness. When you look at mindfulness from the Theravada point of view, it’s very complex practice.

It’s not just mindfulness of breathing. There are all sorts of progressive things in terms of the four foundations. The word extraction implies almost a colonialist occupation of extracting resources for Western profits. You can recontextualize it in a way that becomes instrumentalized. It turns into a standalone technique or a tool that is disassociated from any kind of larger moral or social vision. That’s one danger.

The other is that it sends the message to the public that this is what mindfulness is. It’s just this one practice. They saw the utilitarian value of mindfulness. To make it widely accessible, they had to resort to these rhetorical strategies. They had to mystify it to cover up the fact that they’re selectively extracting and operating from its grounding in a religious tradition. There, you have morality, meditation, and wisdom, the three trainings. They took the middle sector and basically jettisoned the other two. That way it becomes psychologized, modernized, and then scientized. It’s joined into the discourse of therapeutic culture and self-help culture. It’s seen now as a quick-fix remedy for just about any anxiety or stress or middle-class concern. 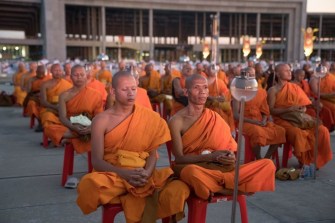 Monks seen meditating during the yearly Makha Bucha ceremony in the north of Bangkok.

Derek: I remember watching someone at Google leading a meditation. He said you can change your complete outlook on life “in just one breath.” With this Buddhist practice you write about, and in my industry with yoga, there is a real lack of understanding of the necessity of discipline.

Ronald: Right? It’s a longterm, lifelong path. It’s not a free meditation that you do on your app. It’s a lifelong path that is also done in community. If you look at most Buddhist centers, you’re not doing it strictly alone.

The other issue is that it has somehow flipped into focusing on hedonic happiness. “This will make me feel better, so I won’t have to look deeper or more critically at what’s going around around me. I can get a quick hit by doing this meditation.” It’s reinforcing consumer capitalism.

Derek: In yoga, there’s a term, santosha, which means “contentment.” In Buddhism, happiness was never the goal.

Ronald: That’s right. Barry Magid wrote a book, What’s Wrong with Mindfulness? He calls it a for-gain approach to mindfulness. In other words, mindfulness is now a utilitarian tool to achieve some particular aim that’s pre-established. In Zen, there’s a saying that “Zen is good for nothing.” It’s not an instrument that you do to achieve something. Mindfulness is now touted as good for everything or anything.

Derek: Your book is particularly insightful when you discuss how mindfulness is utilized by corporations to turn the onus of responsibility onto the workers.

Ronald: In chapter three, I talk about the privatization of stress and how the discourse of the narrative of stress has become the dominant narrative. That ties very strongly into the popularity of mindfulness because we want to believe it’s about stress reduction. That message is straight from Jon Kabat-Zinn. That’s the diagnosis of our cultural malaise: we’re constantly connected to our iPhones, laptops, devices, and so forth, so we have to be more resilient and adapt in order to stay sane within this digital pollution that we’re living in. Underneath that is a message that this is inevitable. It’s just the natural given that we have to deal with.

If it’s a natural given, then it places the burden and onus on the individual to figure out ways to compensate in order to stay healthy and resilient and competitive in the marketplace. It sounds like an empowering tool, but mindfulness advocates have not really critiqued this dominant view of stress, which presents stress as a lifestyle choice. It’s relegated to an individual lifestyle problem rather than seeing stress as a much broader phenomenon linked to social, political, and economic forces. The assumption is if we only evolve further biologically, which we haven’t, then when we encounter stress, the whole social and political world will be just fine.

I was talking to another journalist the other day and she told me that she took an eight-week MBSR course. She was very stressed out at work. During the course she wanted to bring up issues in her workplace. The instructor said, “Well, we’re really not here for that kind of discussion.”

Derek: What kind of discussion did they want to have?

Ronald: “Let’s just talk about our first-person experience while doing the exercises.” It’s often like what happened to psychiatry: we’re not listening to people’s real problems, just doling out pharmaceuticals. Now we’re doling out mindfulness interventions.

The modern attention economy hijacks our ability to focus, but an ancient technique offers a means to get it back.
Thinking

Jokes so cheesy even French philosophers will love them.
Neuropsych

Types of therapy are about as different as the people who use it.
High Culture

Here’s your gateway to enjoying the best of literature.
The Learning Curve

Your inner voice can be the devil on your shoulder or the angel. It depends on where your focus lies.
Up Next
The Present

There are many reasons the student debt crisis is what it is, a few of them can be traced back to good ol’ Uncle Joe.