Almost all of the baby food products tested in a new investigation contained traces of toxic heavy metals that can damage brain development in infants.

The investigation—which was commissioned by the nonprofit Healthy Babies Bright Futures (HBBF)—tested 168 baby foods manufactured in the U.S. for four toxic heavy metals: arsenic, lead, cadmium, and mercury. These metals, even in trace amounts, can “alter the developing brain and erode a child’s IQ,” according to the report. Of the foods tested, the results showed:

For at least a decade, health experts and advocacy groups have publicly raised concerns about the levels of toxic metals in baby food, and in 2017 the FDA established the Toxic Elements Working Group to reduce toxins in baby foods “to the greatest extent possible.” Because of efforts like these, toxin levels in baby foods have dropped significantly in recent years. But it’s not enough, according to the HBBF.

A call for “industry-wide change”

“Only a dramatically accelerated pace at FDA and the fruition of the new Baby Food Council’s pursuit of industry-wide change will be enough to finally solve the problem,” the report states.

“HBBF urges all baby food companies to establish a goal of no measurable amounts of cadmium, lead, mercury, and inorganic arsenic in baby and children’s food, in recognition of the absence of a known safe level of exposure, and to achieve steady progress toward that goal.”

But the baby food company Gerber noted that “many food safety and agricultural experts suggest that it is not feasible to achieve a ‘zero’ level of these elements — even in homemade foods made from organic ingredients.”

One problem is that these naturally occurring toxins will likely continue seeping into food, even if farmers and food manufacturers use the safest available practices. That’s because it’s a “legacy problem” caused largely by outdated pesticides that farmers had sprayed on the land for generations, as Charlotte Brody, a registered nurse and the national director of HBBF, told WebMD. Brody said one crop is particularly well suited for absorbing these dangerous toxins.

Health experts have known for years that rice contains high levels of arsenic, a toxin that’s repeatedly been linked to decreases in IQ. In the new investigation, more than half of the rice cereals tested contained inorganic arsenic (the most toxic form of arsenic) at levels exceeding the FDA’s proposed action level of 100 parts per billion (ppb). What’s more, the report also shows that rice also contains relatively high levels of lead, cadmium and mercury.

Still, even though most health experts agree that no amount of these heavy metals is safe for infants, it’s worth noting that toxin levels in baby foods have been falling for years. HBBF said the new findings shouldn’t necessarily inspire worry, but rather informed action.

“Many factors can influence a child’s IQ, from nutrition and genetics to environmental toxins,” the report stated. “And many sources ratchet up children’s exposures to heavy metals, from drinking water and old plastic toys to lead in dust from chipping paint and soil tracked into the house. Our findings raise concerns, but on the spectrum from worry to action, parents can choose to act. While no amount of heavy metals is considered safe, less is better.” 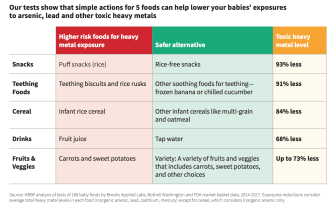 ​So, what can parents do?

The first human that isn’t an Earthling could be in our lifetime.
▸
5 min
—
with
Robert Curbeam
Up Next
Health

A harrowing new report by the CDC should serve as a wake-up call.