Every year from 2013 through 2017 the number of STD (sexually transmitted diseases) has gone up. 2017 was the worst of all, with 200,000 more cases than the previous year, according to new information published by the CDC. (2018 data has not yet been analyzed.) All three of the major STDs — gonorrhea, chlamydia, and syphilis — have experienced significant increases in the number of case reported.

While STDs and the more broadly defined STIs (sexually transmitted infections may not produce symptoms) are often considered little more than a distasteful inconvenience, untreated they can lead to serious health consequences. Perhaps the most tragic increase in recent years is a 22% increase in infant deaths from congenital syphilis that can be unknowingly passed to newborns from mothers unaware of their own infections.

According to Jonathan Mermin of the CDC, “We are sliding backward. It is evident the systems that identify, treat, and ultimately prevent STDs are strained to near-breaking point.” What is going on? 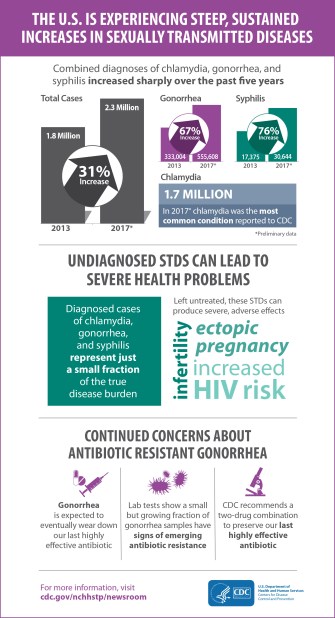 The statistics are sobering in the period from 2017 to 2018 alone. The CDC reports:

Gonorrhea, chlamydia, and syphilis, the most common sexually transmitted infections, can be cured with antibiotics (for now). Left untreated, the STDs can lead to transmission to other people, as well as “adverse health outcomes such as infertility, ectopic pregnancy, and increased HIV risk,” says the CDC.

And of course, there’s the congenital syphilis killing babies. Most states in the U.S. have reported cases, though 70% of them are concentrated in just five states: Texas, California, Florida, Arizona, and Louisiana.

The heartbreaking loss of newborn life is easily avoidable. Gail Bolan of the CDC says, “There are tools available to prevent every case of congenital syphilis. Testing is simple and can help women to protect their babies from syphilis — a preventable disease that can have irreversible consequences.”

There’s good reason not to put off getting an STD and STI checkup. Gonorrhea is one of the worrying bacteria becoming increasingly resistant to antibiotics, according to both the CDC and the World Health Organization, who report that it currently afflicts about 78 million people worldwide each year. According to the WHO’s Teodora Wi, “The bacteria that cause gonorrhea are particularly smart. Every time we use a new class of antibiotics to treat the infection, the bacteria evolve to resist them.” 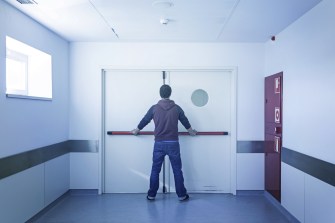 Why are STD rates on the rise

The subtext of the CDC’s third bullet point about local programs being cut is that there’s a compelling statistical intersection between the increase in drug use — particularly meth — and heterosexual syphilis. The CDC proposes new collaborations between STD control programs and substance-use disorder services providers — not cutting back such programs as seen recently.

Finally, the stigma attached to having an STD or STI is real, and many would simply prefer to assume they don’t have one. This is despite the estimate that among sexually active people, some 80% will have an STI (with STDs being a subset of these) at some point in their lives. Since many of these infections, especially STIs, present no symptoms, it’s easy to opt out of testing.

This is obviously a bad idea. It’s much smarter to get tested regularly and, if necessary, treated. Encourage your partners and friends to get tested — without making fun — and be forthcoming and honest if you have an infection. Use condoms religiously, and when your healthcare provider inquires about your activities, be honest.

A new study looks at what happens when you get infected with two viruses at the same time.
Up Next
Strange Maps

Most of it was eaten by Earth’s mantle, but scraped-off bits survive in the Alps and other mountain ranges.