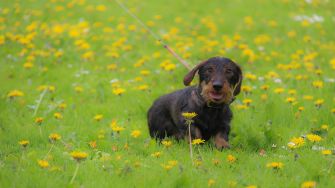 — That ‘new puppy smell’ is a real thing. The sweet smell (which some describe as smelling like chocolate or cinnamon) actually has to do with the puppy’s diet of its mother’s milk and the enzymes that break it down. It hasn’t been exposed to more complex dog food, so what you’re getting is an unsullied puppy digestive system.

— Puppies are born deaf, blind, and without teeth. The first week of a being a puppy, they sleep about 14 hours a day. Their encyclopedic sense of smell kicks in around week 3.

— The nose of each dog has a one-of-a-kind “fingerprint” (so to speak).

— Looking at pictures of young dogs really does help you focus. A 2012 Japanese study on cuteness found that viewing pictures of puppies before learning new information helped you pay much better attention than those that didn’t look at puppies. Older dogs didn’t seem to have much effect. 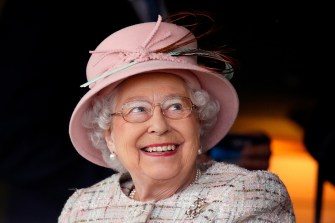 — While we’re on the England / Scotland tip, King Edward I of England built a giant catapult outside of Stirling Castle during a battle. It was called the Warwolf, and by some estimates was 300 to 400ft tall. The sight of this catapult (technically a trebuchet) being built caused the inhabitants of Stirling Castle to surrender, but Edward I wouldn’t accept the surrender until he got to try out the Warwolf.

— Abe is the only President to have ever been a licensed bartender. When he was 24 he opened a rations and goods store called the Berry-Lincoln Store with a friend named William Berry, in the town of New Salem, Illinois. The store ended up not doing so well, and Abe’s partner William Berry figured a good way to turn a profit would be to turn the establishment into a bar. Apparently, though, Abe didn’t like alcohol nor its effects and didn’t last long before quitting the job and moving on to get his law degree.

— Lincoln is the only president to be in the Wrestling Hall of Fame (Donald Trump is in the WWE Hall of Fame… for other reasons). He wrestled in 300 matches and apparently only lost once. During one match, according to one biography on Lincoln, he challenged the crowd to fight him by saying “I’m the big buck of this lick. If any of you want to try it, come on and whet your horns.”

— Lincoln created the Secret Service on the same day — just hours, actually — before he himself was assassinated, on April 14th, 1865. The original purpose of the Secret Service was actually to prevent counterfeiting and wasn’t used specifically to protect the President until 1901.

Related
Starts With A Bang
The sober truth about finding the Universe’s first stars
The Universe certainly formed stars, at one point, for the very first time. But we haven’t found them yet. Here’s what everyone should know.
Life
Our antidepressant drugs are affecting animals and ecosystems
A toxicologist explains the impacts of antidepressants on fish — and no, they’re not getting any happier.
The Past
Ancient migration: Bering Strait land bridge from Asia to North America was not a one-way road
Ancient humans crossed the Bering Strait land bridge from Asia into North America. But some of them went back.
Sponsored
Want to boost your happiness? Buy experiences, not material possessions
Some experiences continue to pay dividends time and time again.
High Culture
Did Paul Cézanne hide an early self-portrait underneath a 160-year-old still life?
To answer that question, we may have to figure out when the famed painter started to go bald.
Up Next
Technology & Innovation
Your own blood could become a mosquito’s worst enemy
Mosquitos kill about 725,000 people a year… making them the deadliest animal in the world. Our own blood could kill them, thanks to a new study of an old drug.