One of the more popular group fitness formats of late is treadmill running. At Equinox Fitness, where I teach a variety of classes in Los Angeles, a dozen treadmills are reserved for a few classes a week. An instructor leads the runners through intervals of jogs, sprints, climbs, and recovery. For many treadmill runners, who simply press start and take off, this varied workout is more physically and cognitively engaging.

Running can be monotonous if you cover the same terrain or punch in the same stationary workout every time you begin. Yet something transformational occurs during a run. The journalist Christopher McDougall writes that running “unites our two most primal impulses: fear and pleasure.” He also notes that the sensory neurons in our feet are the same as in our genitals. Our feet are constantly seeking pleasure, and running, he argues, is one means for providing it.

There are other ways running affects our nervous system. A 2016 brain imaging study, conducted by the University of Arizona’s David Raichlen, noticed important changes in the brains of serious runners. As running blogger (and runner) Ben Martynoga writes:

First, they saw increased co-ordinated activity in regions, mainly at the front of the brain, known to be involved in executive functions and working memory. This makes sense. Second, they saw relative damping down of activity in the “default mode network”, a series of linked brain regions that spring into action whenever we are idle or distracted.

The default mode network (DMN) is also the realm of our imagination, for better or worse. On the better side, running is a great activity to lose yourself in, to achieve the mythical “runner’s high.” Running provides flow states, in which the parts of your brain associated with identity and fear are tamped down. The boundaries of self and environment dissolve. Interestingly, the DMN is equally responsible for the not-so-good effects of the imagination. Martynoga notes that it is the culprit behind clinical depression. Letting your mind go doesn’t necessarily end positively.

Yet the rush of neurochemicals we want is associated with running. In fact, Martynoga writes that if Raichlen’s research holds up, we should consider running a form of “moving mindfulness meditation.” This isn’t really a new idea; Buddhists have a long tradition of walking meditation, focus and movement being essentially linked. Indeed, some of the most meditative movements of my life have occurred during trail runs. Raichlen is just giving the notion a scientific grounding.

Meditation, like running, engages executive functions in your brain while shushing the naysayer default mode. This might have provided an important evolutionary utility. In their book, Go Wild, John J Ratey and Richard Manning claim that we are a running species, not related to our ape ancestors but to more anatomically similar animals, like horses (specific to running gait, mind you). Persistence hunting was, for most of our history, a necessity. We’re not that quick, but we sure can endure, thanks to our well-placed lungs, the rotation of our hips, and bipedalism.

So it’s obvious that our brain would be affected by running. Popular terms such as “brain-body” and “mind-body” miss an essential point: our brain is, as Martynoga notes, just one of many organs. An important one, in many ways the gatekeeper of sensation and switchboard operator of movement, yet we cannot have spent two million years running through forests and across fields chasing down prey without creating a substantial link to our entire nervous system. As Ratey and Manning put it, “mental and physical agility run on the same track.” 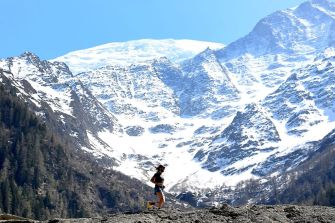 US ultra-trail runner Anton Krupicka runs during a trainning session on April 14, 2017 in Les Houches by the Mont Blanc mountain, in the Alps. (Photo by Jean-Pierre Clatot/AFP/Getty Images)

This connection between geographical extremes might, as paleoanthropologist Daniel Lieberman suggests, provide a basis for deductive logic. Our unique hunting skills involved complex social networking and cooperation. Our running ancestors had to predict where prey would migrate through clues, such as footprints, spoor, and scents. “The skill used to track an animal,” he continues, “may underlie the origins of scientific thinking.”

Endocannabinoids released during running are responsible for reductions in the perception of pain and anxiety, which might help explain the positive sensations felt during a runner’s high. Another study in Germany linked that euphoria with endorphin release. Or that might just be a consequence: perhaps it was the mixture of pleasure and fear involved in the chase that forced us to become faster and faster mammals. Martynoga goes so far as to say running can invoke ecstasy and invincibility, feelings that are being explained neurochemically by research.

While the focus of running studies usually involves physiology and biomechanics, Martynoga hopes that more studies will target mental health. As all the authors cited above write, running is our birthright, an integral component of how we evolved. It makes sense that removing it from our life would make us depressed. Cage any animal and the expectable litany of negative emotions follow. Your brain adapts in dangerous ways and, well, we can simply look at the troubling increase in obesity, depression, anxiety, and opioid addiction to find a correlation. Running is no cure-all, but it certainly does a brain good.

Donate a kidney now, and your loved one will have priority status if they need one later.
Up Next
Politics & Current Affairs

After widespread criticism of Facebook’s handling of election meddling, fake news and the Cambridge Analytica scandal, investors are growing increasingly frustrated at the company’s leadership.