After widespread criticism of Facebook’s handling of election meddling, fake news and the Cambridge Analytica scandal, investors are growing increasingly frustrated at the company’s leadership.

Now, some are openly calling for Zuckerberg to scale back his role in the company he created.

Business Insider recently interviewed six prominent independent Facebook investors who control a total of $3 billion in stock and “are trying to topple Mark Zuckerberg as chairman and tear up the company’s governance structure.”

One main point of contention is the way the company’s stock system is set up. Facebook uses a dual-class stock structure in which each class is valued the same monetarily but weighted differently in voting power. Facebook’s Class B stock has 10 times more voting power than the other.

Zuckerberg, who’s chairman and CEO of Facebook, controls more than 75 percent of Facebook’s Class B stock. This gives him nearly unchecked power over the company, enabling him to shoot down shareholder proposals, veto mergers, and vote directors on and off the board.

“We have concerns about the structure of the board that the company doesn’t seem ready to address, which can lead to risks — reputational, regulatory, and otherwise,” New York City’s comptroller, Scott Stringer, who oversees about $895 million worth of Facebook shares through city pension funds, told Business Insider. 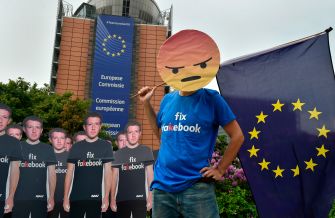 At Facebook’s annual shareholders meeting in May, James McRitchie, a shareholder activist, said the company was at risk of becoming a “corporate dictatorship.”

Another investor was forced to leave the room for shouting that “shareholder democracy is lacking at Facebook.”

Independent investors have called for Zuckerberg to step down as chairman and for Facebook to dissolve its dual-class stock structure. Neither have happened.

“The idea that there should be an autocrat in charge of a gigantic public company, which has billions of dollars of shareholder money invested in it, is an anachronism,” Patrick Doherty, the director of corporate governance at the office of the New York comptroller, told Business Insider. “It harks back to the 19th century when you had these robber barons who were autocrats and dictators.”

It’s unclear what the long-term consequences would be if Zuckerberg stepped down from one of his roles. Companies like Apple, Google, Oracle, Twitter, and Microsoft have all decided to separate the roles of CEO and chairman, as Jonas Kron, a senior vice president at Trillium Asset Management, told Business Insider.

A 2012 study from the Harvard Law School Forum on Corporate Governance and Financial Regulation found that companies typically spend more when one person acts as CEO and chairman. The study authors also noted that combining the roles results in an inherent conflict of interest and “appears to be indicative of the potential for other governance and management failures.”

“We believe that our capital structure is in the best interests of our stockholders and that our current corporate governance structure is sound and effective,” the company wrote in a statement, adding that removing Zuckerberg as chairman would cause “uncertainty, confusion, and inefficiency in board and management function.”

Related
Starts With A Bang
The path forward for astronomers and native Hawaiians
A history of injustice and the greatest natural location for ground-based telescopes have long been at odds. Here’s how the healing begins.
Thinking
“Give a f***, actually”: The surprising benefits of being grateful for things you dislike
Radical Emotional Acceptance calls on you to celebrate all of life’s emotions — even the negative ones.
Thinking
Visual thinking: How to understand the inner lives of animals
Humans are good visual thinkers, too, but we tend to privilege verbal thinking.
Strange Maps
The world’s longest straight line connects Portugal to China
It’s nearly 20,000 miles long.
The Well
This is what the fourth dimension looks like
Left–Right, Back–Forth, Up–Down. What’s the fourth dimension?
▸
3 min
—
with
Brian Greene
Up Next
Technology & Innovation
Jonathan Safran Foer: One thing we can all agree upon
Maybe everything we do is bad. But it’s not all bad to the same extent. Writer Jonathan Safran Foer on factory farming and free-range parenting in 2018.