A few weeks ago I published an article on ways to implement creative change based on Jennifer Mueller’s new book, Creative Change: Why We Resist It… How We Can Embrace It. Mueller argues that while we generally honor creativity as a driving factor in business and life, most of us default to the status quo when making decisions.

The rewards might far exceed the risks — the risk of not changing might prove to be the worst decision of all — yet Mueller says beyond the lip service we pay to creativity, we’re generally conservative in our decision-making. While her book predominantly focuses on creativity in business, her technique for implementing creative change in life is applicable to many domains. Creativity takes effort but is possible.

But what, exactly, is creativity? A group of researchers wanted to know if it is a distinct, measurable mental state. Their recent study, based at the University of Western Ontario, Canada, found that there are ways of training your brain to become more creative that require a deep and focused training period — and yes, it is a distinct state. Winging it, it turns out, is not so effective.

The study, authored by Joel Lopata and published in the journal Neuropsychologia is based on 22 pianists — 13 men, nine women, average age 26.2 — who were asked to either passively listen to, perform rote playback, or improvise on jazz melodies. The musicians had been playing for between four and 48 years.

During their performances, the researchers hooked up each pianist with EEG caps to measure their brainwaves. They discovered electrical activity in the prefrontal cortex was most creative — measured by the optimal synchronization of alpha brainwaves — when certain musicians were improvising. This higher level of synchronization only occurred in pianists with formal improv training, causing the researchers to speculate that a specific and devoted focus on a skill aided them in being more creative. 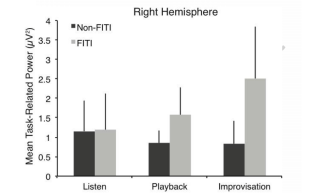 The volunteers were broken down into two groups: one with formal institutional training (FITI), the other without (non-FITI). The trained group included those who had studied in organized programs in high school, college, or at a music academy, for at least four weeks, as well as at least four weeks of private training. The non-trained group, which included 12 of the 21 pianists, were self-taught improvisational players that had learned by reading about it or through experimentation.

The researchers noticed that synchronization occurred in trained musicians when each was playing back a previously heard melody, but there was more electrical activity when they were improvising. The same was not true for untrained pianists. When expert musicians later listened to the recordings, they most favorably rated improved performances that featured the highest level of synchronization.

This caused Lopata to note, “Our results suggest that creativity can be characterized as a distinct mental state — one that can be nurtured through training, and that can reflect the quality of the finished product.”

The three conditions for creativity according to this research team include engagement in an activity, spontaneous processing of thoughts, and the expression of these thoughts through a medium (such as a piano). Another unrelated study found that while electrical brain stimulation in novice jazz musicians increased their performance, the opposite occurred with expert players—merely electronically stimulating your brain does not appear to provide you with masterful skills.

The results verified the researchers’ speculation that creativity is a distinct mental state that benefits from formal training. In the study, they cite the founder of the psychological concept ‘flow’, Mihaly Csikszentmihalyi, who has previously stated that entering flow states becomes easier and more enjoyable the more you practice your chosen skill. Enjoyment in that skill is also a big driver in entering flow states.

The old idea that “practice makes perfect” might be a stretch as perfection is a relative term. But now “practices makes creativity more likely” has a neural basis — one these researchers believe can potentially be utilized and applied by creative people of all types. As they conclude:

The task-related differences in upper alpha synchronization that we observed support the view that creativity can be conceptualized as a distinct mental state occurring during spontaneous musical performance. Our findings further imply that creativity can be nurtured through training, and illustrate that immersion in the creative state has high cultural and economic value because it yields higher quality products.

After the 2011 Fukushima disaster, it was Germany, not Japan, that cracked down most severely on nuclear power plants.
Up Next
Sex & Relationships

Female nudity is powerful – but not necessarily empowering

Can female nudity ever be empowering?