In September 2017, Hurricane Maria slammed into the island of Dominica. The category 5 storm then tore across the West Indies and up the Atlantic. Islands such as Haiti, Puerto Rico, the Dominican Republic, the Bahamas, and the U.S. Virgin Islands were devastated by the crashing storm surges and stampeding winds. Today, Puerto Rico’s official death toll stands at a staggering 2,975.

We were not ready for Hurricane Maria, and we aren’t preparing for the next natural disaster either. And they are coming. Weather scientists aren’t sure if climate change will increase the number of hurricanes, but they expect the warmer oceans to intensify their impact. We’ll need to adapt.

This said, fellow members of the animal kingdom are already acclimating. As reported by New Scientist, two species of anole lizards on Dominica have developed super strong grips in response to Hurricane Maria. Their improved cling helped the species survive, but scientists aren’t sure what caused the rapid adaptation. 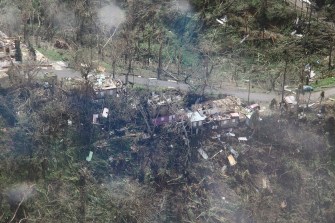 Hanging on for dear life

Back in 2016, Claire Dufour, an evolutionary ecologist at Harvard, and her team visited Dominica to study two species of anoles: the native anoles and the crested anoles (the latter of which are an invasive species). They were interested in how the lizards coexisted and recorded data on their body size, toe features, and grip strength.

Then Hurricane Maria hit. The storm crushed the island’s cities and left a lasting, perhaps indelible, imprint on its ecology.

Dufour and her team returned in 2018 to re-examine the anoles. The lizards they found had stronger grips than the ones they examined in 2016. Not surprising, really. One would expect stronger, fitter anoles to be more capable of surviving Maria’s high winds.

What did surprise the scientists, however, was that the lizards’ body size hadn’t changed, nor their toe-pad size. Just their power to cling. Additionally, their grip strength averaged to an astounding 10 times stronger than previously recorded. The anoles, it seems, had rapidly evolved to meet intense environmental demands. The strong clingers managed to weather the storm and passed on their genes to the next generation.

“This study shows that hurricanes may be a previously overlooked driver of performance in Anolis lizards,” Dufour told New Scientist. “This is pretty unique.”

The researchers published their findings last month, May, in the Journal of Zoology.

Is it evolution in the making?

Another study, this one published in Nature, looked at anole toe-pad shapes and found that hurricanes induced changes there, too. Like Dufour’s team, these researchers believe that these adaptations imply natural selection at work.

“This is a striking case of rapid evolution, which, as we can see here, can proceed exceedingly fast, even within a generation,” Carol Lee, at the Center for Rapid Evolution at the University of Wisconsin at Madison, told the Atlantic. “I expect there will be many more cases like this in the future, where catastrophic events impose strong selection on populations, and where populations will need to evolve or go extinct.”

Other researchers aren’t as sure yet. If the lizards’ newly minted grip strength and toe-pad shape are not heritable, then they have not become part of the species’ genetic makeups. In which case, the changes are the result of phenotypic plasticity, meaning an organism’s characteristics are flexible enough to be influenced by the environment without invoking evolution.

Both studies say additional research is needed to determine if hurricanes are overlooked evolutionary drivers or molders of elastic characteristics.

If these changes are indeed hurricane-induced natural selection, however, then “our understanding of evolutionary dynamics needs to incorporate the effects of these potentially severe selective episodes,” Dufour writes.

While the anoles may be able to adapt to the more extreme weather, other species won’t be so lucky.

In a meta-analysis of more than 130 studies, Mark Urban, biologist and associate professor at the University of Connecticut, found that climate change “threaten[s] one in six species under current policies.” Australia, South America, and New Zealand showed the highest extinction risks, but risks across the globe and taxonomy accelerated with increases in global temperature.

Increases in global temperatures will also allow insects and invasive species to spread to new territories, increasing the risk of insect-borne diseases and further damage to local ecosystems. And the intensity of extreme weather will continue to damage human cities and agricultural production.

As we enter hurricane season again, we’ll unfortunately have more chances to see how the anoles, and people, adapt to meet the increased pressures of climate change.

Virgin birth – which involves the development of an unfertilised egg – has preoccupied humans for aeons. And although it can’t happen in mammals, it does seem to be possible in […]
Up Next
Communication

Creative collaboration: How to get your team to bring their A-game

“Just tell me what you want me to do, and I’ll do it.” In her Big Think+ video, “Empower Your People — Conversational Moves for Engaging Your Team in Creative […]