When Hurricane Maria made landfall on Puerto Rico, it didn’t just flatten houses and flood hospitals – it plunged the island into a darkness that many islanders have yet to emerge from, both literally and metaphorically.

The catastrophe sent the island into the longest blackout in US history. Six months after the disaster, many residents are still without access to power. “Such prolonged darkness is insidious to community mental health,” says Oxiris Barbot, First Deputy Commissioner of the New York City Department of Health and Mental Hygiene.

Barbot visited the island as a relief worker two months after the disaster and found nearly everyone she met knew someone in their immediate circle or one degree removed who had contemplated or died by suicide. Preliminary data from Puerto Rico’s health department suggests that suicides were up nearly a third in September and October compared to the same period for 2016.

Physicians know that extreme events can have negative impacts on mental health, causing symptoms of anxiety, depression and post-traumatic stress disorder (PTSD). But in a recent paper, researchers admitted that much is still unknown about the consequences of disasters on long-term behavioural health.

In Puerto Rico, most of the islanders were unable to evacuate and so weathered the full trauma of the storm. Some were isolated and without assistance for days or weeks afterwards. In the following months, many faced hardships such as bereavements, loss of income and limited access to fresh water and food. 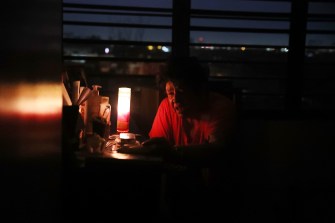 Carmen Correa uses a candle for light in her dark apartment as she deals with the aftermath of Hurricane Maria on September 30, 2017 in San Juan, Puerto Rico.

It’s an experience that could leave a lasting imprint. “Exposure to trauma not only affects you in the moment, it affects you for the rest of your life if you don’t have access to support services that will help you develop effective coping skills,” Barbot says.

But little is known about how survivors of extreme events respond relative to the help they receive, according to Sandro Galea, Dean at the Boston University School of Public Health. He says scientists need to investigate the most effective post-disaster responses to both physical and mental health challenges: “The stigma that you can just ‘get over’ mental illness remains. In truth, one can get over mental illness roughly the same way one can get over a broken bone by oneself – with difficulty, and likely in a way that will not result in proper healing.”

Public health researchers need to invest in research that prepares health systems for the next extreme event, Galea says. The first step would be to identify at-risk populations from both a physical and mental health perspective. Then health workers could act to create resilience and mitigate the consequences in vulnerable communities.

Doing such research now, before the next hurricane hits, could reap significant financial savings in disaster response efforts. “The payoff is enormous,” Galea says. “And if we ask the right questions, we can mitigate mental health consequences that cost people’s lives.”

This article first appeared on Mosaic and is republished here under a Creative Commons licence.

Tags
climate changedepressiondisaster reliefmental healthnatural disastersuicide
In this article
climate changedepressiondisaster reliefmental healthnatural disastersuicide
Related
Thinking
What if you could rewire your brain to conquer suffering? Buddhism says you can
For Buddhists, the “Four Noble Truths” offer a path to lasting happiness.
Neuropsych
Memory and the benefits of forgetting
Forgetfulness isn’t always a “glitch” in our memories; it can be a tool to help us make sense of the present and plan for the future.
Health
What happens when regular porn watchers abstain for a week?
Researchers watched for signs of withdrawal — but didn’t find any.
Health
What decades of research tells us about living the good life
Warm relationships protect your mind and body from the slings and arrows of life.
The Learning Curve
The world must learn from “karoshi,” Japan’s overwork epidemic — before it’s too late
It is estimated that as many as 488 million people worldwide were exposed to dangerously long working hours in 2016.
Up Next
The Present
Sign of the times: School designed to limit impact of mass shootings
With little progress on other avenues to preventing mass shootings, one firm has employed architecture to save students.