Asian elephants regularly leave protected areas in search of food, breaking into into human communities intent on keeping them out. People may use electrified fencing to discourage the magnificent animals in the first place, and should that fail, try to scare them off with firecrackers and gunshots.

Such interactions are disturbing at best, but the Asian elephant is also highly endangered due to habitat loss and poaching. In hopes of finding a more humane solution, Joshua Plotnik of Hunter College followed a hunch, and his resulting find has just been published in PNAS. What did he discover? Asian Elephants can identify the most promising nearby quantities of food by smell alone.

In essence, they can count amounts of foodstuffs with their noses. 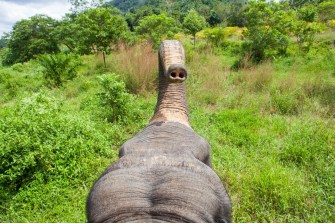 This is actually an Indian elephant, but, in any event, “Here’s sniffing at you.” Image source: Starik_73 / Shutterstock

A failed experiment led Plotnik to his suspicion. A middle school student study in which he was involved sought to test if elephants could follow visual cues — humans pointing — to find food in buckets. “They couldn’t,” Plotnik tells Inverse, “which surprised not only me but also the elephant handlers (mahouts) in Thailand.” The mahouts told him they’d assumed that elephants’ habitual picking up and returning tourists’ lost sandals was prompted by their own pointing out of the discarded footwear to them.

“This led me to a big turning point in my research focus,” Plotnik continues. “What if the elephants weren’t following the pointing cue, but were instead using their ears and nose to guide their behavior?” That elephants continually send their trunks and noses upward like periscopes to assess their surroundings suggests smell plays a significant role in their decision-making.

Plotnik and his colleagues set up a series of experiments at the Anantara Golden Triangle Elephant Camp and Resort in Chiang Rai, Thailand. They presented six Asian elephants with pairs of plastic buckets containing sunflower seeds — in each pair, one bucket had more seeds than the other, with a range of difference ratios. The buckets were covered, but had holes through which the smell of the seeds could escape. (The buckets were scrupulously washed out between tests to avoid lingering odors.) An elephant could choose one bucket from each pair to snack on.

The results were surprising, Plotnik tells the New York Times. “Remarkably, when we put two different quantities in the buckets, the elephants consistently chose the quantity that had more over less.”

Elephants were more or less successful depending on the ratio. With larger differences between buckets, the pachyderms were more accurate. (Two especially accurate elephants, Pepsi and Phuki, were right 80 percent of the time.) With more subtle differences in quantities, they chose correctly only up to about half the time.

The exact mechanism by which elephants count and compare food amounts isn’t yet known. Do larger quantities simply smell more? It is known that they have more genes related to smell — about 2,000 — than those renowned expert sniffers, dogs, who have only about 800. (Rats come in second with 1,200.) 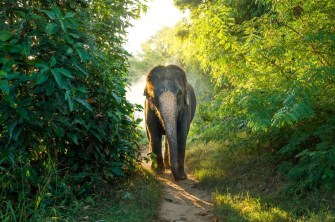 To Plotnik, the research suggests a new approach to managing Asian elephants roaming. As he tells Inverse, “By better understanding elephants’ needs in terms of habitat and resources, we can hopefully come up with better solutions to the conflict that take both human and elephant perspectives into account.” Perhaps olfactory cues can more gently guide elephants to safer pastures.

Tags
animalsconservationfoodintelligencenaturesensessmell
In this article
animalsconservationfoodintelligencenaturesensessmell
Related
Life
Our antidepressant drugs are affecting animals and ecosystems
A toxicologist explains the impacts of antidepressants on fish — and no, they’re not getting any happier.
Thinking
Visual thinking: How to understand the inner lives of animals
Humans are good visual thinkers, too, but we tend to privilege verbal thinking.
Life
Scientists use CRISPR to insert an alligator gene into a catfish
Disease kills off 40% of farmed catfish. This gene protects them.
Hard Science
200 years of exploring Antarctica
What we’ve learning from the world’s coldest, most forbidding, and most peaceful continent.
Strange Maps
The great European house cat migration
Ancient bones reveal that domesticated felines were at home in Pre-Neolithic Poland around 8,000 years ago.
Up Next
Hard Science
Something is producing weird orbits in the Kuiper belt — is it ‘Planet X’ or something else?
Some have suggested that there is no hidden giant out there.