In recent years, we’ve seen a variety of animals exhibit some proficiency at counting. Lions only attack other prides whose members outnumber their own, numerous critters can count, and bees appear to understand zero. Meet Authai, a 14-year-old Asian elephant living in Ueno Zoo in Japan. She’s the subject of a recent study from the Graduate University for Advanced Studies and the Japan Society for the Promotion of Science. The study offers the “first experimental evidence that nonhuman animals have cognitive characteristics partially identical to human counting.”

Much experimentation assessing animal numeracy involves the recognition of differences in quantities of similar objects. However, where other animals’ accuracy is affected by subjects’ distances from the objects — they need to be close together — by the number of objects used, and the ratio of differences between numbers of objects, none of that seems to bother Authai — for the study, she accurately assessed numeric differences with a success rate of 66.8 percent, or in 181 out of 271 tries, regardless of the variations researchers presented her.

A trunk for touchscreens

Authai is one of three Asian elephants the researchers instructed on the use of a special touchscreen — the other two failed to master the technology. Authai’s laptop sat atop a dolly and was outfitted with 46′′ LCD touchscreen.

Asian elephants have been shown in previous studies to have higher “relative quantity judgment” (RQJ) than other elephants. It’s not known why, but, as the study notes, “The Asian elephants and the two species of African elephants diverged more than 7.6 million years ago, so it is highly probable that they developed different cognitive abilities.” 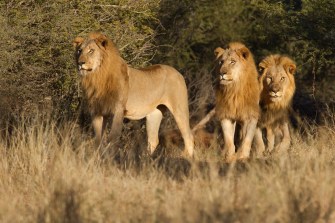 How other animals’ math seems to work

As numeracy in animals is well-documented, less is known about how it works. The paper discusses two different schools of thought:

Some think a combination of these two models may also be in effect in some animals.

How Authai’s math seems to work

During the experiments, Authai was instructed to touch the image representing the higher number in a series of comparisons. When she was correct, the computer played a sound and showed her and a neutral — that is, containing no objects to count — image. She was also rewarded with a piece of fruit. For wrong guess, a short beep was sounded, no fruit was given out, and the screen went blank. She was tested at distances of two and three meters from the display, and her handlers stayed out of view to avoid inadvertently giving Authai any visual cues.

The intent was “to rule out unintended factors, other than number of objects, which may have cued subjects in previous studies.” The researchers also recorded Authai’s response times.

The images Authai viewed from were designed to exceed the limitations of the accumulator and object-file models other animals appeared to employ in prior research. A wider range of difference ratios were employed, along with a greater number of objects, from 0 to 10.

The study sums up, “We found that her performance was unaffected by distance, magnitude, or the ratios of the presented numerosities.”

Interestingly, the study continues to says that, “consistent with observations of human counting, she required a longer time to respond to comparisons with smaller distances.”

This suggests that her numerical representation is not an instant, absolute representation as suggested in the object-file model; therefore, the enlarged object file model does not explain the unique performance of Asian elephants. Discrimination of quantities with smaller distances requires more precise and accurate representation of the subjects. Thus, her performance indicates that she required more time to increase the accuracy of the numerical representation, but not to represent increased magnitude. Because Authai’s performance cannot be explained by the current hypotheses, it is highly likely that unique abilities enable Asian elephants to grasp the number of items with accuracy which is unaffected by ratio, distance, or magnitude.

Tags
animalsbiodiversitybiologybrainintelligencemathscience
In this article
animalsbiodiversitybiologybrainintelligencemathscience
Related
Hard Science
Solved: 500-year-old mystery about bubbles that puzzled Leonardo da Vinci
The solution involves the infamous Navier-Stokes equations, which are so difficult, there is a $1-million prize for solving them.
Neuropsych
Inside the brains of aging dogs
In a citizen science project, thousands of pet dogs are helping scientists to understand what happens to memory and cognition in old age.
The Well
Can we condition ourselves to be heroes?
Neuroscientist Robert Sapolsky on the science of temptation, and the limitations of your brain’s frontal cortex.
▸
6 min
—
with
Robert M Sapolsky
Life
Our antidepressant drugs are affecting animals and ecosystems
A toxicologist explains the impacts of antidepressants on fish — and no, they’re not getting any happier.
Thinking
Visual thinking: How to understand the inner lives of animals
Humans are good visual thinkers, too, but we tend to privilege verbal thinking.
Up Next
The Present
Bombs sent to Joe Biden and Robert De Niro, latest in string of attempted attacks
Explosives sent to addresses linked to former Vice President Joe Biden and actor Robert De Niro were similar to bombs delivered to other political figures this week, officials said.