A study, “The harmful effects of captivity and chronic stress on the well-being of orcas (Orcinus orca)” recently published in Journal of Veterinary Behavior is the product of a unique collaboration of experts in marine mammal science, veterinary science, internal medicine, and psychiatry. It makes the case for a careful consideration of the impacts of chronic stress on captive orcas, at least 60 of whom are currently in captivity. Most have spent years or decades of their lives in these conditions. Around 57 percent of these orcas were born in captivity and 26 of them were captured young. (Orcas are actually the third most commonly confined cetaceans — there are even more bottlenose dolphins and beluga whales held in tanks.)

The study explains how the continual, oppressive stress inherent to a captive orca’s life is unhealthy and should be more thoughtfully addressed. Study lead author biopsychologist Lori Marino tells Big Think in an email:

“Our review shows that intelligence, complexity, and awareness are characteristics that make an animal more — not less — vulnerable to the effects of captivity. That seems counterintuitive because a lot of people think that the more mental resources you have the better you are able to cope with various situations. But it is also the case that the more mental capacity you have the greater your needs in order to thrive and the more extreme the impact of living in an artificial environment, that is, an environment outside your adaptive envelope.”

While skeptics may consider it a leap to assume that orcas are intelligent and emotional enough to suffer the ill effects of stress, Marino responds, “That would be a claim in search of evidence. Stress is a common phenomenon in all mammals and many other organisms. The effects of chronic stress have been well-studied in mice, rats, dogs, etc.” The study provides ample evidence that orcas are exceptionally intelligent, feeling creatures in any event. 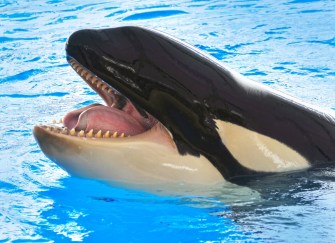 The orca brain exhibits neurobiological traits that are considered prerequisites for complex psychology, emotion, and behavior:

Even more important than sheer brain size is its size in relation to an animal’s body. This is captured as the organism’s encephalization quotient, or EQ. Says the study, “Odontocetes, and in particular Delphinoidea [the superfamily to which orcas belong], are the most highly encephalized nonhuman taxonomic group known … except modern humans.”

Orcas also have the most highly convoluted, or folded, neocortical surface of all mammals including humans, and their ratio of neocortical surface to brain weight also exceeds the human brain’s, suggesting an organ well-suited to higher-order functions.

Among a range of other clues presented by the study that suggest orcas are highly intelligent creatures are these: 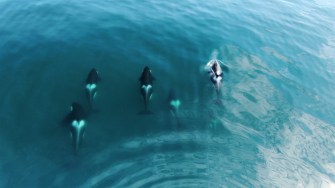 Observations of orca behavior richly supports the implications of their neurobiological structures. Marino says, “Free-ranging orcas live in tightly-knit social groups that are necessary during their long juvenile periods and afterwards. They support each other, help each other when in trouble, and grieve each other. Mothers and calves are very tightly bonded. In some groups, male orcas stay with their mom their whole life and if mom dies [the male offpsring] may go into a deep depression and die as well. Family and social group are everything.”

Orcas also demonstrate culture, with vocalizations and even hunting methods unique within groups and passed from generation to generation.

“Orcas at Punta Norte, Argentina, hunt sea lion and elephant seal pups by beaching themselves and capturing the pups, typically in the surf zone,” according to the study. 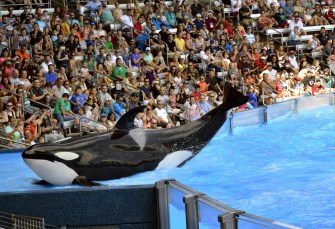 In the wild, free-ranging female orcas live an average of 46 years — some live as long as 90 years — and males 31 years, or as long as 50-60 years. Captive orcas rarely live more than 30 years, with many dying in their teens or 20s. Their medical histories can be difficult to access due to facilities’ desire for confidentiality. Nonetheless, some morbidities, or causes of death, have become clear over time.

One review from 1979 identified infectious disease as the culprit behind the death of 17 captive North American orcas who’d died since 1965 prior to the report’s writing. The new study cites publicly available documentation revealing that between 1971 and 2017, SeaWorld parks alone have experienced 35 documented orca deaths, and that, “When causes of death were available, the most commonly implicated conditions were viral, bacterial and fungal infections, gastrointestinal disease, and trauma.”

Infections such as these may not in and of themselves have necessarily been lethal, but when combined with orcas’ “weakened immune system, chronic exposure to chemical irritants or trauma to the skin, excessive or improper use of antimicrobials, and an imbalance in the microbiota of the body or environment (which may exist in tanks),” they become deadly. Common fungal infections may also be especially dangerous in this context “as a result of long-term and aggressive antibiotic treatment, overtreatment of water for purity, or both.” The same is true for untreated dental infections.

Another frequent cause of orca death: gastrointestinal ulceration — ulcers — caused by prolonged exposure to stress. 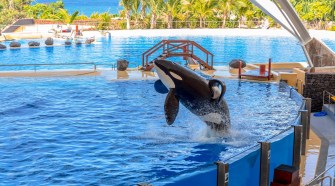 “Importantly, the poor health and short lifespans of captive orcas are most clearly understood as connected elements in a cycle of maladaptiveness to the conditions of captivity that involves behavioral abnormalities, physical harm and vulnerability to disease.”

The paper shows, says Marino, that “when you examine the totality of the welfare findings for captive orcas the whole picture fits best within a larger common framework of evidence on how stress effects captive animals. We know that, when confined, other animals show the same kinds of behavioral and physiological abnormalities that captive orcas do. This is not mysterious or even controversial. It is basic science.”

Marino cites as especially damaging the manner in which captivity prevents orcas from making social connections. Tanks also deprive them of places to retreat, making conflicts inescapable even temporarily. Finally, captive orcas are likely to become bored and chronically demotivated by the frustration over their loss of autonomy.

The study also notes physical effects brought on by long-term stress, including:

Marino explains why it was important to conduct this study, saying, “My co-authors and I wrote this review to bring all of the available information on captive orca well-being together in one place and to suggest that we might all best be able to understand the effects of captivity within a very familiar and well-researched model of how chronic stress effects all organisms. We want this paper to be a catalyst for dialogue and further scientific exploration based on data as to how we can better understand who orcas are and how we can identify the important elements needed in a captive environment for them to thrive.”

The Whale Sanctuary Project is hosting a free public webinar to discuss the study and the effects of stress on captive orcas with three of the study’s authors on Tuesday, July 14.

Willpower alone likely isn’t enough to replace a bad habit with a good one.
Life

Screens were around in previous generations, but now they truly define childhood.
Life

Now they’re pointing the way to future battery technologies.
Up Next
Health

A new study explores how the brain encodes different scents — a topic which scientists know relatively little about, compared to our other senses.