It’s clear that something is warping the orbits of objects out at the edge of our solar system, but what that might be remains a matter of conjecture. Probably the most exciting theory is that it’s a thus-unseen massive object popularly dubbed “Planet 9” or “Planet X,” probably a better name as long as there’s some debate about the status of the original Planet 9 — Pluto — and since “X” suggests the unknown at the same time as it’s the Roman numeral for 10.

In any event, some have suggested that there is no hidden giant out there, but that the orbital distortions we’re seeing are due to the pull of combined gravitational forces from a group of smaller trans-Neptunian objects (TNOs) in the icy Kuiper belt. This idea just got a strong boost from Antranik Sefilian, University of Cambridge, and Jihad Touma of the American University of Beirut in Lebanon.

They have, for the first time, developed a model that demonstrates how such a combination field could generate precisely the mysterious orbits that have been observed. 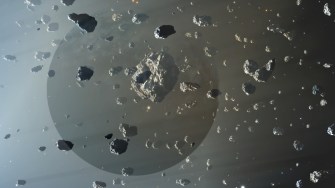 The problem Planet X solved and the problem with Planet X

Out at the edge of our solar system is an area of dwarf planets and icy rocks, the Kuiper belt. By and large, the orbits of these bodies, Kuiper belt objects (KBOs) , are influenced by our system’s giant planets — Saturn, Jupiter, Uranus, and Neptune. However, a few years ago, five KBOs caught astronomers’ attention by having orbits that cluster together, suggesting that some single thing is pushing them into close proximity to each other. (As of this writing, about 30 of these outliers have been spotted.)

Crunching the math to figure out what could be doing this led Caltech astronomers Konstantin Batygin and Mike Brown to propose the existence of a perturber, a massive planet that’s 10 times the size of Earth and has an orbit extending some 20 times farther away from the Sun than Neptune. A full circuit would take Planet X between 10,000 and 20,000 years. By comparison, Neptune only requires 165 years to orbit the sun.

The main problem with Planet X is obvious. Astronomers’ best efforts to see it, thus confirming its existence, have come up short so far. 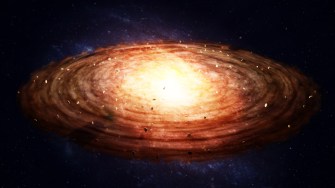 KBOs for the TKO?

“The Planet Nine hypothesis is a fascinating one, but if the hypothesized ninth planet exists, it has so far avoided detection,” says Sefilian. “We wanted to see whether there could be another, less dramatic and perhaps more natural, cause for the unusual orbits we see in some TNOs. We thought, rather than allowing for a ninth planet, and then worry about its formation and unusual orbit, why not simply account for the gravity of small objects constituting a disc beyond the orbit of Neptune and see what it does for us?”

So Sefilian and Touma began modeling behavior of the TNOs in the presence of the known solar system planets plus a disc of small icy bodies, out beyond Saturn, that together had a mass roughly that of the proposed Planet X. Their initial virtual disc explained the orbits of some of the observed TNOs, though not all. When they started playing with the composition of the disc, however, the remaining TNO orbits could be accounted for.

One potential gotcha with the disc hypothesis is that in order for a disc of sufficient mass to exist, the mass of the entire Kuiper Belt would have to be somewhere between a few times and 10 times Earth’s mass.

Of course, Sefilian’s and Touma’s disc is thus far as unseen as Planet X. “The problem,” explains Sefilian, “is when you’re observing the disc from inside the system, it’s almost impossible to see the whole thing at once. While we don’t have direct observational evidence for the disc, neither do we have it for Planet 9, which is why we’re investigating other possibilities. Nevertheless, it is interesting to note that observations of Kuiper belt analogs around other stars, as well as planet formation models, reveal massive remnant populations of debris.”

So, Planet X or the newly proposed disc? Not need to choose yet, Sefilian says. “It’s also possible that both things could be true — there could be a massive disc and a ninth planet. With the discovery of each new TNO, we gather more evidence that might help explain their behavior.”

Tags
astronomycosmosphysicsplanetspredictionspacetelescopes
In this article
astronomycosmosphysicsplanetspredictionspacetelescopes
Related
The Well
This is what the fourth dimension looks like
Left–Right, Back–Forth, Up–Down. What’s the fourth dimension?
▸
3 min
—
with
Brian Greene
The physics of entropy and the origin of life
How did complex systems emerge from chaos? Physicist Sean Carroll explains.
▸
6 min
—
with
Sean Carroll
The Universe in 90 minutes: The Multiverse, time, free will, God, & more
Everything you ever wanted to know about the Universe, explained by physicist Sean Carroll.
▸
1:33:47 min
—
with
Sean Carroll
Life
“I went to space and discovered an enormous lie”
What astronaut Ron Garan saw in space changed his life forever – here’s what it taught him.
▸
8 min
—
with
Ron Garan
Hard Science
10 paradoxes that will stretch your mind
From time-traveling billiard balls to information-destroying black holes, the world’s got plenty of puzzles that are hard to wrap your head around.
Up Next
Starts With A Bang
When Will The Universe Get Its First ‘Black Dwarf’ Star?
13.8 billion years isn’t close to enough time, but if we wait long enough, even our Sun will become one.The Big Bang happened approximately 13.8 billion years ago, and it might […]