An eclectic combination between a cultural icon and prisoner reforestation efforts has led to a commendable new initiative in Michigan. Since May of 2019, hundreds of volunteers have planted 1,000 “happy little tree” saplings across Michigan State Parks. Honoring the late painter Bob Ross, the original program was first known as “Prison Grow.”

Ross came to prominence as the host of The Joy of Painting, an art program that aired on PBS from the early ’80s to mid-’90s. He died a year after the program ended. He was known as the soft-spoken and calm painting guru, often comically anthropomorphizing his paintings as he went along.

His videos populate Youtube today and he’s since become a cultural icon as people discover his soothing and generous demeanor. Ross’ likeness and signature hairdo has been plastered over countless shirts, mugs, and his imprints are instantly recognizable.

From the great beyond, Ross still teaches people how to paint “happy little trees— now, he’ll also be the face of a project aimed at planting real ones. The new initiative stems from a partnership between Bob Ross Inc. and Michigan’s Department of Natural Resources (DNR). Ross’ organization has agreed to let the state use his likeness and taglines to promote the state’s Prison Grow program in his honor.

Each year, inmates from three different Michigan correctional facilities assist in growing around 1,000 trees. The Michigan Department of Natural Resources’ Parks and Recreation Division gathers volunteers to go out and plant these new trees.

The new trees are used to replace those in state parks that have become diseased or intentionally damaged. In 2019, 22 out of Michigan’s 103 parks will receive new trees grown in correctional facilities. The program takes native seeds from the local region so that the replacement trees will be able to survive and grow healthy.

Prisoners part of the program consist of people who were successful in the prison’s career and technical education program. Here they learn horticulture skills and how to care for and nurture growing trees.

This meshes well with the philosophy of Ross. The painter understood the healing force of nature imbued within his work. A large part of Ross’ popularity stems from the contact joy people get from watching him teach and create.

Michelle Coss, coordinator for the DNR’s Parks and Recreation division, explains to the magazine Roadtrippers how the whole partnership got started.

“I was thinking about trees leaving prisons and going to a campground and that they’re happy and it came to me: ‘happy little trees…’ Well, wouldn’t it be cool if we reached out to Bob Ross Inc. and asked if we could use that moniker for the program? So we did, and they loved it.” 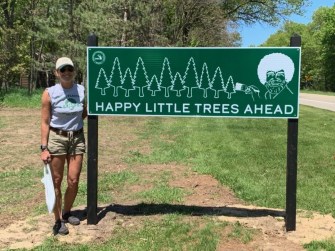 As part of the initiative, which originally launched on Arbor Day, Ross’ likeness appears on the signage at the parks and on volunteer t-shirts. Coss says that over 500 people signed up to help them plant the trees.

The stewardship of the park is a noble endeavor. Volunteers gather seeds from native plants, remove invasive plant species, clean up overgrown areas and, of course, plant the new trees. These are essential functions of maintaining and managing the areas within state parks.

This happy forest can serve as an example to all of us. As an homage to Bob Ross, this reforestation effort will elicit real healing change. With collective effort, environmental mistakes can be remedied.

From the brushstrokes of his happy little canvas and the image of life he left behind, new arboreal life will flourish.

Environmental activists want us to feel “flight shame” if we can take a train, instead. But this isn’t entirely realistic, even in Europe.
Up Next
Starts With A Bang

Starts With A Bang Podcast #48: The Event Horizon Telescope

You’ve seen a black hole’s event horizon for the first time thanks to them. But they’re only getting started.Earlier this year, 2019, the Event Horizon Telescope collaboration revealed the first image […]