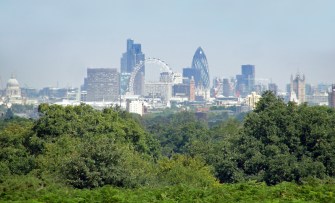 View of London from Sawyer’s Hill in Richmond Park.

Did you know that London qualifies as a forest? The UN’s Food and Agriculture Organization defines a forest as a contiguous area with at least 10 percent tree canopy cover. Greater London’s trees manage more than double that (21 percent).

But then there are no less than 8.4 million of the leafy bastards standing around London’s 600 square miles – that’s almost one for every Londoner. So, it’s not entirely surprising that London is, according to the UK’s own Forestry Commission, ‘the world’s largest urban forest.’

Similar to its human inhabitants, London’s trees are a cosmopolitan bunch with origins all over the world. No British city has a wider diversity of tree species. You can now explore that diversity in all its glory thanks to TreeTalk, a web page which identifies 700,000 individual trees throughout Greater London and generates tree walks from the starting point of your choice.

If you’re currently confined to Britain’s metropolis, the web page – also available as a smartphone app (Android only for now) – is an interesting way to spice up your daily exercise walks and learn a bit about your immediate surroundings. And if you’re a London junkie pandemically deprived of a visit, TreeTalk offers a novel way to virtually stroll through your favorite city.

A rather rarer import from Wuhan: the Chinese photinia.

Zoom in and click on any tree; or type in an address or postal code to auto-generate a walking tour of the area. You’ll find species that are common as muck, and with just a little bit of luck you’ll come across trees in three categories of rarity: bronze (less than 400 specimens throughout the city), silver (75 or less), and gold (10 or less).

For example, go to Westbourne Gardens, in West London’s Paddington area: there you’ll find the only four specimens of the Chinese photinia that TreeTalk has identified so far in all of London. Widely used as a greening plant in Chinese cities, the tree is omnipresent along all major avenues in Wuhan – yes, that Wuhan.

Yet Wuhanites are less than keen on the semen-like smell its flowers spread each spring, and some have called for the trees to be replaced. No such complaints seem to have been registered yet by the photinias’ Paddingtonian neighbors. 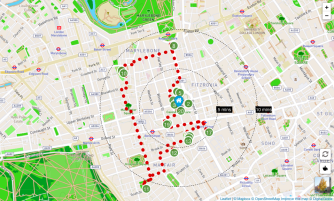 A tree walk starting and finishing at Cavendish Square, a leafy refuge just off Oxford Circus.

Older than the dinosaurs

Another example: set your sights on lovely Cavendish Square, a small park just off busy Oxford Circus popular with office workers on their lunch break. The square is dominated by London planes (#20 on the map), one of the more common street trees in Central London.

TreeTalk’s auto-generated route around the area leads past common trees like the ash (#1), the chanticleer pear (#3) and the fastigiate Norwegian maple (#6), but also along such rarities as the monkey puzzle tree (#9; only 32 found so far in London), the hackberry (#17; and only 17 in London) and the variegated wedding cake tree (#11; only 15 in London).

Less rare but still remarkable are a ginkgo (#4), a species older than the dinosaurs; one of less than 200 olive trees in London (#12); and the tree of heaven (#16), also known as the ‘ghetto palm’, because it thrives on wasteland. 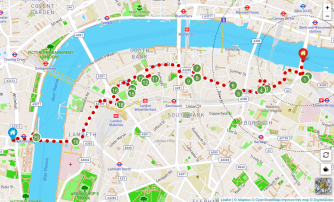 A walk south of the river, past some of London’s rare and common tree species.

From A to B

#20 on this walk is, again, a London plane. Ubiquitous in the center, this tree is considered ‘native’ to the city, but its past is a bit more complicated than that. The species was discovered in the 17th century in a nursery garden in Vauxhall, on the south bank of the Thames. 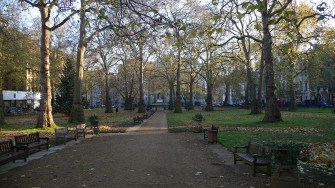 ‘Discovered’ is the right word, as it was unknown before. The London plane may be a hybrid between an Oriental plane, brought to Britain in the 16th century, and an American sycamore, imported in the early 17th century. One of each was indeed present in that Vauxhall nursery.

As it turned out, the ‘new’ species was well suited to its urban environment: it’s not too picky with regard to soil, it requires little root space, and its flaky bark easily sheds pollutants. It flourishes despite pollarding and can grow up to 30 meters tall.

Because of those qualities, the London plane was chosen for mass plantings across the city, to provide much-needed greenery during its rapid expansion in the 19th century. But the London plane is not just hardy, it’s also quite ornamental. The 30-odd specimens planted in Berkeley Square in 1789 are among the oldest and grandest in London. 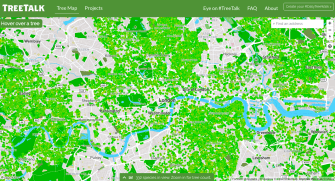 Trees are useful, valuable and pleasant assets for any city.

Trees are an important asset to any city, and not just for their grandeur. They provide shade and prevent flooding, store carbon, and help cool nearby buildings. A recent iTree study figures that London’s trees suck out 2,261 tons of pollution from the air each year and that their total environmental benefit amounts to about £132.7 ($164.6) million per year.

But grandeur also counts for something. Literally, in fact: It’s been shown that tree-lined streets boost house prices by as much as 15 percent. No wonder ‘leafy’ is code for ‘affluent’.

The iTree study recorded 126 species, not counting the 2,000 species and varieties found at Kew Gardens. 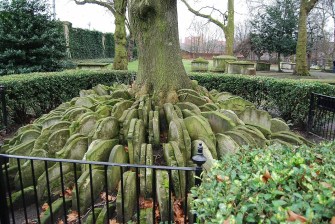 The Hardy Tree: ‘designed’ by Thomas Hardy, before he turned his hand at writing.

For its part, TreeTalk describes more than 600 species, but it is far from complete. It provides information on just 700,000 specimens – not even 10 percent of Greater London’s overall total. That’s because some of London’s 33 boroughs have not yet or not completely provided data on the trees in their area.

For another take on London’s arboreal heritage, check out the Great Trees of London, a collection of 54 of the city’s most remarkable trees, as chosen by the Londoners themselves.

This list was born in the aftermath of the Great Storm of 1987, which felled around 15 million trees across the country. The Countryside Commission selected 41 much-loved survivors suggested by the public, a list that was later expanded to 61 – sadly, six trees have since been lost.

They include such venerable ancients as the Royal Oak of Richmond Park, which is around 750 years old; the Hardy Tree at St Pancras Old Church, surrounded by a macabre arrangement of decommissioned gravestones; one of the London planes in Berkeley Square; and the Totteridge Yew, which may be more than 2,000 years old – older than London itself.

Many of the furniture giant’s products are named after Swedish locations. Not everyone is happy about that.
Up Next
Starts With A Bang

(Image credit: NASA, ESA, A. NIERENBERG (JPL), AND T. TREU AND D. GILMAN (UCLA)) On the largest scales, dark matter holds the Universe together. But on small ones, it helps reveal […]