The Cost of Blowing up the Death Star? The Biggest Recession in the Universe

This is not the outcome you're looking for. 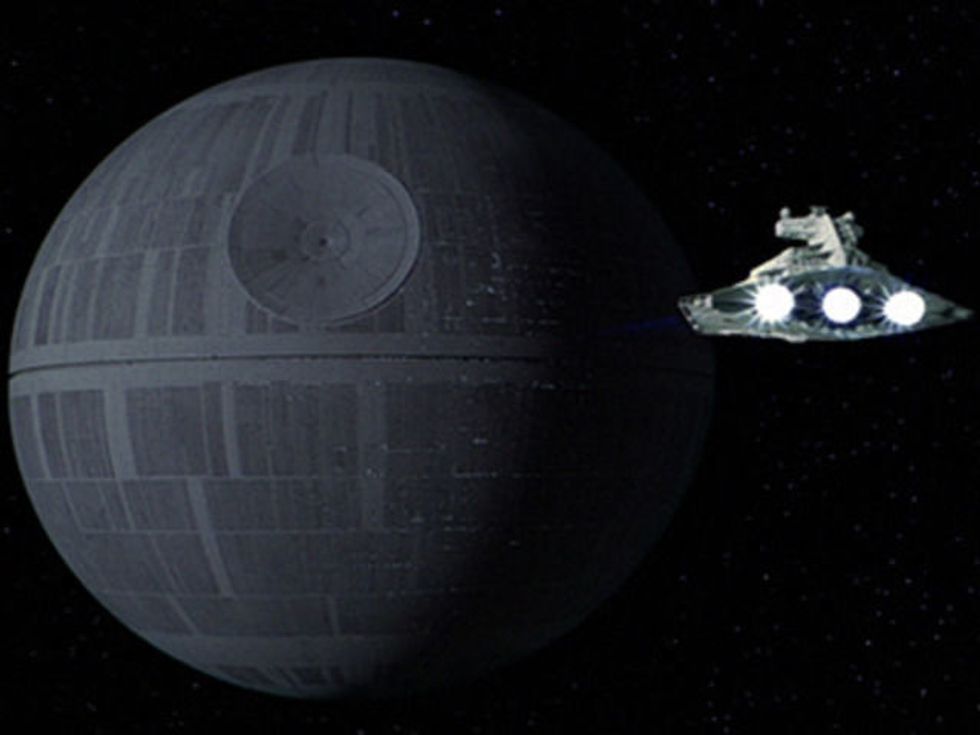 Blowing up the Death Star would cripple the universe’s economy.

That’s the premise of a new paper out of Washington University. Written by financial engineer Dr. Zachary Feinstein as a way of applying his esoteric knowledge to a popular subject, the paper uses real-world economics to examine the total costs of an enormous setback in the fictional Star Wars universe.

In case you’re not up on your Star Wars, here’s a recap: a long time ago in a galaxy far, far away, an evil Empire built a moon-size laser called a Death Star to blow up anyone who opposed its rule. A Rebel Alliance stole the plans for the Death Star, shot at a weak spot, and blew it to smithereens. The Emperor did not appreciate his moon-size laser gun being blown up and ordered the construction of a new, better Death Star. The Empire built one -- this time with a separate, hidden shield generator. The rebels found the shield generator, destroyed it, and blew the new Death Star to smithereens, too. The end!

That ending may seem happy, but there’s a real cost involved.

First, Feinstein needed to figure out how much the Death Star might cost in the real world. He calculated that by petitioning the White House to build a Death Star of their own. “The chief of the science and space branch at the White House's Office of Management and Budget actually responded to that petition,” CBC reports, estimating the cost to build a Death Star at $850,000,000,000,000,000 ($850 quadrillion dollars) -- and that’s "just the cost for the steel,” Feinstein told CBC. “I took those numbers and found actually instead of $800 quadrillion, it would be $193 quintillion."

Next, Feinstein calculated the percentage of Galactic GDP the Death Star would cost. $193 quintillion is equivalent to "0.21 per cent of GDP per year in the U.S. from 1942 to 1946,” Feinstein writes in his paper. “Assuming a galactic economy that's growing at two per cent per year, the gross galactic product [GGP] at the time the first Death Star was built would be $6.09 sextillion.”

Blowing up something that expensive would cost “15-20 per cent of the [universe's] economy,” Feinstein calculates. He explains in his paper:

Overnight, in my simulations, I would expect a 12.9 per cent drop in the gross galactic product and that number could get up to anywhere up to about a 30 per cent drop, which is greater than the 26.7 per cent that the U.S. felt during the great depression.

That drop would cripple any economy on a good day, but in the economy of Star Wars: A New Hope and Star Wars: Return of the Jedi? "It would have been a complete disaster," Feinstein summarizes for CBC. "It would have been beyond anything that we've ever seen on Earth." Why? Because before those movies and their prequels, there was economic stagnation. “The Intergalactic Banking Clan [IGBC] which is known to be “too big to fail” as it was nationalized following the Clone Wars to avoid a default on its debt,” according to the paper. Plus, "there was no economic growth for 25 millennia [prior to A New Hope],” Feinstein told CBC. “[blowing up the Death Star] is going to foment unrest, it's going to create a situation where war is certainly possible, where authoritarianism is certainly possible." Given that the next chronological film in the series Star Wars: The Force Awakens covers the rise of an authoritarianism regime, Feinstein’s theory makes sense.

All that said, there’s an additional cost that isn’t factored in here: the cost for Endor. Remember; Endor was close enough to the Death Star to house its shield generator. If the giant death ball blew up, it would decimate Endor, eradicating its forests in a blast of fire and burning all of its adorably fuzzy Ewoks alive. 11 different physicists calculated that conclusion for Tech Insider. More importantly, that outcome is actually canon in the Star Wars universe. It’s known as the “The Endor Holocaust,” and YouTuber Matthew Patrick explains it in detail here using data from the University of Pennsylvania:

Thankfully, there might be a silver lining. The cost of building both Death Stars might not actually be as high as Feinstein and the White House thinks, because it wouldn’t be made of steel. According to aerospace engineer Rand Simberg, steel is a good material for a battleship but a terrible one for a satellite -- which is what the Death Star actually is. Here’s his explanation:

Battleships are built of steel because, given sufficient thickness, it has reasonable (though not impervious) resistance to explosive weapons, such as torpedoes or shells from other battleships, and it is possible to build a ship out of that material that will float in the ocean. But rockets and satellites (a Death Star would be the latter) have never been built from steel, because its strength-to-weight ratio is far too low — a steel rocket, if it could get into orbit at all, would have very poor payload performance, and a steel satellite would be far too heavy to be able to lift affordably.

Simberg adds that the better material would be a carbon exterior, with aluminum or a composite material interior. The cost of those materials are lower because they’re more readily -- especially since most of them are readily available in space, which would cut the cost of shipping from Earth down, too. So why didn’t the White House come up with that number? “Among the people doing the estimating, only one has any experience in aerospace engineering (and probably none in costing of such projects).”

Still, using the Death Star to illustrate financial engineering principles isn’t a bad idea. It makes esoteric material accessible to people who may not otherwise be interested in it. Besides, economics can’t explain everything. Nobel Prize-winning economist Paul Krugman tells us why: