For the First Time Ever, Scientists Show That Eating Pasta Makes Women Skinny

A new Italian study shows that women who eat pasta are skinnier. But there's more to the research than that. 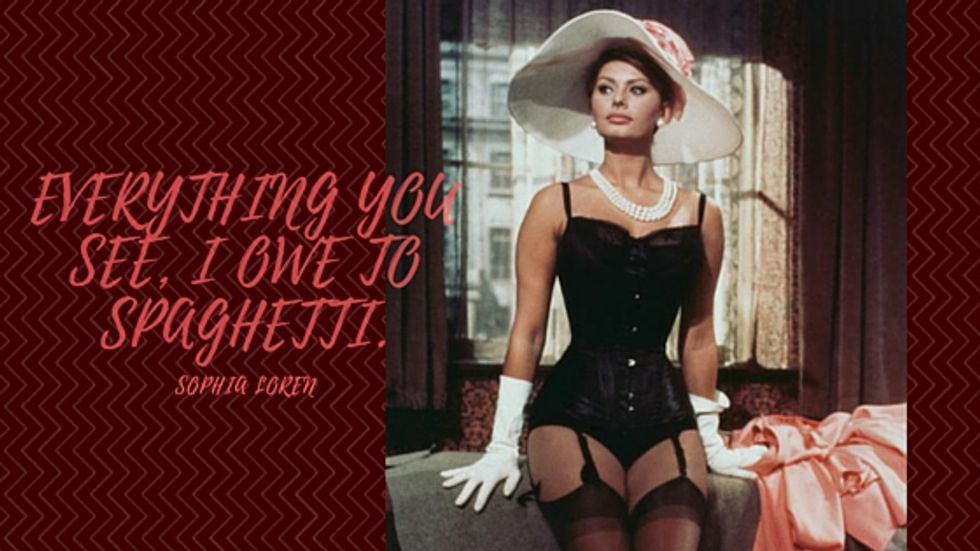 Sophia Loren was one of the most beautiful women to ever grace the silver screen -- and credited her figure to pasta. A new Italian study agrees with her, citing pasta as helping women maintain a slim waistline.

In a study published in Nature’s Nutrition and Diabetes Journal, researchers from the IRCCS Istituto Neurologico Mediterraneo Neuromed in Pozzilli Italy looked at pasta’s effects on health when consumed as part of the typical Mediterranean diet: olive oil, nuts, fruits and vegetables, moderate amounts of fish and poultry, and small amounts of dairy, red and processed meats, and sugary sweets. That diet has shown many health benefits, including “primary and secondary prevention of chronic diseases since the mid [19]50s,” according to the study.

This is the first study to look at pasta in terms of its effect on body weight. Given that Italy has spent decades trying to promote that traditional diet instead of the low carb/high protein/sugar laden one Italians are copying from Americans, the researchers were hoping this study would offer major health benefits.

For three years, researchers surveyed the eating habits of both participant groups during random weekdays and weekends (except for major holidays). They also tracked participants’ weight, height, waist and hip circumferences. The Molise results were recorded via in-person interviews and examinations. The INHES results were recorded via a detailed telephone survey 24 hours after participants had eaten. Results were then modeled via statistical analysis, including multiple approaches in dietary analysis. “We used both 'energy residual methodology' and residual methodology for correcting pasta intake for body weight of the subjects,” the study authors write. That method helped them correct for discrepancies, giving them the least-biased data possible.

So what were the results? After crunching all the data, the researchers came to a surprising conclusion: “As a traditional component of MeD [the typical Mediterranean diet], pasta consumption was negatively associated with BMI [Body Mass Index], waist circumference and waist-to-hip ratio and with a lower prevalence of overweight and obesity.” That “negative association” means that as people ate more pasta, their BMI went down -- as in, they had a slimmer waist and overall appearance. The researchers explain:

The association of pasta intake as grams per day with BMI from positive became negative after stratification for the body weight of the subjects. Standardized residuals were predicted in both datasets, using linear regression analysis with main outcome pasta intake (grams per day) and independent variable body weight (kg).

The other major benefit to higher pasta intake was “better adhesion to MeD in both genders,” which highlights the importance of the Mediterranean diet as a whole rather than just the pasta portion of it.

So does this information refute the current trend of gluten-free foods in the American diet? Not even a little, as the rest of the study’s results were decidedly un-pasta friendly. For starters, only women received the negative BMI correlation after eating pasta; men experienced absolutely no benefit.

Eating too much pasta affected both men and women. Recipients who ate any amount greater than the 1 cup of cooked pasta per serving ratio experienced “higher waist and hip circumferences and waist-to-hip ratios,” according to the study. In fact, there was an overall “negative association of pasta consumption with general and central obesity” for both groups. The Molise participants were heavier overall as “pasta-body weight residuals were significantly and negatively associated with waist and hip circumference and waist-to-hip ratios.”

While the study showed that pasta can help women maintain a slimmer waist, the benefits are most likely attributed to the overall traditional Mediterranean diet. The combination of whole foods, plus the smaller pasta serving serving size, are a literal recipe for good health. However, the INHES results were partially funded by pasta company Barilla, so take them with a grain of salt.

Does that mean that gluten-free foods are actually better for you? Also no: most people who think they have a Celiac disease or a gluten allergy actually don’t, according to a 2013 double-blind cross-over study in Gastroenterology. They may have a sensitivity to gluten, but there was no trace of gluten having actually caused any of the symptoms associated with it. Here’s Dr. Aaron Carroll’s 8-minute dissection of the research: