Truth is, dinosaurs aren’t as distinct as you may think, but to find out why, we first have to consider how we got the term “dinosaur.” 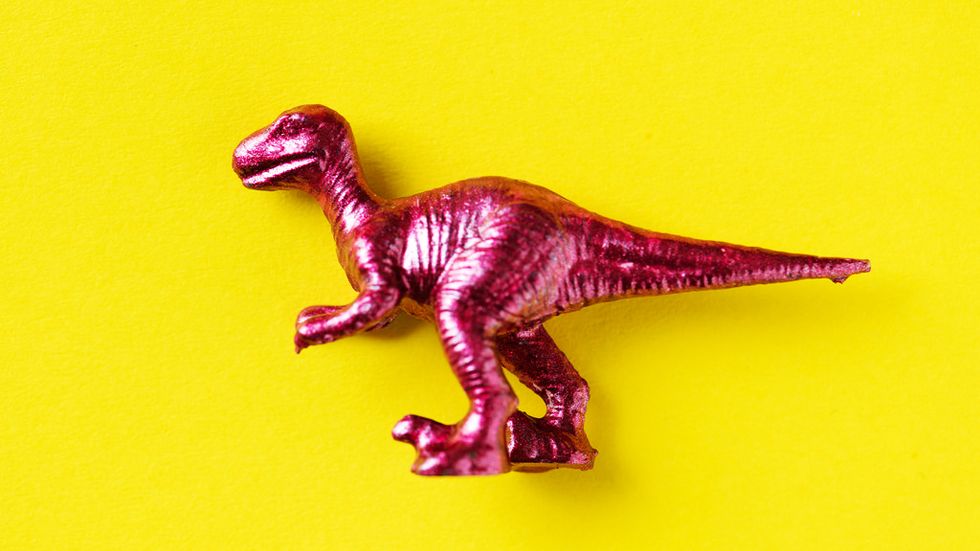 Imagine you traveled back in time some 280 million years ago. Gazing out the portside window of your time-ship/DeLorean/phone-booth, you spy a large, reptilian creature among the reeds at the river’s edge. You estimate it’s 11 feet long, from snout to tail. It has a scrunched crocodilian-like mouth filled with the sharp, jagged teeth of a carnivore. It stands on squat legs and wears an eye-catching sail on its back, perhaps to soak up sunny rays to warm its cold blood.

How would you classify this creature? Given the era, its reptilian appearance, and its size, most people would call it a dinosaur, but they would be wrong. What you’ve stumbled across is a dimetrodon, a therapsid, and it belongs to a group of reptiles that are the ancient ancestors of mammals.1

But it’s understandable why people would make this classification. Pop culture has primed us to view any animal that’s large, reptilian, and went extinct millions of years ago as a dinosaur. Consider Pteranodons. These flying reptiles have terrorized Jurassic World and own lifetime tickets aboard the Dinosaur Train, but they are members of the order Pterosauria, not Dinosauria.

So, what makes a dinosaur a dinosaur? What characteristics connect genus as varied as Triceratops, Diplodocus, and Tyrannosaurus rex (all true dinosaurs) into a single clade? Truth is, dinosaurs aren’t as distinct as you may think, but to find out why, we first have to consider how we got the term “dinosaur.”

A (brief) history of discovery

From the Greeks to Native Americans to prehistoric tribes, people all over the world have recognized dinosaur fossils as unique well before science gave them a name.2 In fact, Western society likely stumbled across evidence for these Mesozoic beasts for centuries before anyone bothered to take notice.

In America, for example, the Lewis and Clark expedition traveled through what is today Hell Creek Formation, Montana, known as the “paleontologist’s dream” for its bountiful fossilized specimens literally sticking out of the rock. In 1818, a farm boy with the glorious name of Plinus Moody found fossil footprints in a Massachusetts rock ledge. These led to the discovery of Anchisaurus bones, but no one recognized them as significant at the time.3

With America wasting several chances to “discover the first dinosaur,” the honor ultimately went to William Buckland, a professor of geology at Oxford University. More specifically, Buckland was the first person to correctly identify a set of bones as belonging to an extinct, large carnivorous lizard. He called the species Megalosaurus in 1824, the first dinosaur to be named.

The British paleontological hunt was on. Thanks to Buckland, scientists now knew what to look for and past discoveries could be reevaluated.

Geologist Gideon Mantell and his wife, May Ann Mantell, discovered Iguanodon in 1822, but Mantell didn’t publish until 1825, making theirs the second named dinosaur. Between 1809 and 1811, a girl named Mary Anning and her family discovered Ichthyosaurus (not technically a dinosaur, but Mary Anning’s story is too cool to not give a shout out). Then in 1833, Gideon Mantell discovered Hylaeosaurus.

Jumping forward about a decade, biologist Sir Richard Own compared the bones of Megalosaurus, Iguanodon, and Hylaeosaurus. He found that these creatures shared features with each other but no other known animal, such as upright legs tucked beneath their bodies and five vertebrae connected to the pelvis.5 In 1842, he named the taxon Dinosauria, or “fearfully great reptiles.”

Of course, paleontologists have discovered hundreds of dinosaurs since Sir Owen’s founding trio, and with these discoveries, our definition of what is or is not a dinosaur has been refined. For example, as ScienceNews points out, dinosaurs used to exhibit several unique features, including:

However, most dinosaur-specific features were eventually found in non-dinosaur creatures. All save one: that complete hole in the hip socket. This feature, and this feature alone, is ultimately what defines a dinosaur. The reason Dimetrodon, Pteranodon, and Ichthyosaurus aren’t card-carrying dinosaurs is because they lack this feature.

This complete hole allowed dinosaurs to position their legs under their bodies (as Sir Owen noted), which separates dinosaurs from lizards, whose hips force their legs to jut out from the side. Dinosaur pelvises further divide them into two groups: Saurischia (lizard-hipped) and Ornithischia (bird-hipped).6

This updated definition leads to an interesting—if counterintuitive—conclusion: Dinosaurs are not extinct. Not technically. Phylogenetically speaking, birds are the descendants of dinosaurs, and since they continue to thrive, the clade as not been rendered extinct. Today, a scientist may refer to traditional dinosaurs as “non-avian dinosaurs” and birds as “avian dinosaurs.”7

This means your family’s Thanksgiving turkey is actually a distant relative of the Tyrannosaurus rex. How the mighty have fallen.

History in the making

As new fossils and information amass, paleontologists will continue to revise our understanding of dinosaurs. Spinosaurus was originally thought to be a terrestrial carnivore, but thanks to the latest computer models, scientists now believe it was an aquatic hunter. A recent study flirted with the idea that Tyrannosaurus rex sported decadent plumage, while another study challenged the notion.

Even the dinosaur family tree is up for debate. A new hypothesis restructured the phylogenetic relationships of Dinosauria, suggesting that ornithischians and therapods are closer related than sauropods. If evidence bears this view out, it would mean rewriting a lot of textbooks.

While one study or hypothesis does not a scientific consensus make, these examples show us how new ideas and information will continuously require us to revise and redefine what makes a dinosaur. Years from now, the answer to our question may be entirely different.

But for now, if you can remember that the hip bone connects from the thigh bone, then you know what makes a dinosaur a dinosaur. 5. “New fossils are redefining what makes a dinosaur.” Carolyn Gramling. ScienceNews. Retrieved on July 19, from https://www.sciencenews.org/article/new-fossils-are-redefining-what-makes-dinosaur.

6. “What makes a dinosaur a dinosaur?” Luis Villazon. Science Focus. Retrieved on July 19, from http://www.sciencefocus.com/article/nature/what-makes-a-dinosaur-a-dinosaur.

7. “The Dinosauria.” University of California Museum of Paleontology website. Retrieved on July 19, from http://www.ucmp.berkeley.edu/diapsids/dinosaur.html.