There’s a standard paleontological story we tell, and it goes like this: When animals first emerged from their watery genesis to walk on land, they found a world of lush, edible vegetation. Over the course of a few hundred million years (and lots of eating), these animals grew larger and larger until they reached their terrible apex — the dinosaur. These gigantic beasts then dominated the globe.

Flying pterodactyls, sometimes up to ten meters in wingspan, swept up whatever they wanted. Stomping tyrannosaurs would gulp down human-sized prey as an appetizer. A single herbivorous diplodocus might strip a tree clean in a day. Needless to say, a world swarming with terrible lizards left little room for mammals, especially Homo sapiens, to come about.

So, thank heavens for… the heavens. Our salvation came from outer space: the asteroid. Or maybe it was a meteor. Or a comet. Whatever it was, a magnificent and colossal cosmic gift hit the earth in modern day Mexico, throwing the climate and environment into chaos, leading to the extinction of the dinosaurs. Then, like a phoenix arising from the ashes, warm-blooded critters emerged from the debris, and the Age of Mammals was born.

It’s one of the greatest “what if” stories in all of science. What if the asteroid never hit? Would the dinosaurs still be alive? (And, as a consequence, would we be here?) A new paper argues that dinosaurs were headed to the dustbin of history well before the asteroid came.

Before humans dominated the planet, species were rarely hunted or killed to extinction by other species. What mostly happened is that organisms died out because they couldn’t eat enough.

This could happen in one of two ways: (1) the environment in which a species lives becomes so drastically different that it can no longer find sustenance there, or (2) a rival species comes to dominate the environment, forcing them out. Scientists believe that both were happening to the dinosaurs before the fateful asteroid.

Though the asteroid may have served as a deus ex machina for mammals, it is quite likely that the dinosaurs were doomed anyway.

The arrival of the asteroid 66 million years ago triggered the mass extinction of non-avian (non-bird) dinosaurs, ending the Cretaceous period. The conventional wisdom was that dinosaurs were going strong up until that point. Fossil records depicted a rich variety of species and a diversity suited to a complex food chain. But a recent article thinks that this might not be the whole story. Indeed, it argues that dinosaurs were already in decline for 10 million years.

Before any asteroid hit the earth, the late Cretaceous period witnessed radical change. The earth’s climate has always oscillated between cooler and warmer periods, and it appears that in the millions of years before the dinosaurs went extinct, it was cooling rapidly. (Well, rapidly in geologic terms.) Most of this period had been comparatively warm, with volcanic activity creating greenhouse gases that raised temperatures. But then the earth began cooling.

The late-Cretaceous period was great for hadrosaurs, but most other species of dinosaur were likely on the road to extinction already.

This hit dinosaurs pretty hard. Dinosaurs likely had poor thermoregulatory controls (being “mesothermic,” a halfway point between cold- and warm-blooded), which meant that they relied in part on external temperatures to keep their bodies warm enough to function properly. If the temperature did drop as scientists now think, the larger dinosaurs especially would have had no way to regulate their temperature and would have gradually weakened and died.

It is even speculated that the late-Cretaceous period might have resembled a prehistoric Children of Men. Dinosaurs may have controlled the sex of their offspring by the use of temperature, just as crocodiles and turtles do today. If global temperature is dropping, such temperature-dependent sex regulation becomes difficult if not impossible. 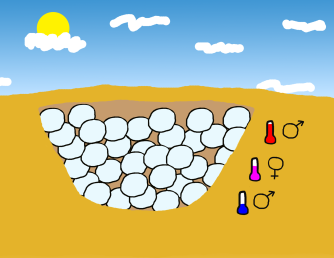 Of course, climate change also would affect vegetation and food availability. The fossil record shows that just before the extinction event, tropical vegetation was giving way to woodland plants. Such a change in flora would mean that a very particular subgroup of dinosaurs would flourish, at the expense of others. And the ones who were predominantly the winners in this were the “hadrosaurs”.

Hadrosaurs are basically very large herbivores, and they took to this new environment with gluttonous glee. But, food chains are incredibly complex, and hadrosaurs played a crucial role. Out-eating and out-competing other herbivores, like the triceratops, meant that not only did triceratops die out but so did their carnivorous predators, like tyrannosaurs. No species is an island, and the presence or absence of a keystone species can cause the entire network to break down.

In short, changing climate meant changing vegetation, which in turn caused chaos in the very complicated and sensitive food web. The late-Cretaceous period was great for hadrosaurs, but most other species of dinosaur were likely on the road to extinction already.

None of this is to necessarily say that our familiar paleontological story is nonsense. Geological history is subject to debate and revision. And, even if we accept the dinosaurs were in decline before the asteroid hit, that doesn’t detract from the transformative and stark ecological change brought about by a space rock.

The meteorite did cause non-bird dinosaurs to go extinct, but perhaps it wasn’t necessary. There have been five major mass extinctions in Earth’s history, and the dinosaur-killing asteroid is only one (and it wasn’t even the biggest). Many others were caused by geological activity and climate change. Though the asteroid may have served as a deus ex machina for mammals, it is quite likely that the dinosaurs were doomed anyway.

The Copernican principle states that Earth is an ordinary planet, but that does not mean that life is ordinary in the universe.
Starts With A Bang

Even with all the recent impacts we've seen, it might be more "foe" than "friend" to us.
Strange Maps

All of these conflicts have a long history. They may also have a long future.
Up Next
The Present

Technology usually has more pros than cons, but every benefit still carries some risk.