An interdisciplinary team of scientists has confirmed for the first time that dinosaurs suffered from cancer.

The team made the discovery after reanalyzing a 76-million-year-old fibula, or lower leg bone, that belonged to a Centrosaurus apertus, a four-legged dinosaur that was as tall as a human and about 18 feet long. Paleontologists first discovered the fossilized fibula in 1989, in Alberta, Canada. They observed that the bone was damaged, but assumed it was due to a healing fracture.

After seeing the fossil at the Royal Tyrrell Museum of Paleontology in Alberta in 2017, David Evans, the James and Louise Temerty endowed chair of vertebrate paleontology at the Royal Ontario Museum, and his colleagues suspected the damage was caused by a malignant tumor.

“The cancerous bone is severely malformed, with a massive gnarly tumor larger than an apple in the middle of the bone,” Evans told Gizmodo. “In fact, the top half of the bone is missing, and it may have broken in life due [to] the progress of the cancer.” 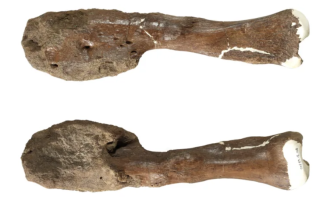 In the recent study, the team used a combination of techniques to analyze the fibula, including taking CT scans, casting the bone and studying thin slices of it under a microscope. The analysis suggested that the dinosaur likely suffered from osteosarcoma, a type of bone cancer that affects modern humans, typically young adults.

For further evidence, the team compared the damaged fibula to a healthy fibula from a dinosaur of the same species, and also to a fibula that belonged to a 19-year-old human who suffered from osteosarcoma. Both comparisons supported the osteosarcoma diagnosis. 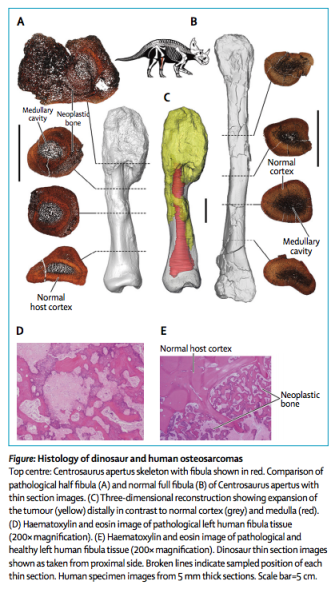 “The shin bone shows aggressive cancer at an advanced stage,” Evans said in a press release. “The cancer would have had crippling effects on the individual and made it very vulnerable to the formidable tyrannosaur predators of the time.”

“The fact that this plant-eating dinosaur lived in a large, protective herd may have allowed it to survive longer than it normally would have with such a devastating disease.”

The fossilized fibula was originally unearthed in a bonebed alongside the remains of dozens of other Centrosaurus apertus, suggesting the dinosaur didn’t die from cancer, but from a flood that swept it away with its herd. 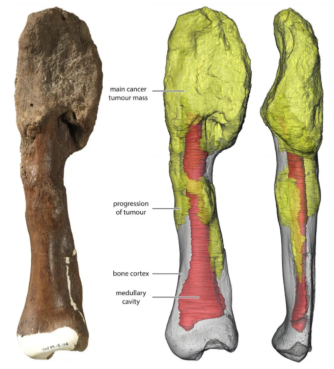 The new study highlights how modern techniques can help scientists learn more about the evolutionary origins of modern diseases, like cancer. It also shows that dinosaurs suffered through some of the same terrestrial afflictions humans face today.

“Dinosaurs can seem like mythical creatures, but they were living, breathing animals that suffered through horrible injuries and diseases,” Evans said, “and this discovery certainly makes them more real and helps bring them to life in that respect.”

Was our distant ancestor a biped or not – i.e., human or not human?
Up Next
The Present