Despite being extinct for 65 million years, dinosaurs continue to evolve in our imaginations. Over the past two hundred years of research, these once terrible lizards have added a panoply of new adaptations, from brightly colored feathers to a syrinx more appropriate for mate-attracting honks than movie-monster roars.

But new Spinosaurus aegyptiacus fossils excavated in the Kem Kem region of the Moroccan Sahara may have rewritten those rules and our understanding of the Mesozoic world. 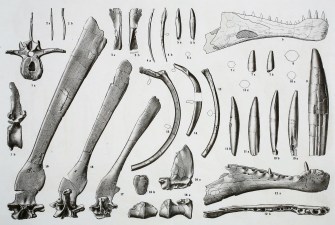 Unearthing a mystery in the desert

Spinosaurus was a Cretaceous period therapod, a clade of dinosaurs that include Velociraptor, Dilophosaurus, Giganotosaurus, and of course, Tyrannosaurus rex. At nearly 40-feet long and weighing an estimated 6 tons, Spinosaurus is one of the largest predatory dinosaurs ever discovered, yet many of its characteristics have confounded paleontologists for decades.

The first Spinosaurus fossils were discovered in 1912 by Ernst Freiherr Stromer von Reichenbach, a paleontologist and German aristocrat. Stromer’s specimen mainly consisted of jaw fragments and neural spines, but that proved enough to convince him of his discovery’s peculiarities.

Unlike T. rex’s stout, powerful jaw, Spinosaurus had a slender yard-long snout more akin to a crocodile’s. Its conical teeth were ill-suited to shearing and tearing like other therapods’ serrated teeth; they were a better match for snapping the fish out of water. Then there was that characteristic spine sail.

Unfortunately, Spinosaurus would remain elusive to Stromer as his original specimen was destroyed in the Allied bombing raids on Munich. Over the decades, however, paleontologists would keep trying to solve the puzzle of Stromer’s weird dinosaur.

An illustration of a Spinosaurus skeleton with its thinner, more traditionally therapod-like tail.

And Spinosaurus kept getting weirder. In addition to the back-sail and elongated jaw, further fossil discoveries elucidated a dinosaur that was incredibly front-heavy with dense bones and short back legs not tailored for running.

“I tried to see all the bones, the muscles, the connective tissue, everything,” Nizar Ibrahim, a paleontologist at the University of Detroit Mercy, told National Geographic. “Sometimes it was there for an instant, then it vanished, like a mirage. My brain couldn’t quite compute all that complexity.”

As reported in National Geographic, Ibrahim teamed up with Simone Magnuco at the Milan Museum and University of Chicago fossil preparator Tyler Keilor in 2014 to digitally resurrect Spinosaurus.

The team used a CT scanner to reconstruct Spinosaurus bones within a computer, including some unearthed by Ibrahim in Morocco. They rounded out their skeleton by assembling missing bones from images of museum specimens, Stromer’s original photographs and sketches, and those from other therapod specimens.

When they saw Spinosaurus walk across its digital landscape, they realized the animal was better attuned for an amphibious lifestyle than a terrestrial one. It had nostrils at the tip of its snout. Its bones were dense like aquatic mammals, and its hind legs would not have been such a hindrance if submerged in buoyant hunting grounds.

Their hypothesis also fits with what we know about Spinosaurus’s habitat. Today, the Sahara is one of the driest places on Earth, but in the Cretaceous period, vast waterways covered the land and sported giant fish to outsize the most unbelievable of fish stories. (Seriously though, they were this big.)

A swimming dinosaur: The tail of Spinosaurus

A study of lost tails

But something was missing: a means of propulsion. How did a giant like Spinosaurus catch slick and quick prey while paddling like a duck on two stumpy hind legs? It didn’t add up.

“The big thing we were missing was a propulsive structure because you can’t really be an aquatic predator unless you have some way to catch prey in the water and move through the water,” Ibrahim told Nature. “That’s what we now found.”

Between 2015 and 2019, on a grant from the National Geographic Society, Ibrahim and his team traveled to the Kem Kem region of the Moroccan Sahara to unearth further Spinosaurus fossils. During their dig, they discovered Spinosaurus tail vertebrae that were “characterized by extremely long spines.”

Ibrahim’s previous reconstruction of Spinosaurus featured a thin tail borrowed from other therapods. But such a tail would make traveling through the water unwieldy—think paddling a canoe with a walking stick. The new vertebrae revealed a fin-like tail, similar in appearance to a newt’s, and could more easily propel the dinosaur through the water.

To test his hypothesis, Ibrahim’s colleagues at Harvard crafted plastic models of the Spinosaurus tail. They attached it to a robot system that mimics swimming and measured its thrust and efficiency. They then compared the Spinosaurus tail’s performance against two other therapod tails and extant aquatic animals.

Spinosaurus’s results were consistent with the aquatic animals and superior to the terrestrial therapods. Ibrahim and his team published their results in Nature.

“This discovery is the nail in the coffin for the idea that non-avian dinosaurs never invaded the aquatic realm,” Ibrahim said in a release. “This dinosaur was actively pursuing prey in the water column, not just standing in shallow waters waiting for fish to swim by. It probably spent most of its life in the water.”

But as is the case in science, not everyone is yet convinced.

Donald M. Henderson, the curator of dinosaurs at the Royal Tyrrell Museum, believes Spinosaurus likely lived at the water’s edge, scooping up fish as they swam by. As he told the New York Times, he does not believe Spinosaurus would be a powerful swimmer.

“My first thing is, they haven’t actually demonstrated that this tail could produce enough force to propel a six-and-a-half-ton body through the water,” Henderson said. He added that the researchers had yet to provide that Spinosaurus had enough muscle power to move such a tail or compensate for the drag of its sail.

As new fossils are found and new ideas to test emerge, we’ll see if Henderson’s concerns capsize the aquatic hypothesis or not.

Even if Spinosaurus is thrown out of the pool, that doesn’t mean dinosaurs will forever remain grounded. As reported by the New York Times, a dinosaur fossil called Halszkaraptor escuilliei has features that suggest a partial aquatic lifestyle. These include “a neck like a swan, a snout like a goose, and forelimbs like flippers,” but the specimen is so unusual that its authenticity remains a matter of debate.

Visiting even one friend can undo all the good work that social distancing has accomplished.Over the past few months, people all over the world have come to realize just how […]