Despite how many of them you can find at a museum, fossils are comparatively rare. They can only form when a plant or animal dies under certain conditions, and without them the remains are typically lost to time. These limitations mean that fossils depicting ancient creatures doing things (like fighting) are extremely difficult to find and are all the more important when discovered.

A new fossil showing a dinosaur’s behavior has recently been discovered in Ganzhou, China giving insights into how the oviraptor tended to its eggs and perhaps even shedding light on its development. 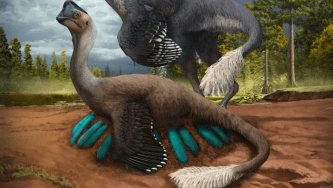 The fossil depicts a large dinosaur sitting on a clutch of at least 24 eggs in a manner not unlike that of a bird. At least seven of the eggs contain fossilized embryos with the skeletons of the unhatched oviraptor. The apparently late level of development of these eggs combined with the lack of sediment between the bones and the eggs suggests that the oviraptor may have been incubating its nest when it died.

“Dinosaurs preserved on their nests are rare, and so are fossil embryos. This is the first time a non-avian dinosaur has been found, sitting on a nest of eggs that preserve embryos, in a single spectacular specimen,” explains lead author Dr. Shundong Bi.

Co-author Dr. Matthew Lamanna also commented on how rare and exciting this find is:

“This kind of discovery, in essence fossilized behavior, is the rarest of the rare in dinosaurs. Though a few adult oviraptorids have been found on nests of their eggs before, no embryos have ever been found inside those eggs. In the new specimen, the babies were almost ready to hatch, which tells us beyond a doubt that this oviraptorid had tended its nest for quite a long time. This dinosaur was a caring parent that ultimately gave its life while nurturing its young.” 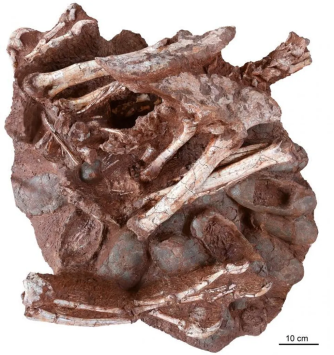 The fossil in question, notice the open sections of the blue green eggs.Credit: Shundong Bi

While this small pile of bones may not look impressive to you, it is a proverbial goldmine of information for paleontologists, shedding light on dinosaur behavior in ways that other fossils can’t come close to.

The parent—it is not currently known if it was male or female—clearly had gastroliths, also called “stomach stones,” in its abdominal region. Commonly consumed by animals to help grind foods they cannot fully process with their teeth, this find adds the oviraptor to the list of dinosaurs that used these stones as part of their digestion.

The different development levels seen in the fossilized embryos imply that the eggs might not all have hatched at the same time. This is a known occurrence for some birds, but before now, it was thought that this evolutionary development occurred too late for any dinosaur nest to feature it.

The researchers also examined oxygen isotopes in the remains and discovered that the eggs must have been kept at high temperatures typical of the incubation process. This further suggests that the parent was incubating the eggs as a bird does and keeping them at a necessary temperature rather than merely protecting them from an external threat, as a crocodile does.

While finding a dinosaur sitting on some eggs might not be the most exciting example of an activity-depicting fossil there is, the information that scientists can gather from it on the birth, life, and potentially the death of these animals will make this find an important one for years to come.

More than 90% of human faces are home to mites that live in our skin pores. These friendly guests might be merging with us.
Up Next
Neuropsych

Smells connect to memories more than other senses