Researchers have uncovered what the facial features of a baby titanosaurus looked like in the first-ever discovery of an almost completely intact embryonic titanosaurian sauropod skull. 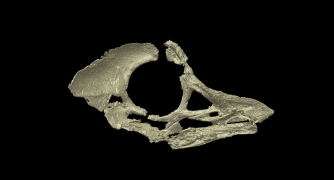 About 20 years ago, a dinosaur egg was illegally smuggled into the United States from Argentina. Unbeknownst to the egg-runner, it contained one of the most exquisitely preserved skulls of a dinosaur embryo ever found. (The egg has since been returned to Argentina.)

“The preservation of embryonic dinosaurs preserved inside their eggs is extremely rare,” said John Nudds, study co-author and palaeontology professor at The University of Manchester, in a statement. “Imagine the huge sauropods from ‘Jurassic Park’ and consider that the tiny skulls of their babies, still inside their eggs, are just a couple of centimetres long.”

The embryo comes from a group of dinosaurs named titanosaurian sauropods, who are known for their long necks and tails, and tiny heads. While their species also lay claim on the largest terrestrial animal ever known to have existed, they start off small enough to fit inside an egg roughly the size of that of an ostrich. The uncovered titanosaur skull is about the size of a table grape.

Understanding the species origins may give scientists a better idea of how they grew and developed. But the task hasn’t been easy. Twenty-five years ago researchers struck a bonanza when they uncovered a Cretaceous-era nesting ground of these dinosaurs in Patagonia — a site where titanosaurian sauropods once laid their eggs 80 million years ago. But unfortunately, the eggs the researchers found in the area were flattened, thus lacking key information only a 3 dimensional skull could give them.

This latest finding, detailed in a paper published last week in the journal Current Biology, is 3-D enough to contain all those revealing details. Including the befuddling facial features that titanosaur babies apparently wore in their first days of life. 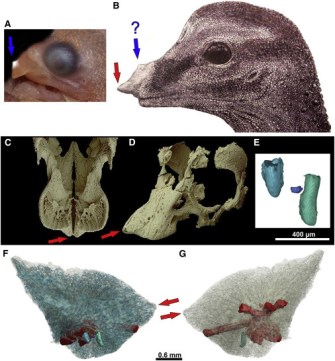 The research team used synchrotron microtomography, a cutting edge imaging technology, to view the embryo’s bones, teeth, and soft tissues, like the calcified remains of the baby’s brain case and jaw muscles.

While the prehistoric long-necked beasts have always been depicted in their adult forms, the high tech images reveal that the babies actually had some unusual physical traits. They had binocularly focused vision in the front of the head rather than on each side, retracted openings on their snout, and a single horn in the front of their head. The researchers have speculated that the horn may have helped them crack out of their shell at birth and assisted these vulnerable newborns in defending themselves. There is currently no evidence of parental care in this dinosaur species, so the baby titanosaurus would have likely been fending for itself for food and protection.

“You could call it a unicorn baby dinosaur, because it has a single horn on its head. But unlike the mythical unicorn, where the horn is on the forehead, this dinosaur has a small bumpy horn at the tip of its snout,” University of Edinburgh vertebrate paleontologist Stephen Brusatte, who wasn’t involved in the new study, told the New York Times. “This little embryo is one of the cutest dinosaurs I’ve seen, and at the same time, one of the weirdest looking.”

As the dinosaur matured, its head and face would have morphed into the features we imagine them as today; their vision likely changed as their eyes shifted laterally to the sides of the head. Their snout and face may have grown faster than their braincase to get rid of the horn. This is all speculation, of course, as more examples are needed.

“We expect that the specimen will become one of the most important fossils in the study of reproduction and development of the gigantic quadrupedal dinosaurs,” said Martin Kundrát in an email to CNN, study author and head of the PaleoBioImaging Lab at Pavol Jozef Šafárik University in Slovakia.

Though the researchers acknowledge that it is possible that they stumbled upon an entirely new species, the embryo is the most similar to Tapuiasaurus — a titanosaurus dinosaur that lived in Brazil between 66 million and 100.5 million years ago.

There were many other species of human on the planet. Svante Pääbo discovered one of them.
Up Next
Strange Maps