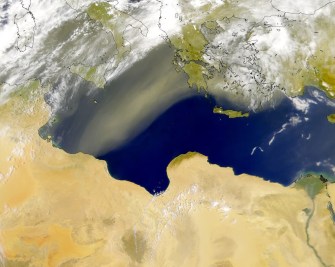 Satellite picture showing a scirocco blowing desert dust across the sea from Libya to southern Europe. Most of the irregular migration into Europe takes place across this part of the Mediterranean, either from North Africa to Italy or from Turkey to Greece.Image: NASA, public domain

One map can say more than a thousand words. That’s why we shouldn’t believe all they’re telling us. See, maps have a problem. They appear neutral, objective, authoritative. But that’s exactly all that they’re not. Each map reflects the many choices the cartographer has made, consciously or not, both in terms of content and form.

And so, without us even noticing it, maps can confirm bias, entrench prejudice and perpetuate injustice. Take for instance the topic of migration, guaranteed to raise the volume of the after-dinner conversation at any party. In a recent article, Dutch news website De Correspondent argues that the cartographic depiction of migrant flows into Europe reinforces the negative attitudes many Europeans have towards migrants. 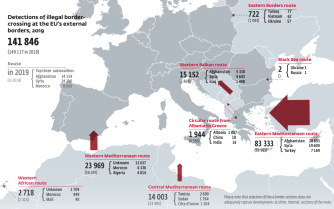 Here’s a map taken from the 2020 annual report by Frontex, the European Border and Coast Guard Agency, showing the illegal border crossings into the EU for 2019. As part of the official report on illegal immigration, this map is the source of many others in the European media.

While it may seem nothing more or less than a factually correct cartographic representation of objective data contained in the report, De Correspondent argues that there are several things wrong with this image.

This all serves to affirm certain preconceptions about migration into Europe: the continent is being flooded by a huge influx of hostile aliens. “It’s no coincidence that political parties opposed to migration use maps like these in their communication,” the article states.

The blue map tries to confer the same information as the red one, without confirming the underlying biases.Image: De Correspondent, reproduced with kind permission.

Can maps confer the same information without confirming those biases? De Correspondent took the Frontex map and translated it into its own house style; and then produced a kinder, gentler alternative:

While the ‘blue’ map at least makes an active effort not to walk into the same bias-confirming trap that the ‘red’ one does, it still tells only part of the story. No mention is made of the conflicts that motivate migrants to risk their lives in journeying to Europe – nor indeed of the many lives lost along those routes. 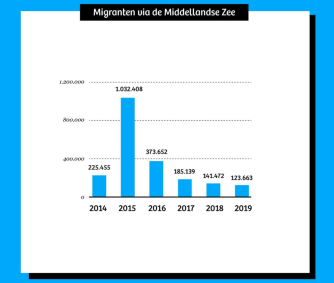 Number of migrants reaching Europe via the Mediterranean. The numbers have been declining since 2015. Image: De Correspondent, reproduced with kind permission.

Perhaps a map is not the right way at all to present information on migration, De Correspondent argues. Here’s another illustration: a simple bar chart, showing the number of irregular border crossings for each of the preceding six years. Following the dramatic refugee influx of 2015, that number has gone down significantly and consistently for each of the following years.

This offers a radically different perspective on the same reality – and one less likely to be reproduced by anti-immigration parties.

For more background (and more maps), see the original article at De Correspondent (in Dutch), which was based on an article in the journal Mobilities: The migration map trap. On the invasion arrows in the cartography of migration (in English).

A 2020 study has revived a longstanding controversy over Christopher Columbus’ claims of marauding cannibals in the Caribbean.
Strange Maps

In Louisiana, high school starts at 7:30 am. Research shows that is at least an hour too early.
Up Next
Starts With A Bang

How Scientists Will Break The Record For Most Distant Galaxy Ever

NASA’s James Webb Space Telescope will truly usher in a new era of astronomy.If you want to find the very first galaxy of all, you have to understand not only […]