The newly-discovered species, the first such find in the last 50 years, shares a lineage with the fearsome T.rex, which came about 11 million years later. Thanatotheristes degrootorum, whose name translates ominously as the “reaper of death,” had the length of two cars and the height of about 2.4 meters. It lived during the Cretaceous period, when it prayed on herbivorous beasts like the horned dinosaur Xenoceratops and Colepiocephale, who head is shaped like a dome. Remains of these two species were also found at the same fossil site called the Foremost Formation. Millions of years ago it was a plain with swamps on the coast of the Western Interior Seaway, an inland sea that stretched from the Arctic Ocean to the Gulf of Mexico. 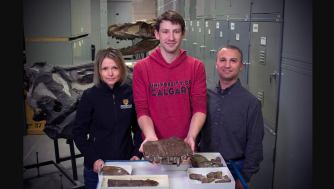 “This animal would have absolutely been an imposing creature in the ecosystem that it lived in and it would very likely have been the apex predator,” Voris explained, adding that “It was really nice to have some sort of name that encapsulated that kind of behaviour.”

The Thanatotheristes was indeed the top predator among the three dinosaur species found in southern Alberta so far. The others were more likely to be herbivores. Professor Zelenitsky called T.rex’s distant cousin as “relatively rare in the ecosystems,” said Professor Zelenitsky,” adding “These were probably only a few per cent of the animals.”

Being mortal makes life so much sweeter.
13.8

Leftover Cold War-era bunkers are still kept in a state of readiness to protect the population from nuclear war.
Up Next
Starts With A Bang

Two of our biggest science-fiction dreams might not remain fiction for much longer. Here’s how 21st-century science could make it real.For as long as human beings have looked up at the […]