Are there aliens in our own backyard?

Scientists have been probing our solar system for extraterrestrial life. 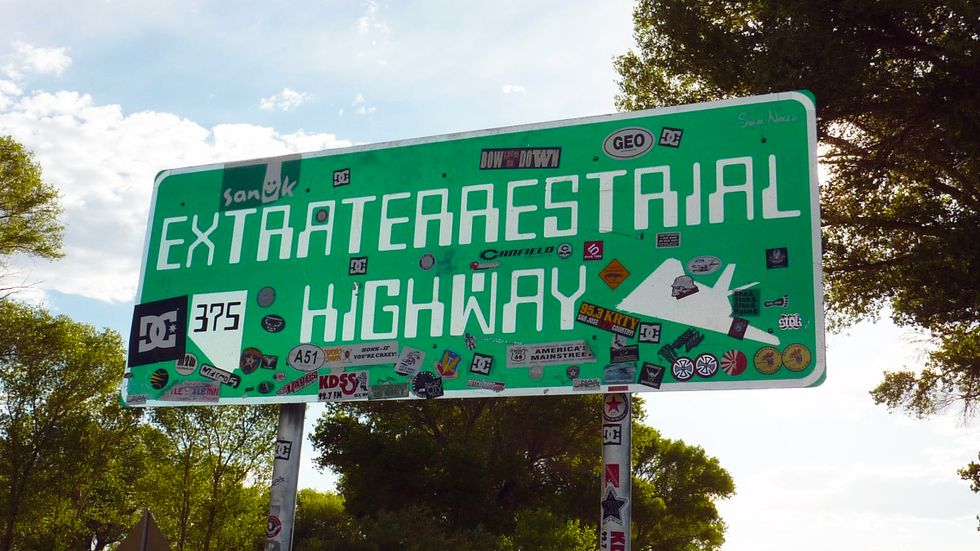 Humanity has long wondered if life exists elsewhere beyond Earth. With the universe being so mind-numbingly vast, the very idea that our tiny, waterlogged rock should alone harbor life seems so…wasteful.

To sate our curiosity, NASA catalogs exoplanets orbiting Milky Way stars to look for potential cradles of extraterrestrial life, such as Kepler-186f, the first validated Earth-size planet orbiting in its star's habitable zone. And the SETI (Search for Extraterrestrial Intelligence) Institute searches space for clues of alien civilizations by, for example, scanning for the residuals of communication technology like narrow-band radio transmissions.

But is it possible we've set our gaze too far to the horizon? Perhaps the greatest chance we have of finding life beyond Earth isn't orbiting some distant star but can be found in our own solar backyard.

What we look for

When looking for suitable habitats for life, astrobiologists search first and foremost for water. Water is the cornerstone of life on Earth. Life needs solvents to perform biochemical processes, and water's title as the universal solvent means that even the simplest of organisms can use it for their molecular interactions.1

Astrobiologists also look for ways energy may enter a system for metabolic processes. On Earth, this form of energy is typically the Sun; however, recent discoveries have led astrobiologists to search for alternative forms, such as geothermal energy.

Finally, they look for other environmental conditions that make life more or less likely: climate, pressure, temperature, atmospheric makeup, and so on.

We should take this moment to make an important distinction. While our solar system may harbor several havens for life, this life will likely not be the intelligent life that SETI searches for. Any neighborly E.T.s we encounter won't be little grey men or green-skinned vixens so much as a small, microscopic, organisms. Think strange, exotic tardigrades. Well, stranger tardigrades.

Ever since Percival Lowel mapped the “canals" of Mars, our ruddy neighbor has been the go-to planet for science fiction writers imagining extraterrestrial life — from H.G. Wells's colonizing Martians to Ray Bradbury's mystical natives3. The canals proved a trick of the eye, and the Mars Science Laboratory Mission's Curiosity rover has yet to find signs of civilization, but that doesn't mean Mars is out of the extraterrestrial running.

Scientists have discovered dark, narrow streaks on the landscape most likely caused by flowing water. These streaks showed traces of hydrated salt, like what occurs after salt contacts water before it evaporates.

Given Mars' dry, barren landscape and lack of atmosphere, how water got there remains a mystery, but the phenomenon points to the possibility of liquid water not trapped in the planet's polar ice caps, providing a potential habitat for microbial life. Should water flow under the planet's surface, any life could even be shielded from the sun's radiation.

Adding to the intrigue, scientists think that water once covered roughly 20 percent of the surface before Mars's atmospheric gases were stripped away, and the water evaporated into space. Scientists have also discovered meteorites from Mars that contained the remnants of organic material — suggesting the rusted planet once contained the ingredients for life.

The surface of Venus, c/o NASA

Like Mars, Venus likely enjoyed Earth-like conditions back in the day. Computer simulations of its early environment suggest the possibility of primordial oceans, moderate temperatures, and a habitable climate.

As David Grinspoon, of the Planetary Science Institute, told New Scientist: “Both planets probably enjoyed warm liquid water oceans in contact with rock and with organic molecules undergoing chemical evolutions in those oceans. As far as we understand at present, those are the requirements for the origin of life."

If early life did form on Venus, most of it probably vanished 715 million years ago, along with those oceans. Today's Venus sports an infernal landscape of volcanic activity, surface temperatures approaching 750 Kelvin, and a thick, noxious atmosphere of carbon dioxide with clouds of sulfuric acid.4,5

But it is that very toxic atmosphere that may have saved Venusian life. According to a paper in the journal Astrobiology, the atmosphere could provide a safe haven for microbial life. Using spectroscopic observations, researchers found “dark patches" in the atmosphere composed of “concentrated sulfuric acid and other unknown light-absorbing particles."

While it is unknown if these patches are organic or not, they do have the same dimension as some Earth bacteria, and researchers think they could be the Venusian equivalent of algae blooms (like those that appear in our lakes and oceans).

The jets of Enceladus, c/o NAS

Moving away from Earth's rocky neighbors, astrobiologists are also considering the possibility that life may exist on the moons of Saturn and Jupiter.

When the Cassini-Huygens spacecraft flew past Saturn's sixth moon, Enceladus, it discovered hydrogen gas in an erupting plume of water.6 The eruption suggested hydrothermal activity may be taking place beneath Enceladus' icy surface. If so, the moon would offer two important ingredients for life — water and energy for metabolic processes.7

Europa's surface is similarly covered in ice, with long streaks of “brown gunk." But beneath that surface, scientist estimate that there could be twice as much water as on Earth. If this Jovian moon also produced hydrothermal activity within that ocean, it too could be a harbor for life.8 A study using computer models has even suggested that Europa may have hydrogen and oxygen in amounts comparable to Earth, even if the moon is lacking in volcanic activity.

NASA is planning to launch a Europa flyby mission in the early 2020s, and the agency's SUBSEA project will be studying hydrothermal environments in the Lō`ihi seamount, off the coast of Hawaii's Big Island, to learn how life can thrive on Earth in conditions similar to those possible on Enceladus and Europa.

Our final candidate is Ceres, a dwarf planet and the largest object orbiting in the asteroid belt between Mars and Jupiter. A spherical clump of rock and ice, Ceres would be an unlikely contender for this list until last year, when NASA's Dawn mission detected organic material on its surface.

Originally, it was thought this organic material covered 6–10 percent of the spectral signature, but a recent analysis of the data suggests the amount of could be as high as 40–50 percent. Since carbon-based compounds are necessary for life, it makes for an exciting discovery that could change how we view objects in the asteroid belt.

With that said, this is a recent discovery and much remains unclear. It is possible the organics weren't created on Ceres but planted there by comets, and even if they are native, organic compounds can come about from non-biological processes.

As Ralph Milliken, a professor at Brown University and one of the study's co-authors said in a press release: “Ceres is clearly a fascinating object, and understanding the story and origin of organics in these spots and elsewhere on Ceres will likely require future missions that can analyze or return samples."

The end of life as we know it

So far, our solar search has focused on the conditions for life as we know it. But what about life as we don't know it?

Bacteria recently discovered in Antarctica can survive off just the hydrogen, carbon monoxide, and carbon dioxide they get from the air. These guys make breatharians look gluttonous by comparison and could lead the way to remove water as a prerequisite in our search for extraterrestrial life.

Additionally, Sara Seager, MIT physics professor, considered that alien life may evolve around different chemical combinations than life on Earth and used computer-generated models to devise a list of those possible combinations.

“The theory ended up being, we should maybe consider all potential molecules that would be in gas form," Seager said. “Why not consider all of them? I just combined them in any way possible, like just taking letters in the alphabet and combining them in all ways."

Could life possibly exist in Titan's methane sea? Or could the seeds of life be floating on some yet undiscovered asteroid? The more we learn about life on Earth, the more we learn about the myriad of paths it has taken to thrive, opening avenues for us to find it in our solar system and beyond. 1. Water: The molecule of life. NASA website. Retrieved on July 5, from https://www.nasa.gov/vision/universe/solarsystem/Water:_Molecule_of_Life.html.

2. NASA dives deep into the search for life. NASA website. Retrieved on July 3, from https://www.nasa.gov/feature/ames/nasa-dives-deep-into-the-search-for-life.

3. The “canali" and the first Martians. NASA website. Retrieved on July 5, from https://www.nasa.gov/audience/forstudents/postsecondary/features/F_Canali_and_First_Martians.html.

7. NASA dives deep into the search for life. NASA website. Retrieved on July 3, from https://www.nasa.gov/feature/ames/nasa-dives-deep-into-the-search-for-life