A Look Back and Forward for Working Women 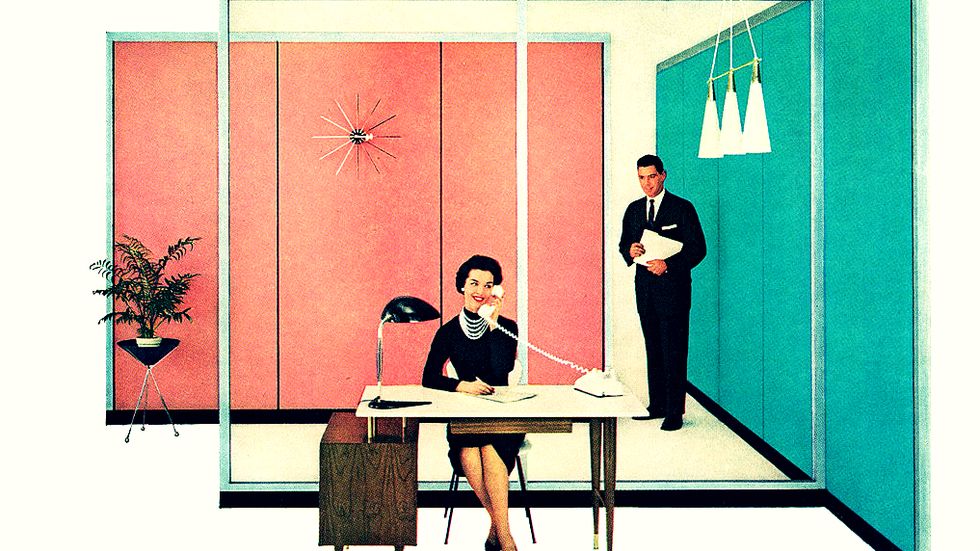 Most young women in the workforce don’t remember firsthand the battles their mothers and grandmothers fought over issues that are still relevant today. Among those who’ve read about them or learned secondhand, many women have taken pains to separate themselves from the purportedly drab, angry feminists with whom they have difficulty identifying.

During the 1980s and 1990s, such disparaging labels as “ball-breakers,” “ice queens,” and “female mafia” were imposed on women who often only sought equal pay and a voice in the proceedings. The so-called “mommy wars” concept caught on in the media focusing on the differences between women working outside the home and those who chose to stay (and work) at home. It was more a headline grabber than an actual reality. Elitist, too, since stagnating purchasing power required most mothers to work. Nevertheless, the “mommy wars” grabbed attention, and the categories it imposed still cause harm today. Let it be said clearly and loudly: just as there are not two types of men, so there are not two types of women.

With all the manufactured anger and derision, is it any wonder that, given a choice, the next generations of women took another, quieter path? Who could blame them? Betty Friedan predicted that would be their choice when she wrote The Second Stage, which addressed the question of how to live the portion of equality that had been won. In the midst of writing The Second Stage, Friedan correctly saw that the future would not be rosy for women. “I sense other victories we thought were won yielding illusory gains,” she wrote. “I see new dimensions to problems we thought were solved.”

There was at that time, however, the promise of young men attending college and getting MBAs alongside women. What their fathers had found unsettling, it was thought, these young men would consider natural. It seemed a reasonable expectation unless you taught (as I did) at a business school where little changed in terms of male-oriented cases, books, and articles. Female professors with tenure were quite rare. Learning, as female students noted, was one-dimensional in the incubators of future leaders.

At the same time, men became increasingly inclined toward silence about negative views of women — some because they felt under siege even if they were in favor of equality for women. Separating inadvertent and minor offenses against women from the major ones could have been done more effectively. Many men became actively involved in perpetuating the culture of excluding women; after all, it was a more comfortable and rewarding arena in which to reside — to say nothing of the fact that women were now directly competing with men for jobs. Indeed, it’s one thing to be theoretically in favor of gender equality at work and quite another to face the possible loss of your livelihood. Such were the ignition factors of backlash.

Also, women grew tired of struggling on behalf of their gender. Always having to prove commitment to the job and saying little of their children to prevent the perception of being distracted became taxing. We continue to see the effects. Helena Morrissey, chief executive of the Newton subsidiary of BNY Mellon and a leading campaigner for gender equality in the workplace, told The Financial Times, “It’s so tedious that there still seems such a problem.”

In 1979, Radcliffe’s president Matina Horner described a "crisis of confidence" facing women in the choices they encountered between family and career. This was especially true 10 years later for those women who worked full-time outside and inside the home, as described in 1989 in The Second Shift. As Gloria Steinem has said, “The truth is that women can't be equal outside the home until men are equal in it."

The confidence crisis continues today, as Katty Kay and Claire Shipman have written in The Confidence Code. Women tend to negotiate lower salaries than they deserve and to believe they must be 100 percent qualified for a job or promotion.

Earlier this month, The Financial Times reported that more women are leaving fund-management careers. They’ve had it with sexist slights and corporate cultures that demean their value, even though research shows that female fund managers have better track records and that diverse groups in this field are more effective than those dominated by white males. Sixty-five percent of female fund managers reported regularly experiencing sexist behavior at the office. Their male colleagues also report seeing such behavior directed at women on a regular basis. Moreover, Catalyst research recently indicated a serious depletion of women in high-tech careers. They’re leaving shortly after they arrive.

It isn’t all bad news, of course. Women are succeeding as entrepreneurs. Pay equity in some sectors is almost where it should be, and young women enter the workplace more aware and with higher expectations. Increasingly, there are efforts to recruit women to the fields of science and engineering. Women are seeking graduate degrees and in larger numbers than ever before. Organizations have learned that hiring large numbers of women results in outperforming their competitors. Clearly women haven’t given up. They’re being realistic about where they’re valued and where they’re not and perhaps rightly realizing that to succeed in those areas they must leave the gender-equity fight largely to others.

How do we help women, and they help themselves, to move forward past the issues that concern them, impinge on their success, make them more tired than they need to be, and, instead, move forward in their careers while also enjoying their families? Here are a few important ways:

Reduce pressure on women to do it all — superbly. There is nothing new about this — women trying to “have it all” when we know no one can. Yet, the discussion about whether women can be all things to all people, including to themselves, is always popping up in the media. Let’s agree to stop it. The final answer to the question is: "No one can have it all." Parenting takes a considerable toll. So does being among the “sandwich generation,” trying to care for young children and aging parents. Something has to give, as Arianna Huffington wrote in Thrive. It does not mean compromising on success, but rather redefining it.

Confidence comes from doing certain things very well. Some days, as author Elizabeth Gilbert proposes, let other people be better parents, better artists, better at whatever because none of us can be wonderful all the time. Women cannot progress in the workplace if they never cut themselves any slack.

Increase work-life reconciliation policies. Since 1990, other nations with comparable resources have implemented a comprehensive agenda of “work-family reconciliation” acts. As a result, when the United States’ work-family policies are compared with those of countries at similar levels of economic and political development, the United States comes in dead last. From The NYT op ed by Stephanie Coontz, “Why Gender Equality Stalled,” comes this conclusion:  “Today the main barriers to further progress toward gender equity no longer lie in people’s personal attitudes and relationships. Instead, structural impediments prevent people from acting on their egalitarian values, forcing men and women into personal accommodations and rationalizations that do not reflect their preferences. The gender revolution is not in a stall. It has hit a wall.”

It’s time to make issues regarding women at work nonpartisan and to put more women in office. Democratic, Republican, and Independent voters work. Equal pay and equal opportunity to succeed belong to no single political party. We need to wrench these issues free of sides and pressure all government representatives to actually represent women, whenever and from wherever they decide to work.

Encourage organizations to notice and reward women’s contributions. Rosabeth Moss Kanter, Harvard Business School professor and author of The Change Masters, describes most organizations as having “a preference for being guided by the past rather than the future, by what is already known rather than what is not yet known.” Reward systems in such companies are what Kanter terms “payoff-centered” rather than “investment centered.”

Women are an investment that research shows pays off. Yet, even in Silicon Valley where forward-thinking companies abound, women are not generally welcome at higher levels. As Nina Burleigh wrote in her Newsweek article, “What Silicon Valley Thinks of Women":  “In inverse ratio to the forward-looking technology the community produces, it is stunningly backward when it comes to gender relations.”

Lessen Reliance on easy fixes. This is a call to get real. We must be somewhat critical here of the press and the blogosphere for the plethora of instant fixes that women have become especially inclined to accept as a means of learning the ropes at work. In an age of six ways to do anything, it’s easy to slip into thinking that if women were just a little more this way or that, they’d be fine. There are some advantages to such tips, but they do not adequately address, let alone fix, the larger problems of sexism, discrimination, inequitable pay, and appalling dearth of women at the highest levels of industry and government.

Band-Aid solutions give the wrong impression of what's involved in getting ahead at work. Learning about politics, for example, is critical to functioning well in organizations. Leadership too. No one learns about these critical skills with a few tips. It’s important to study the work environment, be an avid observer, learn from others — male and female, stretch your style, and practice, practice, practice.

When we look back, it’s clear that women’s equality at work is an extremely tall order. As we move forward, the future will look very different from the past. Women are unlikely to be marching for equality in pay and promotions, but as attention turns once again to these issues, as women are feeling more empowered to expect equal treatment, more supported by other women, movement forward is likely to look like thousands upon thousands of candles in the mist.

Each day, each woman on her own, in small groups, or “circles” will make a difference. If we refuse to forget what has been accomplished, ignore or reframe labels that hold women back, and increase our political and leadership acumen, once again we will move the stone up the hill and this time refuse to let it slip.

Kathleen Kelley Reardon, Professor Emerita at the USC Marshall School of Business and Big Think blogger, is the author of 10 books on communication and politics at work, including The Secret Handshake; the mystery thriller Shadow Campus, about one woman’s perilous struggle with workplace politics described by Forbes as “masterful”; the reprint bestseller Harvard Business Review case, “The Memo Every Woman Keeps in Her Desk”; and the book They Don't Get It, Do They? re-released now on Kindle. She also writes about workplace issues here.