At Burger King, you can order a meatless Impossible Whopper, and McDonald’s now offers a McVegan burger. TGI Friday’s buys meatless burgers from Beyond Meat, and you can even buy a plant-based steak sold by the Dutch company Vivera. A swelling tide of restaurants and food companies are scrambling to offer more bean-, beet-, and soy-based meals to a growing segment of the population that’s eschewing traditional foods in pursuit of better health, cruelty-free diets, and a sustainable future. According to The Economist, a full quarter of 25- to 34-year-olds now identify as vegetarian or vegan compared to the single-digit percentage of the population that were vegetarian or vegan, respectively, in 2015.

Considering the significant contribution of the meat industry to climate change, this should be a cause for celebration. Emphatically, it is. But it’s also important to acknowledge the challenges associated with switching to restrictive diets like vegetarianism and veganism. Human beings evolved as omnivores, capable of extracting nutrition from a variety of sources, and some sources provide different nutrition than others.

One of the more significant nutrients that’s easily lost in a vegetarian or vegan diet is choline. Although small amounts are produced by our livers, choline is an essential nutrient; we require more than what we produce naturally in order to be healthy. We use choline to build acetylcholine, an important neurotransmitter associated with memory and muscle control, and developing fetuses need choline in large amounts in order to build neural structures.

But almost everybody is getting less choline than they need. In the U.S., men and women ingest about 402 and 278 mg per day, respectively. The adequate intake of choline for men and women, however, is 550 and 425 mg, respectively, per day. In fact, only 11 percent of U.S. adults meet this standard.

Unfortunately, vegetarians and vegans get even less choline in their diets. Mainly, choline is found in beef, eggs, dairy products, fish, and chicken. Fortunately, there are vegan sources of choline, such as nuts, beans, and cruciferous vegetables like broccoli, but they tend to have much lower concentrations of the nutrient. 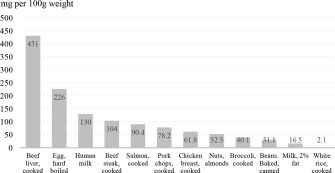 This is particularly dire for pregnant mothers, who require large amounts of choline in their diets. As mentioned earlier, choline is an important nutrient for neural development. Developing fetuses that fail to get enough choline are at higher risk of developing a neural tube defect, where an opening in the spinal cord or brain remains after birth. Additionally, some evidence exists to suggest getting more than the adequate amount of choline when pregnant can have positive effects, too: one study found that mothers who took twice the recommended amount of choline (930 mg) had children with greater information processing speed.

It should be noted that even though adults aren’t getting enough choline, most aren’t choline deficient per se. However, choline deficiency does occur. It can cause fatty liver disease, an often symptomless condition that can put you at risk for more serious conditions like fibrosis or liver cancer; it can cause muscle damage, spasms, and weakness; and it may contribute to some neurological disorders.

Actual choline deficiency is very rare, but some people are at greater risk than others, specifically people who drink a fair amount of alcohol, pregnant women, postmenopausal women, and endurance athletes. If you’re a vegetarian or a vegan and also fit into one of those groups, your risk may be even higher depending on your diet. The easiest way to address any potential concerns is to take a choline supplement. Supplementing choline has been linked to sharper memories and cognitive benefits as well, so there’s little to lose in doing so. For vegetarians, consider eating more eggs, although the research on whether and how many eggs are bad for your heart has been somewhat schizophrenic.

None of this is to say that a vegetarian diet or a vegan diet is unhealthy. Ultimately, the only healthy diet is a healthy diet. You could eat only ramen noodles and Oreo cookies and you would technically be vegan — but that wouldn’t mean you were healthy.

Where do you place precious brain resources?
▸
6 min
—
with
Amishi Jha
Up Next
Neuropsych

Trudging toward happiness: What is the hedonic treadmill?