A 2020 study that surveyed 500 vegetarians (38 percent of which identified as vegans) and 500 meat-eaters has suggested that vegetarians are having better, more fulfilling sexual encounters than meat-eaters.

This survey was conducted by Illicit Encounters, the UK’s largest extramarital dating site. According to survey poll results, vegetarians are more likely to enjoy foreplay and dirty talk than their meat-eating counterparts.

The survey went even further, diving into what specifically the participants were enjoying about their sex lives the most: 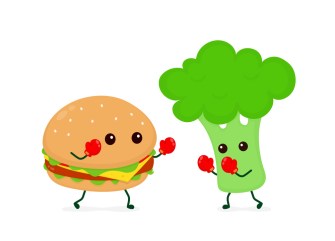 “Never underestimate the power of a plant-based diet,” writes Delfina Ure in Muscle and Fitness. “Every plant, seed, herb, nut, and fruit has a powerful chemical makeup and nutrient profile that promotes optimal body function for a healthy libido…”

Along with packing a punch with nutrients, eating less meat may also mean you have more energy to burn doing other things (like having sex). “Vegetarians have the one up on digestion with plants being easier on the body than a flank of meat,” that same article explains. Plants tend to be easier to break down into nutrients which can give your body a quick energy boost without a heavy feeling.

Erectile dysfunction may be more common in meat-eaters

Studies show around 75 percent of men who suffer from heart disease also suffer from erectile dysfunction. And medical evidence indicates meat-eating can cause impotence because the meat clogs up the arteries going to all the organs, not just the heart.

Diet and digestion can interrupt sleep, which can impact your sex life

A good night’s sleep naturally regulates athletic performance, according to Muscle and Fitness. Not only that, but sleep can impact hormone production, mood regulation, memory, and mental functions, and all of those can impact your sex drive. According to research, 1 in 3 Americans struggle with a sleep disorder and among those, the biggest culprit is diet and digestion.

“If you’re a heavy meat-eater overloading your body with protein you can’t break down, toxins you’re not removing and nutrients your body can’t get to, over time your body’s natural biorhythms will pay the toll…”

Vegetarians may be “more attractive”

According to a 2006 study from Charles University (in the Czech Republic), women may prefer the scent of a man who is vegetarian over the scent of a man who is a meat-eater. This makes sense, considering unprocessed toxins from meat can be released into the bloodstream and large intestines, and then get pushed out of the pores of the skin, causing meat-eaters to have a harsher body odor than vegetarians or those on a plant-based diet.

Someone on a vegetarian or vegan diet may also have better skin. Typical vegetarian diets consist of a lot of vitamins A and C, chlorophyll, and other vitamins/antioxidants that naturally work to clean, detox and revitalize the body (including our skin).

Are you in love? Trust your mother over your brain.
▸
with
Big Think
Thinking

Stoicism says that we should change what we can, endure what we must. The company we keep is something we can, and often should, change.
Up Next
Health

A new study enhanced color vision for individuals with the most common type of red-green color blindness.