Researchers have long known that autism spectrum conditions emerge early during prenatal neurodevelopment. Less well understood is how autistic nerve cells deviate from other neurons or what triggers this divergence. And because the signs of autism can’t be reliably diagnosed until 12 months, at the earliest, this gap between development and diagnosis has led to wild speculation as to the causes of autism among the general public.

Anti-vaxxers continue to spread disinformation on social media despite no evidence linking vaccines to autism. Culpability has been placed on an array of environmental factors, from mercury to contaminated water, processed foods to excessive TV time. None of which is great, but also none of which has been conclusively linked to autism. Then there is the untold number of parents suffering needlessly because someone blamed them for having a “refrigerator”-style of parenting.

To shorten this knowledge gap, researchers at King’s College London and Cambridge University set about to determine how nerve cells develop in an autistic brain. Of course, they couldn’t perform their study on pregnant women. Such a violation wouldn’t reach the docket of any ethics committee, nor is there a means to determine autism before birth. So, they devised an experiment that allowed them to observe developing nerve cells in vitro. 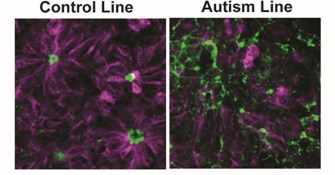 For the experiment, the researchers selected fifteen individuals, six controls and nine people with an autism spectrum condition but from unique genetic backgrounds. They acquired hair samples from each to extract induced pluripotent stem cells (iPSCs). Pluripotent stem cells are cells that can become any cell of the three primary adult cell groups—hence the name, pluri- as in “many” and -potent as in “potential.” These cells can also self-renew and continue to make more copies of themselves.

When a scientist induces a stem cell, they take that cell from its freshman potential and direct it toward senior specialization. In this case, the researchers took the iPSCs and used growth factors to drive them to become nerve cells. They obtained two neural lineages from each individual—one lineage grew into neurons like those from the cortex and the other from the midbrain. Because these iPSCs maintain their owners’ genetic material, they grew along the same neurodevelopmental pathway in vitro that they would have in utero.

“Using iPSCs from hair samples is the most ethical way to study early brain development in autistic people. It bypasses the need for animal research, it is non-invasive and it simply requires a single hair or skin sample from a person,” Dwaipayan Adhya, the study’s first author and a molecular biologist at the Autism Research Centre in Cambridge, said in a release.

The researchers examined the cells at three distinct developmental stages: days 9, 21, and 35. They inspected cellular appearance and also sequenced RNA. They found that the autistic neurons took a very different developmental path than those from the controls.

At day 9, the control neurons cultivated standard neural rosettes, neural-tube-like structures that play a key role in determining cortical neurogenesis. Conversely, the autistic neurons formed smaller or no rosettes and expressed lower levels of key developmental genes. At days 21 and 35, the cellular phenotypes between the autistic and control samples showed even differentiation. The autistic iPSCs, for example, showed an increased rate of cellular identity acquisition but were slower in genetic expression.

Such differences, however, were only seen in the cortical neurons. The midbrain lineages showed little difference between autistic and control samples. Importantly, unlike the cortex, midbrain regions are not known to be associated with autism conditions.

Their evidence strongly suggests that the developmental differences in autistic brains occur early in prenatal neurodevelopment—long before excessive TV time or refrigerator parenting can come into play. The study was published this June in Biological Psychiatry.

A “Unified Theory of Autism”www.youtube.com

Could this research lead to a cure for autism? No, and that’s not its purpose. In fact, the very wording of that question is misleading as autism isn’t a disease. Autistic people aren’t sick. Their brains have simply developed uniquely, leading them to think and see the world through a mental lens that is their own.

As Simon Baron-Cohen, study co-lead and director of Autism Research Centre at Cambridge, said in the same release: “Some people may be worried that basic research into differences in the autistic and typical brain prenatally may be intended to ‘prevent,’ ‘eradicate,’ or ‘cure’ autism. This is not our motivation, and we are outspoken in our values in standing up against eugenics and in valuing neurodiversity. Such studies will lead to a better understanding of brain development in both autistic and typical individuals.”

Future studies in this area may lead to improved diagnostic techniques. This may help families find the resources and support they need to put kids on the path to a healthy, happy life earlier. And the more we know, the more knowledge we have at our disposal to counter disinformation, limiting the spread of the fears and misunderstandings that surrounds autism and other neurodevelopmental conditions.

New memories appear to be stabilized in the brain by a neurotransmitter called gamma-aminobutyric acid (GABA).
Hard Science

Maybe the brain isn’t “classical” after all.
The Present

The larger truth on the streets is that no one uses just one drug anymore.
Up Next
Starts With A Bang

There was less than a 2 second delay between gravitational waves and light, but that’s incredibly meaningful.There’s an important rule in relativity that — as far as we know — all objects must obey. […]