Brain mapping is one of the hottest current areas of research.

The brain is nothing short of amazing. Billions of neurons are in there — the current best guess is about 86 billion — and a roughly equal number of non-neuronal cells. The number of interconnections, or synapses, across which neurons communicate via chemical and electrical signals is believed to be about 125 trillion. There’s a whole universe in there, even though the average adult brain weighs merely three pounds and measures just 140 mm x 167 mm x 93 mm.

Though we know a lot about the anatomy of the brain, its functions remain largely enigmatic. For instance, what is the biological mechanism that encodes memories? On a computer, files are encoded digitally with a series of ones and zeroes, a type of discrete storage. Cassette tapes are analog recordings, and information is stored magnetically. How does the brain store information? We don’t know. Where consciousness is located in the brain — that is, the parts and functions that make us “us” — is likewise shrouded in mystery.

The challenge is described well by the journal Nature:

“Neuroscientists know frighteningly little about the brain’s complexity. They have sketched out the broad anatomy of the brain, and realize that individual functions… are mediated by circuitry that crosses anatomical borders. They can examine the detailed electrical activity of small numbers of neurons. They can wield imaging technologies that show which brain areas are activated during defined tasks, such as viewing pleasant or unpleasant pictures. But those tiny (in brain terms) pieces of information have not led neuroscientists to the big picture: what we mean by human consciousness, what makes us our individual selves or why some people develop psychiatric disorders. Neuroscientists need to be able to join the dots — and there are a lot of dots.”

As intimidating as this is, neuroscience is making incremental progress. We can correlate various actions and thoughts with brain activity. Scientists at Berkeley, for example, can tell what part of your brain will exhibit electrical activity when you read certain words and phrases.

The first type, which is what we are concerned with, is described by the Society for Brain Mapping & Therapeutics as “the study of the anatomy and function of the brain and spinal cord through the use of imaging, immunohistochemistry, molecular and optogenetics, stem cell and cellular biology, engineering, neurophysiology, and nanotechnology.” One might fairly add physics and quantum physics to that list.

The second type of brain mapping deals with identifying areas of the brain using qEEG technology in order to strengthen or heal them through neurofeedback training. Neurofeedback practitioners claim some impressive therapeutic value for people with all sorts of conditions relating to the brain, including ADHD, autism, depression, and anxiety. Some experts have expressed skepticism about some such claims. The jury’s still out on this type of brain mapping.

What kind of map could map the brain?

A brain map, therefore, could be something like an atlas — a collection of maps that document various neural pathways. But, unlike a road map, it can’t be two-dimensional. A brain map of the cortex alone would have to be three-dimensional.

The number of interconnections, or synapses, across which neurons communicate via chemical and electrical signals is believed to be about 125 trillion.

The cortex, or gray matter, which contains billions of neurons and synapses is folded in such a way that sections that would be distant from each other come into close proximity. This is useful because it shortens the distance that signals have to cross from one part of the brain to another. The folds also greatly increase the cortex’s surface area, which means we can cram more gray matter inside our skulls.

Folding itself is implicated in some neural disorders, and scientists wonder if we might one day be able to modify a brain’s folding.

A need for unprecedented collaboration

Aside from the obvious scientific and technological difficulties, Martin La Monica, writing for The Conversation, wonders if some human barriers may also get in the way. He raises three concerns:

Ultimately, La Monica’s third consideration touches upon what may be the human brain mapping’s biggest underlying challenge. As UCLA Health notes, the project is the polar opposite of “reductionistic approaches in medical science.” Instead, “brain mapping integrates many sources of information to produce a holistic view, the value of which is greater than the sum of its parts.” 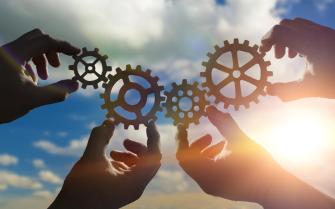 This will demand an unprecedented level of collaboration and cooperation between organizations and scientists from a broad swath of scientific disciplines.

Brain mapping for the win

There is almost nothing about mapping the human brain that will be easy. From logistical issues (like the open exchange of information) to scientific challenges (such as technological and theoretical advances), much will be required to make sense of the human brain.

With the brain so central to our being, there’s a tremendous amount of research relating to it. There’s a continual stream of new insights regarding the way it functions and the ways it sometimes doesn’t function so well.

For scientists seeking to understand the brain, and for doctors working to help their patients enjoy life to its fullest, a comprehensive map that brings all of the best, most recent information together is more than worth the Herculean effort required to make it happen.

The use of AI within mental health services could be a game-changer.
Up Next
Strange Maps

Without the now-obscure land investment affair, Georgia might have been a “super state.”