Imagine wearing a helmet that enables you to communicate with people, or control a machine, with only your thoughts.

For the past few years, a team of neuroengineers at Rice University has been working to develop just that. The team recently received $8 million in follow-funding from the Defense Advanced Research Projects Agency (DARPA), having already conducted successful experiments on insects. Working alongside more than a dozen other groups, the researchers plan to use the funds to conduct further tests on rodents and, potentially within two years, on humans.

Wireless linkage of brains may soon go to human testingyoutu.be

But non-invasive brain-machine interfaces are more complex, and they’re currently not precise enough to be useful. That’s why Rice University’s MOANA (“magnetic, optical and acoustic neural access”) effort aims to create an effective and noninvasive interface that enables brain-to-brain communication at the “speed of thought.”

To read and write brain activity, the interfaces uses light and magnetic fields, both of which can penetrate the skull. In previous experiments, the researchers injected flies with nanoparticles and used ultrasound to guide the particles to specific neurons in the insects’ brains. This allowed the researchers to control the flies’ behavior. In more recent experiments, the team tested whether MOANA technology could transmit signals from brain to brain. 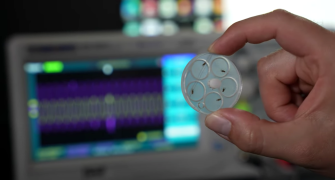 Insects that have been injected with nanoparticlesCredit: Rice University

“We spent the last year trying to see if the physics works, if we could actually transmit enough information through a skull to detect and stimulate activity in brain cells grown in a dish,” Jacob Robinson, lead investigator on the MOANA Project at Rice University, told the university’s Office of Public Affairs.

“What we’ve shown is that there is promise. With the little bit of light that we are able to collect through the skull, we were able to reconstruct the activity of cells that were grown in the lab. Similarly, we showed we could stimulate lab-grown cells in a very precise way with magnetic fields and magnetic nanoparticles.”

If rodent experiments prove successful, the team plans to conduct trials on blind patients, who would be injected with nanoparticles. Using ultrasound waves, the researchers would guide the nanoparticles to the brain’s visual cortex.

There, the nanoparticles would be stimulated to activate specific neurons, which could potentially restore partial vision to the patients. For example, blind people may someday wear a camera that transmits visual data through the interface and enables them to see what the camera is looking at.

But while restoring vision to the blind is the near-term goal, DARPA has additional applications in mind. The MOANA Project is part of the agency’s Next-Generation Nonsurgical Neurotechnology (N3) program, first announced in March 2018. The Rice University team and others have been working with DARPA to develop noninvasive brain-machine interfaces that soldiers may someday use to, say, control drones in the battlefield.

“If N3 is successful, we’ll end up with wearable neural interface systems that can communicate with the brain from a range of just a few millimeters, moving neurotechnology beyond the clinic and into practical use for national security,” Al Emondi, the N3 program manager, said in a statement.

“Just as service members put on protective and tactical gear in preparation for a mission, in the future they might put on a headset containing a neural interface, use the technology however it’s needed, then put the tool aside when the mission is complete.”

If the human trials prove successful, it could greatly accelerate the development and adoption of brain-machine and brain-to-brain interfaces. After all, even if other types of brain-machine interfaces are effective, it’s likely that many people won’t want to have a device implanted into their skull.

Your eyes are playing tricks on you.
The Future

Experts believe they could cut the time it takes a rocket to reach Mars by up to 25%, shaving about two months off the trip.
The Future

A “bio-battery” made from genetically engineered bacteria could store excess renewable energy and release it as needed.
Up Next
The Present