A recent Big Think piece noted that more cancers occur by random chance than for any other reason. This said, given the apparent complexity of the disease, it seems odd to encounter a study suggesting a blanket maxim for cancer risk. However, this is what Leonard Nunney of UC Riverside has done in The Royal Society of Biological Sciences. His claim? The taller you are, the more at risk you are of cancer. Why? Because you have more cells, and things may be more likely to go awry.

There’s a caveat to this study. According to Peto’s Paradox, mice have more of a risk of cancer despite having less cells. This report assumes that cancer risk increases in relation to height within a species. It poses an interesting hypothesis about correlation and then uses that correlation to guess at the causation.

The study leaves us wondering why this theory — that more cells equals more risk of cancer — is focused on humans and, peripherally, on dogs and not on an animal with even more cells? Is there anything in particular about the stability of cells in a human after a certain point that challenges the overall integrity of the body-wide cell-structure as other multidimensional factors at play in cancer continue?

The study doesn’t necessarily make this point clear, nor does it go to particularly great lengths to explain the fact that — in the author’s words — “skin cancer appears to show a consistent relationship to height that is too strong to be adequately described by the cell-number hypothesis in its simplest form,” let alone the fact that pancreatic cancer, cancer of the oesophagus, stomach cancer, cervical cancer, and mouth cancer all seem to diverge from the expectations of the hypothesis, as well as the fact that natural breast size is not a determinant of breast cancer.

Based on this, the study seems to tread roughly similar analogous ground with the study that examined the role your genes could very well have in your education.There’s a degree to which the point the researchers are getting at seems reasonable, something worth keeping an eye on, but it also feels reasonable to say, in making sense of the research, that there’s a human degree to which the given answer feels like it shouldn’t come this easily and simply either. That is to say, that tallness is inherently “cancer causing.” 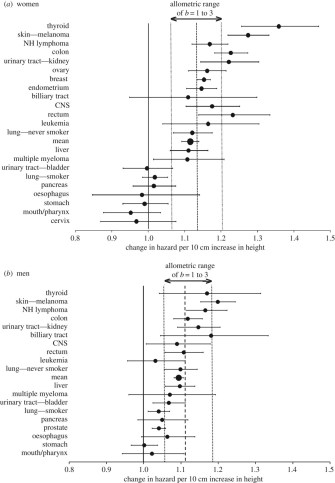 “A comparison of the observed and predicted effect of height on the risk of specific cancers.”

Nevertheless: the predicted occurrence of cancer and the actual rates of cancer across multiple surveys conducted in the United Kingdom, the United States, Norway, Sweden, Austria, and Korea do seem to line up to a certain degree. The predicted cancer risk for men and women in relation to height compared with the actual cancer risk in relation to height was 1.11 versus 1.09 for men and 1.13 versus 1.12 for women. These numbers are part of an allometric rating, which is used to examine the relationship between body size and shape. The chart used in the study looks at the change in risk per 10 cm increase in height on a scale of 1 to 3. Using this chart, which you can see above, a height effect was found in 18 of 23 cancers examined.

As to why there was a stronger than usual link between height and skin cancer, Nunney believes that the additional effect impacting the results could well be an increasing cell division rate mediated through IGF-I, a protein akin to insulin that helps children grow, helps bones grow, and helps muscle mass develop. However, his suggestions — along with the other intriguing results here — merit further exploration.

All this said though, it’s still safe to say that cancer doesn’t discriminate. Just because someone isn’t tall should they believe that they’re beyond risk after reading this. Eat well. Don’t smoke. Exercise. Visit the Doctor.

Kids don’t always make you happier. Here’s why people have them anyway.
▸
5 min
—
with
Paul Bloom
Up Next
Starts With A Bang

What Was It Like When Life In The Universe First Became Possible?

Sugar molecules in the gas surrounding a young, Sun-like star. The raw ingredients for life may exist everywhere, but not every planet that contains them will develop life. (ALMA (ESO/NAOJ/NRAO)/L. […]