There are currently no laws against opening a sex robot brothel in Houston, but recently announced plans to open one have some residents saying there should be.

The owner of Kinky S Dolls, a Toronto-based company where $120 gets customers 80 minutes alone with a robotic sex doll that moves and talks, plans to open another location in the Houston area. It would be the first sex robot brothel in the U.S.

On advice from counsel, owner Yuval Gavriel doesn’t call his business a ‘sex robot brothel’ but rather a kind of try-it-before-you-buy-it shop for realistic sex dolls, which he sells for $2,000 to $5,000.

“I consulted with a lawyer and the lawyer said, ‘Listen, there are no rules to it, but if you are smart you don’t go out and say you are operating a brothel,'” Gavriel told the Washington Examiner. “He went through all the laws and all of the regulations and currently there are no regulations for this kind of service. The States is a bigger market, and a healthier market, and God bless Trump.”

Sex dolls and robots may be legal in the U.S., but some believe that establishing what’s essentially a robot sex brothel would cross a line. In response to Gavriel’s plans, Elijah Rising, a Christian organization in Houston that combats sex trafficking, published a petition titled ‘Keep Robot Brothels Out Of Houston’.

“As a nonprofit whose mission is to end sex trafficking we have seen the progression as sex buyers go from pornography to strip clubs to purchasing sex—robot brothels will ultimately harm men, their understanding of healthy sexuality, and increase the demand for the prostitution and sexual exploitation of women and children,” reads the petition, which currently has nearly 6,000 signatures.

Elijah Rising’s argument is based on a paper written by Kathleen Richardson, a professor of ethics and culture of robots at De Montfort University.

“I propose that extending relations of prostitution into machines is neither ethical, nor is it safe,” Richardson argues in the paper. “If anything the development of sex robots will further reinforce relations of power that do not recognise both parties as human subjects. Only the buyer of sex is recognised as a subject, the seller of sex (and by virtue the sex-robot) is merely a thing to have sex with.”

How would sex robots affect rates of prostitution?

In his bestselling book Love and Sex with Robots, A.I. researcher David Levy explores the future of human relationships with robots and suggests that sex robots could reduce prostitution rates, or even someday render it obsolete.

But that’s “highly speculative philosophy,” according to Richardson.

“The reality is that it will just become a new niche market within the pornography industry and within the prostitution trade,” she said in an interview with Feminist Current. “If people buy into the idea that you can have these dolls as part of your sexual fetish, it will become another burden that actual living human beings will have to undergo in the commercial sex trade.”

Richardson elaborated on this idea in her paper.

“…studies have found that the introduction of new technology supports and contributes to the expansion of the sex industry,” she wrote. “Prostitution and pornography production also rises with the growth of the internet. In 1990, 5.6 percent of men reported paying for sex in their lifetime, by 2000, this had increased to 8.8 percent.”

Richardson also wrote that if sex toys, such as RealDolls and blow-up dolls, actually led to lower prostitution demand then we would have already seen decreases, but “no such correlation is found.”

Still, that last point might soon become invalid as a sort of apples-to-oranges comparison if technology can produce artificially intelligent and lifelike sex robots unlike anything the industry has seen before. 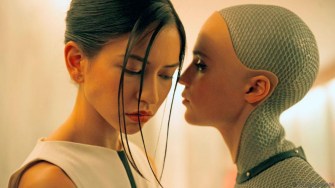 An illusion of companionship

Critics argue that the proliferation of sex robots would serve to reinforce the objectification of women in men’s minds, and also reduce the ability for some men to empathize, a necessary component of healthy social interaction.

Houstonian Andrea Paul voiced a simpler objection to the brothel:

“There’s kids around here and it’s a family-oriented neighborhood and I live right here and to have that here is just gross.”

Gross, sure. But to Matt McMullen, creator of the RealDoll, the future of sex robots looks a bit more uplifting.

“My goal, in a very simple way, is to make people happy,” McMullen told CNET. “There are a lot of people out there, for one reason or another, who have difficulty forming traditional relationships with other people. It’s really all about giving those people some level of companionship—or the illusion of companionship.”

The so-called “court painter of Silicon Valley” was shaped by her youth in communist Poland but looks forward to a future ruled by celebrity robots.
The Well

Dr. Sara Walker is an astrobiologist and theoretical physicist, who is questioning the very nature of life and how we’re attempting to find it elsewhere.
▸
6 min
—
with
Sara Walker
Up Next
Hard Science

Found: edited draft of Galileo’s argument for a heliocentric model

At least he wasn’t burned at the stake, right?