The idea that the planets, including Earth, revolved around the Sun was first proposed by Copernicus in 1543. It was a radical departure from the religionist worldview of the time, and when Galileo confirmed this via his own observations, it caused quite a bit of consternation from the folks who led the Catholic Inquisition, as well as the Catholic Church itself. The church, you see, held strongly to the Earth-centered universe at the time, and to contradict their beliefs was straight-up heresy.

When a letter, dated December 21, 1616, was first sent to mathematician Benedetto Castelli with Galileo’s proofs of the Copernicus heliocentric (sun-centered) model, along with the assertion that scientific research should be free from theological doctrine, it was forwarded to the Catholic Church, which labeled the letter “heresy,” declared it an attack on the church, and blasted what it perceived as incendiary language. The Italian astronomer was found guilty of heresy in 1633.

Exclusive: Galileo’s original letter arguing against church doctrine that the sun orbits the earth has been discovered, revealing new details about the saga that led to his condemnation for heresy. https://t.co/S7bKYWS2bB
— Nature News & Comment (@NatureNews) September 21, 2018 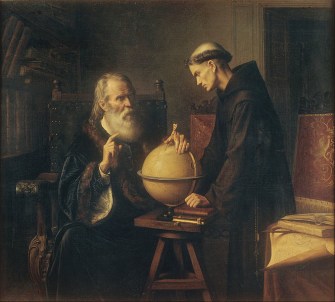 As it turns out, Galileo pulled some punches after he wrote the first draft that was sent to Castelli — a copy of which was sent to the Inquisition in Rome. In a recently rediscovered second draft, Galileo’s hand can seen blotting out some of the harsher phrases of the original letter, substituting them with open-ended ones. For example, in reference to certain biblical claims, he crossed out the word “false” and substituted “look different from the truth.”

There was good reason for caution. A few short years earlier, in 1600, scientist Giordano Bruno was found guilty of several heresies, including supporting the Copernicus heliocentric model of our solar system. He was burned at the stake by the church.

In fact, when the Vatican received the first, uncensored version, Galileo pushed out the revised version in an attempt to throw them off his trail. The final edited version did make its way to the Vatican, but it still set church officials off.

Galileo’s books were banned, and he was sentenced to prison. That was commuted to house arrest, where he served the last nine years of his life.

Beyond suggesting that Galileo moderated his own text, another particularly fascinating thing about the recently discovered second draft is that it lived incognito in the London Royal Society Library for, at least, 250 years. It has been misfiled.

“I thought, ‘I can’t believe that I have discovered the letter that virtually all Galileo scholars thought to be hopelessly lost,” Ricciardo told Nature. “It seemed even more incredible because the letter was not in an obscure library, but in the Royal Society library.”

The first human that isn’t an Earthling could be in our lifetime.
▸
5 min
—
with
Robert Curbeam
Up Next
Hard Science

How Earth sheds heat into space

New insights into the role of water vapor may help researchers predict how the planet will respond to warming.