As Scott Carney pushes his shopping cart through multi-colored aisles in his local Denver grocery, he notices the many promises each item makes. A bag of chips promises fun. Coconut oil will boost his IQ. Even broccoli gets in on the game. By purchasing a few stems, Carney helps save the world. That’s a tall order for a cabbage.

On this day, Carney is only there for one purpose: potatoes. Utilitarian shopping, sure, but that’s the point. The investigative journalist wants to deny his taste buds to see the emotional response it evokes. What if we ate only for nutrition? Sustenance was the driver for eons, before the magic of refrigeration changed our relationship to food (even what is considered food). The Potato Hack is no hip new paleo diet. Carney wants to know how food marketing became so absurd that every package has to purport untold benefits—and why we buy in.

More importantly, this is Carney putting in the work to find out. Five days, nothing but spuds. As he writes in his new book, “The Wedge: Evolution, Consciousness, Stress, and the Key to Human Resilience,” the Potato Hack isn’t his idea. Penn Jillette famously used it to shed 100 pounds. Others have advocated it as a guaranteed weight-loss protocol. But Carney isn’t overweight. He wants to discover how eating potatoes effects his affective state, especially in the evening when he starts craving “chocolate and maybe a glass of whisky on the rocks.”

“The Potato Hack was really about trying to understand how taste frames my world,” Carney told me from his Denver home in early March. Our Paleolithic ancestors, he says, were always up against a calorie deficit. We are not, and that greatly affects our health, usually to our detriment.

“Every time we eat in the modern world, we have the opposite of a calorie deficit. We have an overabundance of calories, but we still have that paleolithic response to food. Every food marketing company in the world knows this. You walk down the aisles of any grocery store and there’s yogurt that’s going to put a party on in your mouth.”

For Carney, eating nothing but potatoes—no oil or fancy preparation, just a sprinkle of salt and pepper—seems to be the least of his concerns. He traveled around with people who sell organs on the black market. He investigated one particularly troublesome cult (which, amazingly, persists to this day). Most famously, he climbed Mount Kilimanjaro with Wim Hof in 28 hours, mostly shirtless. Potatoes seem like a luxury.

Only they aren’t. Food is at the emotional core of our being. Alongside sex and shelter, it’s a basic animal need. On a nutritional level, potatoes (which should only be done for three to five days) offer enough calories to subsist while making you feel full. What’s missing are those habits you develop, your relationship to fatty and sugary foods that are always available. Deprivation is the key to understanding yourself.

Which in many ways describes “The Wedge.” Carney considers it a sort of follow-up to “What Doesn’t Kill Us,” his NY Times bestseller on the “Ice Man,” Wim Hof. For that book, Carney sat in ice baths and devoted himself to Hof’s breathing protocols, both of which are claimed to help boost your immune system as well as help you push beyond mental and emotional hurdles. For “The Wedge,” he wanted to know how else he could test his boundaries. 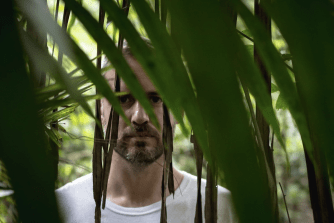 Carney says that our nervous systems are not designed for comfort. Our ancestors lived in radically different environments. Humans were somewhere in the middle of the food chain for most of history. How could he recreate challenges that wouldn’t kill him but that would prod this ancestral response system into action? And could he use that response for good?

Sensory deprivation tanks do not involve climbing mountains in shorts, yet they can provoke anxiety (as I’ve written about previously). By shutting out external stimulation you’re effectively left, as Blaise Pascal famously said, sitting (in this case, floating) in a room alone with nothing but your thoughts. Carney returned to ice baths, yet he tried the other extreme, reporting on the benefits of saunas. He threw iron balls back and forth and didn’t lose any toes. Potatoes aren’t the only root he dug up, as he visited a Peruvian rainforest to partake in ayahuasca ceremonies (following an encounter with MDMA). That last experience certainly left an imprint.

“The shaman is singing, he’s playing these songs, so it’s already a psychedelic experience. You add a psychedelic and it creates this internal chaos that you’re essentially trying to manage. They’ll tell you that the messages you’re getting are from the plant—the spirit of the plant is speaking to you. I don’t know if that’s true; that may just be a very good analogy for someone who grew up in the Amazon. But I will say it’s showing me things about my psyche and my past, where I get to look at those things from a perspective outside of myself and gain lessons that are really useful and very personal. Some of it is really hard to deal with.”

The essence of resilience: the ability to deal with your emotions. Whether you’re digging up root vegetables or brewing vines that dig up the root of who you are, you test yourself every time you’re faced with dangers great or small. To do that, you have to push past your comfort zone, even a little.

Carney could not have foreseen the timeliness of his exceptional new book. The world has run right up into its own wedge. There’s a ton of stimulation right now, mostly in the forms of uncertainty and sadness, and all of it will require a response. How we reply determines who we are on the other side.

If ever we needed a key to resilience, here we are. If there’s one takeaway from “The Wedge” it’s that you never really know your limits until you test them. Carney has done the legwork. Now it’s our turn.

Tags
biologycuriositydiethealthhuman bodymental healthpersonal growth
In this article
biologycuriositydiethealthhuman bodymental healthpersonal growth
Related
Thinking
What if you could rewire your brain to conquer suffering? Buddhism says you can
For Buddhists, the “Four Noble Truths” offer a path to lasting happiness.
Health
When’s the best time to consume caffeine? Hint: Not right after you wake
Get the most out of your coffee.
Health
The scientific highs and lows of cannibinoids
Hundreds of these cannabis-related chemicals now exist, both natural and synthetic, inspiring researchers in search of medical breakthroughs.
Health
How saliva changes the flavor of food
“It’s a liquid, but it’s not just a liquid.”
Neuropsych
Memory and the benefits of forgetting
Forgetfulness isn’t always a “glitch” in our memories; it can be a tool to help us make sense of the present and plan for the future.
Up Next
Neuropsych
I was homeschooled for 8 years: Here’s what I recommend
What subjects and ideas do you discuss with your friends when you see them?