According to the Swiss food giant, scientists in their employ have found a way to cut the sugar content of chocolate up to 40% without sacrificing taste. Researchers have altered the molecular structure of sugar, hollowing it out in such a way where it tastes sweeter when it engages the tongue, yet dissolves faster, leading to a smaller amount being ingested.

Using this unique process, Nestlé plans to reduce the sugar content in all of its confectioneries, including the Kit Kat and the ever popular Butterfinger. This comes on the heels of many US cities such as New York and Philadelphia, and other nations including the UK and Mexico, implementing sugar taxes on such products. Since 1980, childhood obesity and diabetes has quadrupled, and research has shown that such disincentives can positively influence behavior. PepsiCo Inc. and others have their own teams of scientists searching for ways to cut sugar. Since Nestlé plans to patent their process, the insight from the filed papers could lead competitors to their own processes.

Sugar is nothing more than empty calories. Eating too much of it can pack on the pounds, increasing the risk of cardiovascular disease, type 2 diabetes, and certain forms of cancer. More worrisome still, a high sugar intake can elevate your risk of heart disease, regardless of whether or not you are overweight. For Americans, sugary drinks are the biggest threat, particularly sodas, fruit juices, sweetened iced teas, and sports drinks. Candy, ice cream, and baked goods are significant contributors, however. 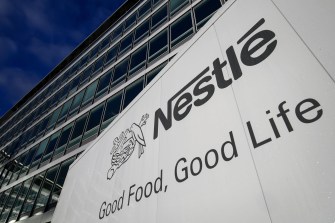 Nestlé, Pepsi Co., and Frito Lay among others have recently vowed to reduce unhealthy ingredients in products.

Health experts advise five percent of daily calories come from sugar, maximum. According to the American Heart Association, a man’s limit is nine teaspoons or 37.5 grams per day. That’s 150 calories. For women its six teaspoons or 25 grams per day, equaling 100 calories.

Your average Kit Kat contains 23.8 grams of sugar. So just this candy bar alone is almost a full day’s intake. Americans are consuming an average of 20 teaspoons of sugar per day, more than twice the recommended amount.

Stefan Catsicas is Nestlé’s chief technology officer. Though he wouldn’t speak of the details which are proprietary, Catsicas said the process entails hollowing out sugar crystals. The company is patenting this method, and will use it with all its products by 2018. Nestlé began investigating sugar reduction due to pressure from governments, consumer advocate agencies, and consumers themselves. The obesity epidemic worldwide is rising significantly, and governments around the world are growing more and more concerned.

So how did they stumble upon this molecular miracle? “Real food in nature is not something smooth and homogeneous,” Catsicas told Bloomberg News. “It’s full of cavities, crests and densities. So by reproducing this variability, we are capable to restore the same sensation.” Meanwhile, Pepsi Co. is reportedly experimenting with a similar process with salt. Say hello to healthier Cheetos… maybe.

To learn more about how to eat healthier click here:

Tags
candychocolatediabetesdietepidemichealthKit KatNestleobesityPepsisugarsugar tax
In this article
candychocolatediabetesdietepidemichealthKit KatNestleobesityPepsisugarsugar tax
Related
The bizarre history of exercise explained in 8 minutes
Harvard professor Daniel Lieberman debunks the ‘10,000 steps per day’ myth.
▸
8 min
—
with
Daniel Lieberman
Health
America’s maternal death rate: “This is a national crisis”
Black women are 3x more likely to die giving birth. Here’s one plan to fix that.
▸
7 min
—
with
Michael Dowling
Harvard professor debunks the biggest exercise myths
Exercise culture is crazy. But what you need to do is exceedingly simple.
▸
with
Daniel Lieberman
Mind hack: Revive your focus with this 12-minute exercise
A neuroscientist explains how to master your focus.
▸
7 min
—
with
Amishi Jha
Videos
Are you developing Alzheimer’s?
Only 2% of Alzheimer’s is 100% genetic. The rest is up to your daily habits.
▸
9 min
—
with
Lisa Genova
Up Next
Hard Science
Are Science’s Preferred Languages Limiting How Smart Folk Think?
Few see how strongly science’s preferred languages shape and limit the thinking of many experts.