Twenty years ago, while I was working as a reporter in Princeton, I met a vegetarian butcher. She was a hearty Russian grandmother, very reminiscent of my own. Day after day she sliced meat in her deli but refrained from indulging—except, she told me, around Thanksgiving. Then she allowed herself a few slices of turkey.

I’ve given up trying to follow the many strange strains of diets we concoct. Was the butcher truly vegetarian? Activists would say no. Yet is “mostly vegetarian” a vegetarian? Do a few slices of meat per year matter that much in the larger scope of nutritional content?

I’ve met vegans who eat eggs and have heard it argued that shellfish can be part of a vegan diet. There’s that weird philosophy about nightshades ruining meditation, and we can spend hours debating biblical-era food rules. Recently, at the farmer’s market, a woman at the Korean stand asked if tempeh has protein, because she was on a “no protein diet.” Too many layers to dissect there.

Of course keto fans would have to confuse things further. Instead of saying, “I’ve reduced carbs a bit,” the following four keto-esque diets are gaining steam. Not that any of these diets are bad, mind you—carb reduction, as mentioned, is positive for many people. Before we dive into the varieties, let’s start at the beginning.

On it’s most basic level, a ketogenic diet requires restricting your daily carbohydrate intake to under 50 grams a day to force your body to burn stored fat instead of glucose for energy. This generally means eating 85 percent fats, 10 percent protein, and 5 percent carbs, though I’ve seen differing variations of the fat/protein trade-off. The 5 percent carbs standard is the constant in what we associate with getting into ketosis.

As mentioned above, this diet is basically just carb reduction. Your daily fat intake is still high, at around 60-65 percent, with protein coming in at 20 percent and carbs making up the other 15-20%. This diet is popular among those who feel that a full ketogenic diet misses the consumption of essential nutrients. According to Kate Save, co-founder of a weight loss meal service:

Full keto [focuses] on macronutrient whereas mild keto focuses on nutrition and micronutrients so you’re not [focusing] on where the calories are coming from you’re looking at the diet as a whole. Plus, mild keto ensures that you can still eat from all five food groups which makes it easier to get 100 per cent of the recommended daily intake of vitamins and minerals.

As explained here, this diet is similar to carb cycling, with slight variations. Carb cycling means four-to-six days on a low-carb diet while the other one-to-three are in the higher range. The problem is that this doesn’t get you into ketosis. And so to utilize ketones, keto cycling diet requires that 75 percent of your calories are from fat on five-six days a week, keeping carbs under 10 percent. “Re-feeding” days involve eating carbs for 60-70 percent of your total calories on one-two days per week.

You want to get your carbs from whole foods sources, such as oats, quinoa, sweet potatoes, and beans, and avoid bread and baked goods, or other high-sugar processed foodstuffs. This diet is used by bodybuilders and athletes looking to maximize weight loss. 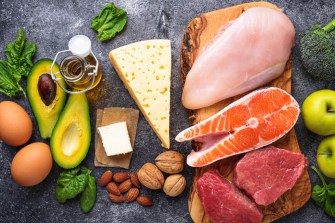 With this keto incarnation, you’re still restricted to 5 percent carbs, yet your fat content falls drastically to 60 percent. The remaining 35 percent comes from protein. It’s basically a high-fat version of The Zone diet, in which the neurosis of tracking every micronutrient adds a level of cognitive strain that could be put to better use, though adding more protein to the standard ketogenic diet is certainly not a bad choice.

This diet is specifically linked to carb consumption as it revolves around your workouts. Forget gorging on pasta the night before a marathon—the details are much greater. You want to consume 25-50 grams of carbs thirty minutes to an hour before working out. These are the only carbs you eat that day.

According to Steph Lodge writing for Perfect Keto:

The TKD is a hybrid between the standard ketogenic diet and the cyclical ketogenic diet. It allows you to train at higher intensities at the gym, but doesn’t force you out of ketosis for extended periods of time (as with the CKD).

I appreciate the above site simply because it states that TKD is dependent upon goals. Too many sources treat ketogenic diets as a panacea to all sorts of health problems. But underlying this is the reality that we do eat too many carbohydrates, which often leads to weight gain, which then has the potential to lead to all sorts of diseases.

As I recently wrote, there is credible evidence linking ketogenic diets to potential decreases in incidences of cancer and diabetes. It doesn’t take reams of data to understand that more carbohydrates equals more obesity equals more health problems. All of the ketogenic diets in the world point to a simple fact: we eat too much sugar in all its many carbohydrate forms. Reduce that, and common sense dictates that problems start to solve themselves.

Tags
diseasehealthhuman bodyillnessketogenic dietmotivationobesity
In this article
diseasehealthhuman bodyillnessketogenic dietmotivationobesity
Related
Health
How saliva changes the flavor of food
“It’s a liquid, but it’s not just a liquid.”
Health
New blood types are often discovered following medical disasters
New blood types are regularly discovered by an unusual absence or an unusual presence — both of which can result in tragedy.
Neuropsych
How you breathe affects your brain
Your breathing rhythm influences a wide range of behaviors, cognition, and emotion.
Health
COVID, RSV and the flu: A case of viral interference?
Viruses, it turns out, can block one another and take turns to dominate.
Neuropsych
Shopping with your nose: How body odors influence your buying behavior
Sniffing out a deal.
Up Next
Neuropsych
How non-industrial cultures view mental illness
Culture determines how mental illness or aberrant mental behavior is viewed and dealt with.