If people think taxing soda is a bad idea, wait until they hear about the juice man coming for their cash.

Taxing soda is not a bad idea, however. As one study shows, consumption of sugary drinks dropped 52 percent among low-income Berkeley residents after a tax was implemented. Short-term gratification—”Keep your hands off the price of my cola!”—is giving way to long-term public health.

Advocates of sugar taxation argue that raising prices is an effective tool for fighting obesity, cardiovascular problems, diabetes, and other “diseases of affluence.” A new study, published in the International Journal of Behavioral Nutrition and Physical Activity, verifies that claim. Labelling 100 percent fruit juice is another step in curbing our appetite for sugar.

Over 3,500 Canadians took part in the study last spring. Participants engaged in an experimental marketplace, with 20 beverages and 20 snack foods for sale. The test conditions include five front-of-package (FOP) nutritional labelling systems and eight tax conditions.

Each participant had to choose one item at the end of their browsing to purchase.

As can be expected, when sugar was taxed in any capacity, fewer products sold. One-hundred percent fruit juice drinks that were taxed “produced greater reductions in sugars and calories than those that did not.” This is important, as fruit juice is often marketed as a healthy beverage, even though there’s little difference between it and soda.

Stroll down the aisle at Whole Foods to find plenty of $10 juice options. Visit any holistic blog to learn about the benefits of juice cleanses. Yet it’s all a ruse, false advertising at its worst. First off, you can’t cleanse your body by juicing. As Exeter University emeritus professor, Edzard Ernst, says:

“The healthy body has kidneys, a liver, skin, even lungs that are detoxifying as we speak. There is no known way – certainly not through detox treatments – to make something that works perfectly well in a healthy body work better.”

That hasn’t stopped marketers from capitalizing. FDA guidelines suggest no more than 10 percent of caloric intake to come from added sugars—that’s 50 total grams of sugar per day (on a 2,000 calorie diet). The FDA is often somewhat lax compared to other agencies. The American Heart Association pegs that number at 36 grams for men and 24 grams for women, adding that keeping your sugar limit below that threshold might confer more health benefits. The World Health Organization also suggests 10 percent.

Enter health-industry capitalism. Consider Blueprint’s “Drink Pretty Cleanse,” which recommends six bottles of juice per day for six days at a cost of $375. Total caloric intake from sugar per day: 171 grams. Besides the fat provided from cashews in one of the drinks, you’re almost exclusively drinking sugar for your entire daily nutritional intake.

The argument often made by such companies is that these calories are not from “added sugars.” In fact, FDA guidelines are forcing manufacturers to include “added sugars” on labels beginning in 2020. A number of companies have already begun using this statistic. A problem remains: You still don’t want the bulk of your calories coming from sugar, whether it’s derived from whole pineapple or molasses. If consumers’ eyes only find “added sugars,” they’re missing an essential piece of the story. 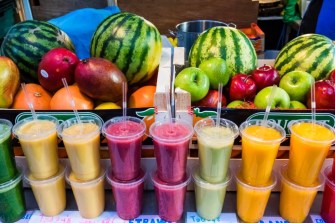 Photo by Dukas/UIG via Getty Images

This is not to victimize fruit, which is healthy—as a desert. The most beneficial part of fruit, fiber, is discarded in fruit juice. Fiber slows the intake of sugar into your bloodstream. If a piece of fruit contains 25 grams of sugar, absorption occurs over several hours; your kidneys have time to process the intake. By contrast, drinking a bottle of juice is basically mainlining sugar.

Another piece of this troublesome puzzle is the many disguises food manufacturers use to sell product. Do we need to be told that our hummus is gluten-free? Or cheese? Likely not, but that hasn’t stopped crafty marketers from bucking a trend.

With companies that rely on sugar for sales, marketing efforts become more insidious. Coca Cola promoting “real cane sugar” during the high-fructose corn syrup hysteria is one example. Rachel Acton, a doctoral student in the School of Public Health & Health Systems at the University of Waterloo (and lead author of the study on fruit juice), says consumer education has to be part of the process, as most consumers don’t bother to read past the hype.

“Many people don’t realize that fruit juice can have just as much sugar, or more, as regular pop, and these types of drinks aren’t always included in a tax when evidence shows that maybe they should be.”

There is precedent. On January 1, 2017, Philadelphia began enforcing a 1.5-cent per ounce soda tax. The result: a 38 percent reduction of sugary drink sales. In total, seven major U.S. cities and almost 40 countries now have soda taxes.

A new analysis from the National Bureau of Economic Research says soda taxes are beneficial to societies that enforce them. In a joint statement in March, the American Academy of Pediatrics and the American Heart Association endorsed taxing sugary drinks.

Fruit juice, whatever the percentage, is a sugary drink. The science on the matter is clear even if the marketing is not. There are too many obesity-related public health crises occurring to ignore such basic, common-sense evidence.

Tags
capitalismconsumerismhealthhealth carehuman bodypublic health
In this article
capitalismconsumerismhealthhealth carehuman bodypublic health
Related
Health
New blood types are often discovered following medical disasters
New blood types are regularly discovered by an unusual absence or an unusual presence — both of which can result in tragedy.
Neuropsych
How you breathe affects your brain
Your breathing rhythm influences a wide range of behaviors, cognition, and emotion.
Health
COVID, RSV and the flu: A case of viral interference?
Viruses, it turns out, can block one another and take turns to dominate.
Neuropsych
Shopping with your nose: How body odors influence your buying behavior
Sniffing out a deal.
The Past
Ceramics, corn cobs, and other strange things we used before toilet paper
Some objects were softer than others.
Up Next
Career Development
Bryan Cranston: How to manage opportunity when time is precious
After his breakout performance as Breaking Bad’s Walter White — and after playing dad Hal in Malcolm in the Middle — it might seem that Bryan Cranston’s always been as […]