One of the most frustrating aspects of medicine is the wild variations in efficacy. A pill that works wonders for one person is useless for someone else. A can’t-fail remedy proves to be completely ineffective, causing you to wonder how it could have ever been pushed to market. It must be Big Pharma playing with consumer minds once again.

Not to let the pharmaceutical industry off the hook, but new research is evolving our understanding of how medicine operates inside of our bodies. The reason that pill worked for your friend but not you? It could be your gut.

New research from Yale confirms longstanding anecdotes regarding the role gut bacteria play in your body’s ability to respond to medication. The researchers tested 271 oral drugs against 76 different types of bacteria in an attempt to mimic the complexity of the human microbiome. Roughly two-thirds of the medications were modified by at least one bacterial strain, while each of the 76 strains modified between 11 and 95 drugs. That essentially means every drug is affected in some way by your microbiome.

How the food you eat affects your gut – Shilpa Ravella

How the food you eat affects your gut – Shilpa Ravella

This is a huge breakthrough in treating patients. Recent evidence has emerged that the 10-100 trillion bacteria that comprise our microbiome are negatively impacted by a major class of drugs: antibiotics. The alteration of your microbiome isn’t always bad — antibiotics could suppress a molecule that leads to heart disease, for example — but overall, tampering with gut bacteria in such a manner has not been proven to be beneficial, and the strength of antibiotics is apparently waning in part of the population.

Though our understanding of the microbiome is mired in complexity, emerging science is quickly educating us as to how our insides operate. Earlier this year, one study linked specific gut bacteria to depression; other research noted that one-third of those suffering from depression are also constipated. Given all of this data, it’s not surprising that certain types of probiotics are showing efficacy in treating anxiety. How we treat our bellies matters for our overall health.

Like human communities, the microbiome is affected by lifestyle changes, diet, and environmental conditions. As science writer Ed Yong notes in his book, I Contain Multitudes: The Microbes Within Us and a Grander View of Life,

The microbiome is not a constant entity. It is a teeming collection of thousands of species, all constantly competing with one another, negotiating with their host, evolving, changing.

In fact, certain species of bacteria are more prominent at different hours of the day, meaning that even the time you take medication matters. Incredibly, a drug that works well in the morning hours might be less effective in the evening. And, of course, this opens an entire new line of questioning regarding diet. 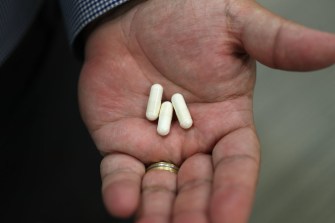 Capsules of bacteria are pictured at Vedanta Biosciences. Vedanta is one of dozens of startups across the globe that hope to make medicines based on the latest insights about the trillions of bacteria, fungi, and other microbes that live inside and on our bodies.

We need our microbiome to be healthy and, as Yong writes, diverse — antibiotics unfortunately destroy diversity. Again, like human communities, a varied population of gut bacteria creates the healthiest environment. That said, every drug has an effect on gut bacteria. Dialing in which drugs work for whom is an essential component of the future of medicine.

Then there’s what happens after medications visit the gut. After testing the drugs in vials, the Yale researchers conducted another experiment with 28 volunteers. Using different medications, they monitored the microbial population through fecal samples, identifying drug-altering DNA snippets to understand how the bacterial population modified each drug. This study suggests genetically testing individuals could shed insight into what drugs will work in specific individuals, potentially informing doctors whether or not to include certain bacteria in fecal transplants.

The future of medicine is personalized, or so claim the growing list of smartphone apps designed to monitor health markers. While true, your phone won’t get into your belly (yet). This is only the beginning of an exciting new chapter in medicine. Being able to provide exact doses at exact times will take the guesswork out of prescriptions. Many other factors play into gut health, but from a holistic point of view, this advance is certainly a game-changer.

The biology behind your office’s air conditioning war.
Up Next
The Present

When it comes to climate change, today’s airplane pollution is a real problem.