As more of us take to the skies more often and for longer trips, carbon emissions from aircraft are becoming a real problem. Currently, some 2.5 percent of total global CO2 emissions come from airplanes, and that number is on the rise. It’s estimated that by 2050, they’ll be responsible for 5 percent of the worldwide carbon budget — that’s 43 gigatonnes of pollution, a dirty mix of CO2 and nitrogen oxides. The source of all this is, of course, the fuel consumed by the craft.

To address this, Delft University of Technology (TU Delft) has announced that it’s partnering with KLM Dutch Royal Airlines on the design of a new type of plane dubbed the “Flying-V.” It was actually the brainchild of TU Berlin student Justus Benad, developed while working on his thesis. The plan is to debut a flying scale model and display a full-sized cabin section as part of the October commemoration of KLM’s 100-year anniversary. What’s exciting about the Flying-V is that it would use 20 percent less full than the most advanced plane of today, the Airbus 350. What’s worrying is that its bold shape may not fly too well. 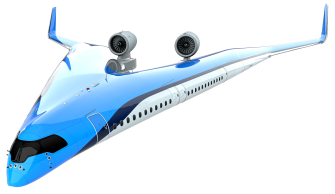 In a press release, the dean of aerospace engineering at TU Delft, Henri Werj, discussed the project:

We are incredibly pleased to be able to cooperate with our trusted partner KLM on our combined mission to make aviation more sustainable. Radically new and highly energy-efficient aircraft designs such as the Flying-V are important in this respect, as are new forms of propulsion. Our ultimate aim is one of emission free flight. Our cooperation with KLM offers a tremendous opportunity to bring about real change.

The Flying-V, as its name suggests, is shaped like that letter of the alphabet. It’s really all wing, with no central fuselage. The passenger cabins, cargo hold, and fuel tanks live in both of the Flying-V’s wings. The wingspan of the craft would be the same as the Airbus 350, though it’s about 20 meters shorter in length. Nonetheless, the Flying-V would accommodate the same number of passengers — 314 — and have the same kerosene fuel capacity — 160m3 — even though it this amount of fuel would take the Flying-V farther. The plane’s smaller overall size would incur less aerodynamic resistance.

The partners also envision the new plane and form factor as an opportunity to improve the cabin experience for passengers, though the details on this have not been announced. 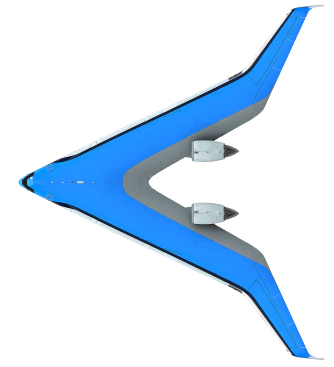 The problem with the Flying-V

An issue that could keep the plane from every becoming a reality has to do with the manner in which planes turn in the sky: They bank as they change course, one wing tipping up as the other tips down.

In conventional craft, we sit along the spine of the fuselage, and so turns are typically fairly easy to stomach. However — and this has been a problem with previous v-wing designs — when you’re seated outward in a wing far away from that center axis, banking feels far more extreme, and may feel like more of a rollercoaster than a tolerable means of getting the family to Disneyworld. Still, the actual deployment of the Flying-V is estimated to be 20-30 years off, so there’s plenty of time to assess the severity of the problem and hopefully devise a remedy.

To preserve biodiversity and ecosystems, protected areas should be connected into a gigantic World Park.
Strange Maps

The four-color theorem was one of the past century’s most popular and enduring mathematical mysteries.
The Present

The Seychelles magpie-robin is up for sale – yes, for sale – as a digital nature collectible.
Up Next
Starts With A Bang

This Is How, 100 Years Ago, A Solar Eclipse Proved Einstein Right And Newton Wrong

Not only is the Sun’s corona visible during a total solar eclipse, but so are, under the right conditions, stars located a great distance away. With the right observations, one […]